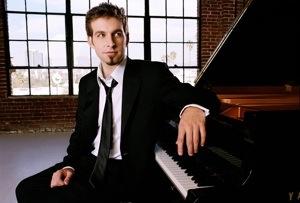 Back in the late ’50s, musician and scholar Gunther Schuller attempted to formally integrate jazz and classical music under a concept he dubbed Third Stream. It was a turbulent but persistent confluence, which will be in evidence next month in a concert by the San José Chamber Orchestra showcasing those two sometimes segregated genres, and more.

Bay Area composer Brent Heisinger believes that what jazz and classical music have in common is marvelously embodied in Taylor Eigsti, the Peninsula-bred pianist and composer who’ll perform Heisinger’s and his own works at the concert. The 25-year-old Eigsti, in Heisinger’s opinion, “is of the stature of Bach, Mozart, and Beethoven, when it comes to improvising.” And improvisation, as Schuller and Heisinger have pointed out, has been a vital part of the creation and evolution of classical music, even though many later composers and aficionados have remained adverse to it, insisting that performers stick to a paper score.

Commissioned by the SJCO, Eigsti has effectively built a bridge between spontaneous and formalized music, which he’ll present with the orchestra at Le Petit Trianon in San Jose. “I did a concert there three years ago, solo piano,” explains Eigsti, who now lives in New York City. “I tried the Keith Jarrett approach of improvising straight, for over an hour, which was a very cool experience; you kind of go into a trance. ... Then someone sent me a bootleg recording of that concert, and I came up with the idea of, What if I transcribe some of the themes, and redevelop them and turn them into a longer composed piece for chamber orchestra? I’m calling it ReTrianon, and I wouldn’t classify it as one particular type of music, because it’s inspired by a lot of different elements, with a couple of moments of improvisation.”

ReTrianon will open the second half of SJCO’s program, on May 15 and 16, and will be followed by Heisinger’s Ekta, for chamber orchestra, tabla, and jazz trio. The latter piece will feature Santa Cruz tabla and sitar virtuoso Ashwin Batish, along with Eigsti’s West Coast Trio, in which the pianist is joined by drummer Jason Lewis and bassist John Shiflett. The trio will perform jazz pieces by each of its members during the first half of the program.

“There haven’t been enough of these types of combinations,” testifies Eigsti, whose reputation as a performer and recording artist has so far been primarily associated with jazz. He’s been inspired by Third Stream–type efforts by such jazz veterans as Herbie Hancock and Wayne Shorter, but notes that some other attempts at synthesis “get too cheesy. They take the orchestra out of the development by just giving them dominant-seventh chords. But I want to do something where everyone can still take themselves seriously, even if they have to stylistically step out of their element a little bit.”

Eigsti praises his partners in the local trio, with whom he’s been gigging since he was in middle school. “When Jason [Lewis] is playing, he’s not just trying to play a drum set; he’s really kind of visualizing and realizing the whole percussion section of an orchestra. And John [Shiflett] will really explore all the textures of some particular harmony. They’ve worked with different orchestras, so they know how to relate.”

As for SJCO Music Director Barbara Day Turner, “I couldn’t be working with a cooler conductor,” says Eigsti. “She’s very open to whatever I have in mind. And you know what else? She’s a really nice person!”