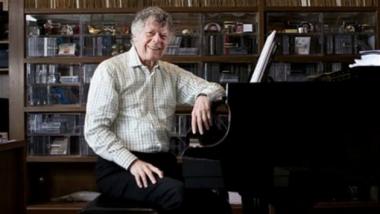 Composer Gordon Getty has never made a secret of his love for the music of the 19th Century. But the 20th Century is no minor influence on the 80-year-old Getty, whose choral and chamber works are being performed during the 10-day Festival Del Sole summer music festival in Napa, which runs July 17-26.

On July 18 at the Festival Del Sole, five of Getty's choral works will be performed with the Russian National Orchestra. The choral pieces are paired with Beethoven's Ninth Symphony, under the baton of James Gaffigan. All five Getty choral works to be performed with the RNO were inspired by poetry, with dance as an underlying theme. Included is "There Was A Naughty Boy" a work Getty wrote for chamber orchestra and chorus set to a poem of the same name by John Keats. Also to be performed is music set to John Masefield's poem "Ballet Russe."

Like many composers with a taste for choral music Getty has been deeply influenced by the legendary singer Robert Shaw. But it is another seminal figure from the 20th Century that looms large for Getty: Fred Waring. It was the popular music that Waring and his ensemble — called the Pennsylvanians —  performed that may have had a bigger influence on Getty than Beethoven and Schubert.

And that influence was communicated to Getty — the son of oil baron J. Paul Getty — via that eminently 20th Century device, the radio.

Getty listened to Waring's weekly broadcasts as child and teen. The bandleader, who died in 1984, was a college dropout and somewhat of an eccentric whose career included being the financial backer of the eponymous Waring Blender.

His career began in the 1920s and he later recruited Robert Shaw to train singers when he added a choral element to his ensemble. During the 1940s and 50s the group produced a series of hits that included "White Christmas" and Smoke Gets in Your Eyes." His arrangements of popular music were often scored for voice and mixed chorus with orchestral accompaniment. The popularity of the ensemble expanded into television in the 1950s. Waring was so popular he earned the moniker "The Man Who Taught America To Sing."

He may have taught Getty a thing or two about choral arranging and composing. "When I was a little boy and listening to the radio in the 1940s and 50s, I was deeply moved by Waring and his Pennsylvanians. In my mind there is a lot of Fred Waring in the way I write certain choral works." - Gordon Getty

"When I was a little boy and listening to the radio in the 1940s and 50s, I was deeply moved by Waring and his Pennsylvanians," said Getty. "In my mind there is a lot of Fred Waring in the way I write certain choral works."

For Getty, popular music is no factor. Instead, it is poetry that is most fundamental. Getty believes a composer only needs nominal accompaniment when setting poetry to music.

"I think logically. If you have a poem to set to music all you have to do is get out of its way," Getty said.

He also believes  he has learned a lot since he composed "All Along the Valley," for a capella chorus, in 1959, and since the Waring's broadcasts on radio and television.

"I'm the same composer — except that now I'm a little more practical," he said. "I leave a lot less to the audience's imagination than I used to."

The choral works are not the only works of Getty's that will be performed at the festival. On July 26, Matt Haimovitz and his ensemble Uccello will perform Luna Pearl Wolff's "Angel Heart," with original text by Cornelia Funke. That work will see short chamber pieces by Getty and other composers interwoven into Woolf's work.