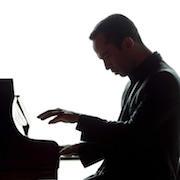 Inon Barnatan’s piano playing is fluid, like a wind-waved flag.

At other moments, in certain repertoire, it’s like an explosion, the notes spreading wildly across the keyboard, rhythms arriving from outer space, superhuman agility on display.

And then there’s the deliberate artist, delicately or grandly sweeping his way through a classical music garden that’s ordered, balanced and paced to reveal its drama in elegant, quiet gradations or unexpectedly swift and power-packed crescendos.

Joining the New Century Chamber Orchestra for its 25th Anniversary Season opener and Nadja Salerno-Sonnenberg, during her final season as music director, the Israeli pianist and 2009 Avery Fisher Career Grant prizewinner will perform Mozart’s Piano Concerto No. 13 in C-Major.

“I’ve never been as happy as a musician as I am when I play a Mozart concerto,” says Barnatan in an interview. “As great as they are, playing them with a chamber orchestra is the best.”

Barnatan is in his third and final season as the New York Philharmonic’s first Artist in Association. Trained in Israel and Europe, he is a frequent soloist since moving to America in 2006. Performances with orchestras in San Francisco, Cleveland, Los Angeles, New York, and Philadelphia have earned the 37-year-old pianist recognition, including Lincoln Center’s Martin E. Segal Award in 2015. The New York Times calls him “One of the most admired pianists of his generation.” Barnatan’s Darknesse Visible album won The New York Times’s “Best of 2012.” Rachmaninov & Chopin: Cello Sonatas, a CD recorded with frequent performance partner and cellist Alisa Weilerstein, received widespread acclaim.

Tethered to a flagpole grounded in classicism, Barnatan says that the “intertwined, cross-pollinating” exchange and listening that happens while playing chamber music demands adaptability and is instantly informative. In an environment that’s highly interactive, he’s able to “catch the current” of other players and send it back. “It’s a conversation of equals. The give and take is fierce; it’s intoxicating. You’re not a virtuoso with support, you’re playing together.”

The Mozart concerto, he admires for its simplicity and the number of surprises, like in the third movement, which has a standard, joyful launch. “Suddenly, the orchestra brings it to a screeching halt and we’re in a tragic lament, when the piano has only played a few bars.” Eventually, the piano brings the ensemble back to near-operatic joy, creating a kind of narrative that Barnatan, when it’s pointed out, finds pleasing. “What you really get from Mozart is that less is more. You can say a lot with little. That’s one of the wonderful and difficult things. His music is so pure and spare at times that what brings it to life aren’t grand gestures, but the endless variety of color and mood.”

And what brings a program to life is insightful, daring programming, an aspect Barnatan doesn’t have to worry about with NCCO. The program includes relatively contemporary, early and late 20th-century surroundings: Anton Webern’s Langsamer Satz, Philip Glass’ Symphony No. 3, and Peter Heidrich’s Happy Birthday Variations. “I didn’t set the pairings,” says Barnatan, “but the juxtapositions I find invigorating. To listen to something next to something else that’s different, wakes it up. It doesn’t influence the way that you play it, but it influences the way that you hear it.”

To prepare for a work like the Mozart, Barnatan plays it repeatedly, searching for interpretations, but guarding against over-rehearsing. Overdoing or repeating a discovery, can strip the music of its spontaneity. “The trick to staying fresh is finding the reason behind what you’re playing, not replicating the motions.” To accomplish the scope and complexity of Messiaen’s Des canyons aux étoiles, a work Barnatan recently performed and recorded at the Chamber Music Festival with Alan Gilbert and the New York Philharmonic, the task is different. Learning new repertoire is “torturous” and nurturing a piece to the moment when the music is mature and “in your bloodstream and you forget it’s hard to play,” he says is the hardest work. It is especially so with the Messiaen. “Physically and mentally, it was the most challenging thing I’ve ever done. Much of the struggle was learning it and having the (stamina).” 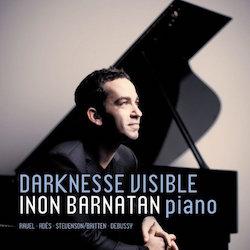 Fortunately, playing piano for Barnatan is natural — he began at age 3 — and performing is “easy, rewarding.” His initial worries after winning the Avery and upon receiving rapid, extremely positive recognition from critics and audiences upon arriving in America have eased. “I was worried I would get known for doing one thing: for Mozart, Schubert, or Albinoni. I’ve always been adventurous and was pleased when people picked that up and noticed it.” From the time he arrived in New York, his adventures included concerts and commissions of works by contemporary composers: Thomas Adès, George Benjamin, George Crumb, Kaija Saariaho, Judith Weir, and others. Lately, a lute song by John Dowland, In Darknesse Let Mee Dwell, written in 1610 and “scattered all over the piano in a way that sounds modern and unique” by Adès in a new composition, has proven captivating. “That’s based on a gorgeous, 500-year-old song. My CD, Darknesse Visible is named after Adès’ piece by the same name. He does what I try to do: appreciate and interact with the past in an active way, but with an eye firmly on the future.”

With a full schedule for the coming season, including engagements that will bring him back to the Bay Area in 2017, Barnatan is anticipating lots of time in airports. “If I didn’t have a certain easygoing nature, I’d find this life much more difficult,” he says. “I used to get more frustrated, but now, I go into zen mode. If I got upset with things that happen in airports, I’d be upset 70 percent of the time.” A comparison he likes to draw is that traveling without being overwhelmed requires being flexible, listening, and dealing with a situation according to how it is going — exactly like playing piano with a chamber orchestra.