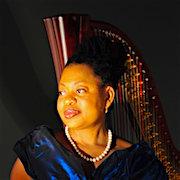 As a black woman harpist performing everything from Bach to jazz improvisations based on beats laid down by a hip-hop DJ, Destiny Muhammad’s sheer physical presence is a political statement of radical improbability. The fact that the 55-year-old, Bay Area-based musician first touched a harp when in her 30s — an ex-boyfriend’s best friend happened to be a harp craftsman — adds credence to the claim. Toss in more of her bio: raised in poverty about as far as imaginable from a concert hall in Compton, in Southern California, Muhammad was a successful hairdresser before turning her hand skills from hair to harp.

“My playing harp says I refuse to comply with any negative implication of who I should be,” says Muhammad. “To think I was badass enough to stand on harp and not back down, yeah, I’m a political statement in and of myself. Watch me, Trump, I’m saying. I’m going to bring great music. This is what America is. I lived on welfare, I don’t come from a bluesy black family. I survived Compton, Reagan, Nixon, and more.”

Muhammad not only survived, she thrived. After learning to play harp and while improving her technique, she dubbed herself “The Harpist from the Hood.” The title is a nod to her childhood neighborhood and an etymological link to “head of the family” or “god(dess)head” meanings of the word “hood.” Muhammad performed free gigs mostly at farmers markets after moving to Alameda in 1994. It was at a market that Khalil Shaheed, the founder of Oakland’s Oaktown Jazz Workshops, heard Muhammad play and invited her to join a jam session and study under his direction.

Largely influenced by jazz harpists Adele Girard and Alice Coltrane (who was married to saxophonist John Coltrane), Muhammad’s resume grew to include opening for the Oakland Symphony, performing with Gerald Albright, Marcus Shelby, Omar Sosa, Ambrose Akisemuire, Richard Howell, and Azar Lawrence, among others. She has headlined Jazz Heritage Center’s annual “Women in Jazz” concert series and is the principal harpist for the Eddie Gale Inner Peace Orchestra and the Oakland Community Orchestra.

Muhammad calls it a journey back in time. “Tarika and I worked with Dimension Dance Theater, back in the late 1990s. We looked at Medea Sirkas online and could see how what they do works with what we do in our world. It’s a beautiful opportunity to merge straight-up turf dancing with jazz and classical [string-instrument] crossovers.”

The show format will have Muhammad and Lewis present a 15-minute set, followed by short Q&A. The street dance quartet, with a DJ, will perform a similar set and Q&A. After that, Muhammad says, “The DJ lays a track down and we all do our thing together.” She says live interaction, inspired by the unknowns of the DJ, will be the ultimate performance experience. “The journey is to embody as much sonic vocabulary as possible,” she concludes.

Achievement, Muhammad says, is when “you can be happy being uncomfortable onstage.”

In rare moments, she’s made uncomfortable offstage by people who ask when she shows up for an engagement, “Where did you get that harp? Where is the harpist?” “If my instrument and personal faith can keep me from going 5150, a police term for going crazy, I end up responding by saying, “How about we hold a concert and raise money? Pay the folks behind the scenes and put some folks in houses, feed them, educate them. As for the current climate, you can cuss Trump out, but he’s not caring. How about if we get out and do things, cause he ain’t listening? But if you take care of it yourself, you play the music, he’ll listen to who we Americans really are.”

And check out Muhammad's upcoming shows at SFJAZZ.