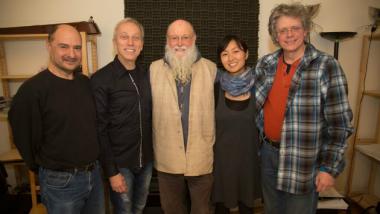 The treat to be served up the last weekend in June at the SFJAZZ Center in celebration of Terry Riley’s 80th birthday is a varied selection of his works, more like a birthday stew than a birthday cake. And that seems appropriate for the turning-80-years-old, long-bearded composer who lives, and works, on a ranch in the Sierra Foothills. He’ll be coming down from the hills for the first-ever Kronos Presents, in which the Kronos Quartet will annually present a mix of “all sorts of things we’re doing that we haven’t done around San Francisco,” says Kronos founder and violinist David Harrington, “And it’s great to inaugurate this festival with Terry, and celebrate him and our relationship, which we’ve had for the last 35 years, with many of the pieces he’s written for us.”

Several of the Riley pieces have been previously released by Kronos and will be collected, together with newly-released material, in a five-cd box set, One Earth, One People, One Love, on sale the day before the composer’s birthday (actually next Wednesday). The recordings and the weekend’s live performances will testify to both the variety of Riley’s expression and the uniqueness of his approach to music, which is credited with establishing Minimalism as a major movement in late 20th-century music.

Not surprisingly, it was Mills College in Oakland that brought composer and quartet together. He was on faculty, they were artists-in-residence, and, “The instant we met, I just had this incredible feeling that this was a person who hadn’t ever written for us but should,” recalls Harrington. “There was something about the warmth of his personality, and the vitality of his interests.”

They repaired to Riley’s Sri Moonshine Ranch, where, “There was a leak in his roof, we were dodging water drops and putting together Sunrise of the Planetary Dream Collector from his 14-beat cycles and rehearsing G Song,” Harrington recalls, noting that both these pieces are included in the new box set, the former previously unreleased. “A lot of the initial rehearsal had to do with Kronos having to think like a composer,” the violinist continues, “because he left the dynamics and phrasing so much to us. We had the basic pitches and rhythms, and from there we took over. And he got to experience us, taking this raw material he gave us, and to hear it beginning to take shape. He was very appreciative of all the things we would try out.”

Riley is also credited with introducing Kronos to an international menagerie of creative musicians, who’ve figured in the quartet’s performances and recordings, as well as in Riley’s. They included Indian vocalist Pandat Pran Nath, with whom Riley studied for several years; Nubian oud virtuoso and composer Hamza El Din; minimalist La Monte Young; dancer Anna Halprin; and tabla drum master Zakir Hussain. “Then we introduced Terry to [pipa virtuoso] Wu Man, so we get to reciprocate once in a while,” Harrington chuckles. “Wu Man will be joining us [in the first piece on the first night of next week’s celebration] for The Cusp of Magic, of which we’ll play the first movement. [The program discussed here is all composed by Riley, except where noted.] Then Zakir will be playing his solo piece for Terry, on tabla tarang [a melodic set of tablas], titled Taal in T’. Then we’re playing 'One Earth, One People, One Love' from Sun Rings, which to me is one of the greatest prayers ever written in string quartet music.

With characteristic youthful zest, Harrington continues his description of the Friday program. “We’ll be playing a piece written for Terry by a fabulous composer from Poland, named Aleksander Kościów [pronounced, ‘Kos-kee-yew’]. It’s an obrek, a Polish dance, and there’s a new instrument that’s been built for us by Jan Malisz, which we’re debuting that night for Terry, called a basy. It’s like a [three-stringed] folk cello, which Sunny [Yang, of Kronos] will play. Then comes the world premiere of Jacob Garchik’s arrangement of Baba O’Riley by Pete Townshend [of the rock group The Who], who wrote it partly in tribute to Terry’s Rainbow in Curved Air. After that, Yoko Ono has a piece for Terry called To Match the Sky. And we’re finishing that evening up with that first piece Terry wrote for us, Sunrise, with Zakir.”

Prior to the Saturday evening concert in SFJAZZ’s Miner Auditorium, Riley and Harrington will enjoy a public afternoon chat in SFJAZZ’s smaller Joe Henderon Lab, where a short program of Riley compositions will then be performed by piano duo ZOFO. These will include the world premiere of Praying Mantis Rag, commissioned by ZOFO, and a selection from Heaven Ladder, commissioned by Sarah Cahill. Both these events are free.

For Saturday evening, “We’ve invited Drew Cameron, the Iraqi War veteran who came home after active duty and has taken this idea of repurposing and transforming military uniforms into paper,” says Harrington. “He’ll be speaking about his experience over one measure from 'The Gift,' from Salome Dances For Peace, which Kronos will be playing. (One thing Terry asked when we were first thinking about this festival was, be sure there’s an activist element.) After that, there’ll be vocal group Volti, joining us for 'Earth Whispers,' from Sun Rings. We then have Six Minutes for Terry. I thought it would be great to have composers from different places in the music universe — some of who are very close friends of Terry’s, and some of who have been influenced by him in various ways — just listen to all his music, and make a one-minute distillation of their response, for Terry. There’s Jherek Bischoff, Caleb Burhans, [former Kronos cellist] Joan Jeanrenaud, Maggi Payne, Aleksandra Vrebalov, and Greg Saunier.”

The Saturday panoply continues with Escalay, composed by the late Hamza El Din. “He was one of Terry’s and our favorite persons ever,” says Harrington. “Then the Living Earth Show, who are Travis Andrews and Andy Meyerson, are joining us for a world premiere of a new version of Rainbow in Curved Air. Then Terry and [poet/playwright] Michael McClure, who’ve performed together for years, will be doing I Like Your Eyes, Liberty. Then Terry and Gyan [pronounced ‘Gee-yon’, Riley’s guitarist son] and Kala Ramnath, the great violinist from India, are going to play Turning. We’re doing a song with Terry — he’ll be singing and Gyan will be joining us — called Crazy World, which we did together at the Big Ears Festival [Knoxville]. And we’re concluding Saturday with Gyan’s new piece, called the first pancake.”

Just before our interview, Kronos had been rehearsing Salome Dances for Peace, which has resided in the quartet’s repertoire for almost 30 years. “We’ve made so many little improvements, we’ve found new ways to count the piece,” reports Harrington. “We’ve been doing movements separately, during this past year.” There are 15 movements, and the piece far outlasts any familiar string quartet. “We’ve been working on small details of articulation and balance, which for us makes a huge difference in how the music becomes the most vivid. This is one of the great masterpieces of recent quartet music, and is like this huge, enveloping experience” which will comprise the entire program on Sunday, the last evening of the birthday celebration.

“We have had so much fun, in the cosmic sense of fun,” Harrington says of his time with Riley, who’ll be present for all three nights of the celebration. “There are moments I can recall when our sound as a quartet totally changed, because of some things Terry had said.” He also recalls working a sound check with Salome at Tanglewood, back when the piece was new. “We were going for it, one of those moments when the world seems to recede. Then I look out of the corner of my eye, and I see this figure off in the distance, and it’s getting closer, and there’s dancing going on. I look closer, and it was Leonard Bernstein! So I put my instrument down, and everybody else did, too. And Bernstein shouted, ‘Don’t stop, don’t stop! It sounds just like Egyptian whorehouse music!’ I called Terry after the concert and told him the story, and he asked, ‘Can I use that in my press kit?’ And I said, ‘Why not?’”