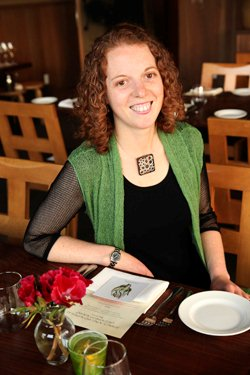 Serving up food with music comes naturally to Hannah Addario-Berry, who was pleased to find both in good supply when she came here from Montreal in 2004. Raised by an Italian-Canadian mom who taught her to cook well and with the right ingredients, Addario-Berry pursued cello study at the San Francisco Conservatory while checking out local eateries and setting up her own kitchen.

“It feels so right to me,” she says about her move. “I’m eating food that I know where it comes from, I can almost taste the soil it grew in. And there are restaurants that are embracing those values. Economically, people are trying to shop small, to support their local businesses and really be part of the community.”

But “I wasn’t seeing as much of that in the music community,” Addario-Berry continues. “With the larger presenters (I won’t say names), you look on their program guides and it’s all touring groups. I started to ask myself, what would it look like to have a movement that’s about listening local? And then, joking with a friend, we were talking about the whole locavore movement [favoring food which doesn’t travel far to market], and we said, how about Locaphonic? That was about a year ago, and then I just kind of took the ball and ran with it, finding out what’s already happening in the Bay Area, how I can support that, and what else was needed.”

Last May, Addario-Berry launched Locaphonic with a dinner at Green’s Restaurant in San Francisco, “alternating the dishes and the musical selections. [Green’s chef] Annie Somerville introduced the menu for the evening and talked about which farms the different ingredients came from, and how she’s inspired by what she finds at the [Alemany] Farmers Market each week. Then the Real Vocal String Quartet talked about their musical process, and the inspirations for the songs they’d be performing. I can’t tell you how cool it was to watch people just be entirely engaged, sitting at their tables, with the musicians in front of them. [The Quartet] started with one of their favorite songs, called ‘Kitchen Girl’, and ended with a song called ‘Sweet Honey Bee’. So we had some food-themed music.”

Locaphonic’s sophomore event, scheduled for October 27 and November 10, will involve visionary vocalist and composer Amy X Neuburg and the women’s choir Solstice, for the aural offerings, and chef Avi Cohen, for the edibles. Neuburg created the song cycle Fill As Desired on commission from the Jewish Music Festival in 2006, and Addario-Berry, who’d witnessed a later performance at the beginning of 2012, was funded by the San Francisco Friends of Chamber Music and the Zellerbach Foundation to present an expanded version of the piece, in collaboration with Cohen, who operates a catering service in the North Bay.

The inspiration for Neuburg’s creation came from her own love of food, and some curiosity about her own Jewish heritage, though she’s non-religious. “I couldn’t figure out how to add emotional content to setting recipes to music, it seemed vapid and silly, and that’s not my style,” says Neuburg. “Then I was having a talk with my cousin, who’s also a foodie, and she told me about this collection of recipes that she’d discovered in a book [In Memory’s Kitchen, edited by Cara de Silva], from this woman who’s survived Terezín [the World War I concentration camp in what’s now the Czech Republic]. They were handwritten recipes that women had been sitting around discussing [in the camp], arguing about, perfecting, as a kind of desperate fantasy. That just kind of moved me: the idea of using food as a way to survive. These women wouldn’t be making these things ever again, but they wanted to pass the recipes down somehow.”

“I’m personally interested in nutritional healing, and healing through the arts and music, so I love the idea of telling stories of healing.” — Hannah Addario-Berry

Work on the song cycle was “humbling” for Neuburg, and also a chance to move beyond her familiar mode of electronic layering of her own vocals, into writing for vocal ensemble. She’d encountered Solstice at the annual Oberlin Alumni in Concert at San Francisco’s Community Music Center; both she and three members of the choir had attended the renowned music school on that Ohio campus.”They’re lovely people, fun to look at, and they sing with a lot of enthusiasm and intensity,” says Neuburg about Solstice.

The eight songs originally composed by Neuburg for Fill As Desired have now been bolstered by two others. “I don’t actually quote the recipes, I use them as suggestions,” the composer explains. “I use the sound of German, in most of the songs, as kind of an underbed of rhythm. I use live [computer-generated] looping equipment to capture that and keep it going, and over the top I add my own lyrics in English. Sometimes I translate the recipe, and sometimes I add lyrics about my own experiences with fantasy as survival. The way I chose from these recipes was, if I read the ingredients, does it sound like music? And then does something, no matter how remotely, conjure up another story?

“For instance, there’s a flaky strudel recipe, a list of ingredients, flour, sugar, mix it, and fill as desired, and that became the title of the song cycle. There were the words ‘desire’ and ‘fill’, and I took off on the layers of meaning, layers of vocalizing. The English words that I added, you could interpret them as some of the abusive ways that a woman might be handled in her lifetime: she’s flavored and folded and fondled and fired.”

“That just kind of moved me: the idea of using food as a way to survive. These women wouldn’t be making these things ever again, but they wanted to pass the recipes down somehow.” — Composer Amy X Neuburg

The music, blended, as is most of Neuburg’s, in a gumbo of genres, is intended in part, she says, to showcase Solstice’s “beautiful Eastern European close harmonies, and that hits me right in the heart”. Some of the songs “have a children’s sing-songy quality, and there’s one that’s very romantic, beautiful lush lines and a real sense of shape, that’s my classical training.”

Addario-Berry had chef Avi Cohen develop a tapas-style set of dishes. “He looked at the recipes the singers were singing about, and the book that was the original inspiration, and created a selection of four or five savory dishes and three or four desserts, a light dinner”, she explains. “There will be potato latkes, with apple sauce, vegetarian knishes, and a smoked salmon dish with challah. There’ll also be a winter salad with root vegetables and lentils, linzer torte, and walnut rugelach. And then fresh organic fruit, and wine from a couple of local wineries. A lot of the ingredients [in the book] were substitutions for things you couldn’t get with rationing. There are pictures of people scrounging in the garbage for potato peelings.”

These performances of Fill As Desired are part of the 28th Jewish Music Festival, and Addario-Berry hopes they’ll evoke thoughts of “the beauty that was there, even in those horrific conditions” of the Holocaust. “I’m personally interested in nutritional healing, and healing through the arts and music, so I love the idea of telling stories of healing.”

As for Locaphonic, Addario-Berry hopes to take it into more celebrations of musical and gustatory taste. “Musicians are always hungry” she points out, “and restaurateurs and people in the food industry are always saying, ‘We love music, this sounds like a great idea!’”