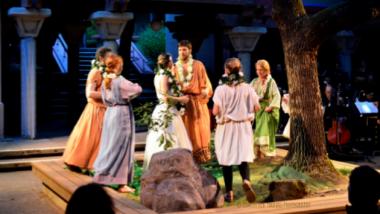 "I cannot direct opera anymore unless I find what I consider to be the inner meaning," says Marla Volovna, stage director of Marin Baroque." Volovna, who is is fascinated by mythology, will be directing the group's upcoming production of Henry Purcell's opera, Dido & Aeneas, and has her own unique take on the story and how she wants to present it.

The opera will be staged outside, in the courtyard of the First Presbyterian Church in San Anselmo. "The courtyard is unusual because it has columns around it and there is a staircase leading up to a balcony and you will see different characters come down, so it will give you a sense of depth," says Volovna. The orchestra and chorus will be on one side and the audience will sit on the other two sides. "I love to do things in unusual venues —in some kind of a setting that will evoke something more than the normal," she adds.

Music Director Daniel Canosa believes the venue is a lot of what makes the entire experience so special. "The audience gets a very intimate and personal experience because of the proximity with the singers and instrumentalists," he said. He added that when the show begins, it will still be light, but as the performance progresses it will slowly get dark, giving it a realistic and magical feel.

Although the dancers will perform in a traditional Baroque style, some of the dance excerpts were influenced by a not-so-common form of dance for Baroque opera – Japanese Butoh. (Butoh originated after World War II; it is done in extremely slow motion and the characters are all in white.) Volovna felt that using a touch of Butoh would help to portray the extremely evil nature of the witches and sorcerer, creating a kind of "theater of distress."

Volovna believes that Dido & Aeneas is filled with symbolism, and she is conveying her own unique interpretation in this production. "Dido is such an extraordinary character because she has both the masculine principle in her as well as the feminine principle. She is a hero who builds a great city and becomes a strong ruler and conquers enemies and sacrifices for her people."

In order to fulfill her vision, Volovna has some surprises planned. "Now the question is, how am I going to do all this?" she laughs. "But I am doing my best and I have added a couple of elements that should be quite different from anything you have ever seen before."

Marin Baroque's production of Dido & Aeneas takes place on Friday and Saturday, June 26 and 27 at 8 p.m. The orchestra includes Sara Usher on violin, Meg Eldridge on viola, Farley Pearce on cello, and Katherine Heater on harpsichord, and features Christa Pfeiffer as Dido, Mark Bonney as Aeneas, and Rosemary Beecher Bryant as Belinda.