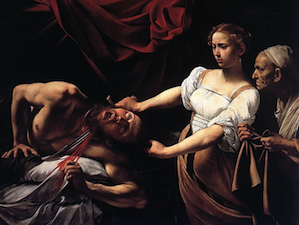 McGegan's Excursion to the Verdian Side of Vivaldi

Could this be Vivaldi, this stirring call for "Weapons, slaughters, vengeance, furies," as trumpets blare, drums roll, and the chorus explodes in "Arma, caedes, vindictae, furores!"?

Yes, it is Il Prete Rosso, the magnificent Venetian redheaded priest, opening his 1716 oratorio, Juditha triumphans in a manner seldom heard in his music elsewhere (with the exception of some bassoon concerto movements and surely others in his zillion works).

Juditha is the only surviving oratorio of the four Vivaldi wrote, and it's not being performed often enough. Nicholas McGegan, who will conduct the Philharmonia Baroque in four performances (April 2-6), and I share enthusiasm for it, both smitten a long time ago.

I first heard it listening to "classical music disk jockey" pioneer Seymour DeKoven's radio show on the Riverside Church Station — he was instrumental in the Vivaldi revival (first-time introduction really) in the U.S., always opening the program with "Arma, caedes, vindictae, furores!" It's permanent embedded in and between the ears.

For McGegan, the first live experience was in Verona in the early 1970s, at a semi-staged concert in the Basilica of San Zeno, "ladies in armor pouring out of the crypt, calling for slaughter and vengance, something that could have been an opera, very militant and heroic," he recalls. "It struck me as wild and wacky, not at all your typical soothing Vivaldi — and it made a big impression on me."

Twenty years later, McGegan recorded Juditha for the Hungaroton label, with Cappella Savaria in Szombathely's Bartók Music Hall. Alas, it's now a rarity, with Amazon.com offering just one copy as a Korean import.

The nature of the music, McGegan points out, is not incidental, it is a pointed statement in a sacred military oratorio: "This is a piece against the Turks, Venice's enemy, a patriotic call to arms."

Of course, as always is the case with Vivaldi, the music has tremendous variety to it. "Judith's aria near the end is the exact opposite of the opening chorus," McGegan says, "with the antique soft sound of English viols." The conductor also sees a kinship with Così fan tutte, "the orchestra being center stage, muted strings, and at times voices providing the lowest sound."

The story of Juditha is from the deuterocanonical (non-canonical) Biblical book of Judith about the young Hebrew widow who kills Holofernes, an Assyrian general hellbent on destroying Judith's home, the city of Bethulia. Like Salome, Judith decapitates and has her way with the severed head, but her motivation is quite different: heroic, not psychotic.

Vivaldi wrote the oratorio to celebrate the 1716 victory by Venice over the Turks in the siege of Corfu. The battle redeemed many previous gains by the Ottoman Empire, which took important lands from Venice in the Aegean, Ionian and Adriatic Seas. (Shakespeare's and Verdi's Othello/Otello is set against the same backdrop, but almost two centuries earlier — it was a thrice-hundred-year-war or even longer.)

Van de Sant's operatic roles include Tauride in Handel's Arianna in Creta and Unulfo in Rodelinda; the title role in Tamerlano, Cornelia in Giulio Cesare, and dozens more, with the title role of Rossini's La Cenerentola, Rosina in Il Barbiere di Siviglia, Olga in Eugene Onegin.

The absence of visual stimuli in oratorio performances (the works were not staged) was counterbalanced here by instrumental color and timbral variety. Vivaldi missed no opportunity to depict the warring sides of the narrative by musical means. His large roster of instruments included several that were rarely used ...

Each timbre holds a specific place in representing a mood, hinting at an outcome, or suggesting the cultural distance between the Turks and the Venetians. One of the sounds simulated is that of the Turkish zurna (a folk instrument with a short double reed, still used today in Anatolia), which was noted for its nasal sound.

The more familiar reedy sound of the oboes was strongly associated in Vivaldi’s time with music of a plaintive character. Other woodwinds, the chalumeaux, were used only on a handful of occasions, mainly beyond the Alps. Here they suggest the intended fate of Holofernes. Imitations of Janissary bands had occasionally been included in earlier Venetian operas. Here natural trumpets and timpani lend a military character to the opening and closing numbers.

The sweet tones of the recorders (which were officially banned from sacred music in Vivaldi’s time) mark pieces of a gentle character. Theorbos (arch-lutes) were valuable in giving the basso continuo a fuller sound, but they also had an association with special occasions. In Juditha triumpans they serve in one instance as obbligati, a truly rare practice in the 18th century, when their use was declining.

The role of a consort of viols (viole all’inglese in the original manuscript) is most unusual: Vivaldi reserves them for allusions to the profound and the spiritual. Many of the unusual obbligato instruments used in Juditha triumphans were also required in Vivaldi’s opera L’incoronazione di Dario (The Coronation of Darius), which had its premiere in Venice three weeks after the performance of Juditha triumphans.