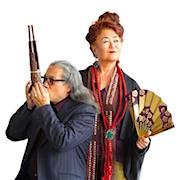 Reached by phone last week, Cory Combs, executive director of InterMusic SF, was busy putting the finishing touches on the program booklet for this year’s Music Day, happening a week from Sunday at the War Memorial Veterans Building in San Francisco.

Characteristically gorgeous and reflecting the excitingly eclectic musical offerings of the event, the booklet will also be a bit bigger in this eleventh year: it will showcase 39 ensembles, according to Combs’s count, compared with 33 last year. “We’ll be using all four stages of the Veterans Building,” Combs points out, “and we’ve rescheduled the ‘dark time.’” This allows performances to continue from noon to 8 p.m. in all four venues, as long as breaks are provided for the unionized staff, “so you can show up whenever and something will be going on, and that wasn’t the case last year.”

It was at last year’s Music Day that InterMusic SF was formally adopted as the moniker for what had been launched as the San Francisco Friends of Chamber Music, but the reason for the name change long preceded its adoption. “Although the organization started with a tighter focus on traditional classical and chamber music,” which are still well-represented, “there’s been a growing interest from our board in new music and jazz, and last year we did a very traditional Indian classical trio, which was met with a lot of enthusiasm,” notes Combs.

“But what’s really unique about this year is that we’ve centered in a theme: Colors of the Keyboard. There are ensembles where it’s a natural fit, like B3 organ trios, and jazz combos led by a pianist. We have the fun ZOFO duo, four hands on one piano, the really neat two-piano father and son duo of Mark and Bob Applebaum, and Motoko Honda, a Japanese-born pianist who will be doing original compositions with a jazz quartet. In other cases, some groups, like the Musical Art Quintet, have taken it upon themselves to meet the theme by adding a pianist to a group that didn’t always have one.”

“We were able to find Serene Han, who’s a great and talented pianist, for our Rhapsody in Blue,” says Musical Arts’s bassist, arranger, and composer Sascha Jacobsen. He arranged this version of the George Gershwin showpiece, based not on the familiar 1924 orchestral/ jazz band arrangement by Ferdé Grofe but on the composer’s original score for two pianos, which is in the public domain. “It sounds beautiful with the strings, it gives it a different color, it’s definitely more relaxed, and it works as a chamber music piece. And the parts are very virtuosic. For instance, I have the viola take the opening clarinet solo, because it has the right range to conquer that.”

Many of the Music Day performers, but not all, have a financial connection to InterMusic SF, either as affiliates, who raise money through the organization’s non-profit status, or as grantees. “Two years ago, my grant was to record our last album, Chamber con Alma,” says Jacobsen about his group’s release, available on CD Baby. “On that album was Rhapsody in Blue [in a pianoless arrangment] and also Flueurette Africaine.” The latter, composed by Duke Ellington, will also be part of the Music Day program, along with Jacobsen’s own The Singing Sands. He’s currently writing a piece, also with InterMusic SF funding, for his Trio Garufa, “a tango which is like a fantasy on my love affair with the bass, for which we’ll have a video shoot in November.”

It’s tough to choose among Music Day’s many delights, but Combs, a bass player himself, notes a premiere by another bassist, Japanese-American Mark Izu, and his Ensemble. “He’s using home film footage he and his collaborators have found, from the [wartime] internment period, where the music and film will be of equal importance. And on the classical side, there’s Nomad Session, essentially a woodwind-and-brass combination of two quartets, which will do Holst and a new commission. You get to hear the gamut of a symphonic wind section in the setting of chamber music.”

Combs reports the financial health of his organization as sound. “The grants we were hoping for came through, and we still have to look toward individual donations, some of which will happen as the year goes on. We’re fortunate to have the Wattis Foundation join us this year, they’re really intrigued by this festival, and we’ll hope for annual support from them.

“Our organizational goal is to grow this event, maybe into a two-day event, and to do similar presentations in other Bay Area locations. If we could find a no-cost-to-inexpensive venue, we could do another half-day pilot, late in the fiscal year, with a combination of next-generation and professional ensembles. That would depend on additional fundraising, and the board members and I are trying to overturn more stones.”

“I think Music Day would probably be more effective spread out over the whole year,” Jacobsen agrees. “I think it’s somewhat overwhelming for the audience to have that many groups performing all day long; nobody can possibly see it all.” It’s fun to try, though.

Mezzacappa on Glorious Ravage and Music That ‘Lives in the Cracks’

The San Francisco-based bassist, composer, music curator, and producer talks to SFCV about taking her latest composition on the road.