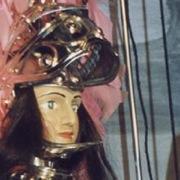 Lisa Hirsch on September 28, 2009
When is an opera not an opera? When it’s the opening work in a grand entertainment for visiting royalty ... and when it’s performed with puppets rather than putting the singers on stage.

And that’s just what you can see next month when Magnificat Baroque, in collaboration with the Carter Family Marionettes, presents Francesca Caccini’s La liberazione di Ruggiero dall’isola d’Alcina (The liberation of Ruggiero from the island of Alcina) on Oct. 16, 17, and 18 in three venues.

In La liberazione, the wicked sorceress Alcina seduces the warrior Ruggiero, who dwells happily on Alcina’s island until finally the good sorceress Melissa shames him into returning to battle — and, incidentally, to his fiancée, the warrior maiden Bradamante. The plot comes from an episode in the epic Renaissance poem Orlando Furioso, by Ariosto, which is in turn based on the medieval French poem The Song of Roland.

That’s where the puppets come in.

The Carter Family Marionettes, who are providing the staging for La liberazione, perform in the Sicilian opera dei pupi tradition, a style that flourished in the 19th century, but that stretches back for centuries. Their puppets are large, and the puppeteers control them with iron rods. The entire repertory of opera dei pupi plays comes from The Song of Roland, so the puppets are a natural pairing with La liberazione.

“I’m especially excited to be working with the Carter Family again,” Magnificat Director Warren Stewart told SFCV. “We did some shows together in the 1990s, and they were tremendous fun. Hardly a concert has gone by since then when an audience member hasn’t come up to me to ask when we’ll do another puppet show. The Carters are great at connecting with the audience and already had a very funny and engaging production of La liberazione in their repertory.”

“La liberazione is a particularly interesting project for us because of the circumstances of its creation,” Stewart continued. “We’ve done a great deal of music by women composers of the Baroque, and La liberazione, by Francesca Caccini, is the first opera composed by a woman. She was also the first woman to have a professional career as a court musician.

“La liberazione was commissioned by Caccini’s employer, the Archduchess Maria Magdalena of Austria, who was a Hapsburg married to the Medici Duke. After he died, she ruled Tuscany for seven years as regent for her teenaged son. La liberazione was an occasional piece, written for performance during a state visit by Maria’s nephew Wladyslaw, the crown prince of Poland. It would have been the opening work of a long entertainment that included a horse ballet.

“Suzanne Cusick’s research suggests that the particular episode in Orlando Furioso was very likely chosen because of the two powerful women sorceresses, as part of a process of buttressing and normalizing female leadership within Tuscany.

“The music itself is absolutely gorgeous,” Stewart said. “For example, there’s a wonderful lament for Alcina, which she sings after Ruggiero leaves her. We have a wonderful countertenor, José Limos, singing Melissa, the good witch. The part is for either an alto or a high tenor, and we’ll have a male singer as a female character who transforms herself into a male character to liberate Ruggiero from the bad witch! Above all, this opera is fun”

Puppets, gender-bending characters, and the first opera written by a woman — what more could you want?