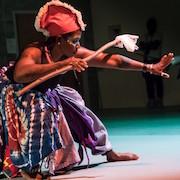 Throughout history, artists have reflected their reactions to events through their creations. Though expressed differently in other cultures, the message is often the same. In the current turbulent political climate in this country — and in the world — with so many people and ideas under scrutiny or under attack, many artists are finding it necessary to use their gifts to not only express themselves, but to try to affect a change.

The San Francisco International Arts Festival (SFIAF), which has been showcasing performing arts groups from all over the globe, alongside San Francisco and other Bay Area artists for 16 years, including music, dance, performance art, and theater, is showcasing these “statements” through the lens of this year’s theme, “Down by the Riverside, 50 Years Celebrating the Legacy of Dr. Martin Luther King, Jr.” It is the second year of a trilogy created in response to the election of Donald Trump as president, “and all that entails.”

Founder and Executive Director Andrew Wood is intensely passionate about the festival, and what he believes it contributes to the rich diversity of cultures that make up the San Francisco Bay Area. “Some if it’s just about putting on great art and making political messaging out of it,” says Wood, “and a lot of it’s about accessibility and cultural equity.”

The festival is a melting pot for local and international artists, where they not only get a chance to be in front of an audience, but also get the opportunity to check out how other artists are expressing their creativity and socio-political inquiry.

“My job is to create a context for people to be able to go and see different types of work that entertain them,” says Wood. “But there’s also a reason for it, and there’s a political aspect to it, and that’s why we do what we do.”

Since 2009, their home base has been at Fort Mason Center for Arts & Culture, which boasts a number of different venues, large and small, all within walking distance. The festival, which runs May 24 through June 3, will feature 40 different acts — including many ensembles from other countries that are making their first appearance in the U.S. — and numerous premieres.

Wood travels extensively to festivals and conferences around the world to keep current with trends in the performing arts. “The most exciting thing about it is that the performing arts are changing,” says Wood. There’s a huge technical dimension to it, there’s audience interaction, and there are so many different ways to think about and create art — including virtual reality and computers, and all the things this part of the country is famous for.”

A lot of that innovation is coming out of the Bay Area, and Wood is collaborating with local universities — where he believes the next trends are now brewing. “This is the next generation of people,” says Wood, “addressing the audience in a way they haven’t been addressed before, in a way that hasn’t been seen.”

Many of the performances in this year’s festival will be championing women, the gay community, minorities, and all the diverse segments of the population that have been recently under attack since Trump became president.

In honor of this year’s theme, the festival is featuring a collaboration between political activist/teacher/author (and former 1960s Black Panther Party leader) Angela Davis and composer/percussionist Anthony Brown with the Asian American Orchestra and Voices of a Dream (May 26), with a world premiere of Down by the Riverside: Requiem for a King.”

Pao Chang Tsai from Taiwan (May 31, June 1–2) presents Solo Date, about a wealthy businessman whose gay lover dies. His efforts to reconstruct his lover using artificial intelligence and social media bring up questions about technology and privacy that echo the recent controversy regarding Facebook’s association with Cambridge Analytica.

Building on one of this year’s most groundbreaking movements, #MeToo, the festival is featuring two female circus groups. Montreal’s Cirquantique (May 31, June 1–2) captures the era of the Roaring Twenties and prohibition in a cabaret set in Quebec, featuring music, dance, circus acrobatics, and addressing the issue of female empowerment. The all-female Los Angeles-based Troupe Vertigo (June 1–3) presents a completely different take on this issue, with five women who are constrained on an island of boxes, struggling to answer questions about confinement and freedom.

Baobab (June 1–3), merges classic, modern, jazz, and street dancing to “get out of the frame,” using laughter, talking, singing and crying to achieve liberation. These talented “street punks” have never been outside of Japan. “We are putting them in the Firehouse because it is small,” says Wood, “and we wanted a company that would just blow the walls off.” San Francisco-based STEAMroller Dance Company (June 1–3) presents the world premiere of Loserville, a queer version of The Breakfast Club, using humor and physicality to take on the issues of gender and race.

Red Hot Stories (May 27) presents tales of passion and includes opportunities for audience members to get up and share their own. South Korea’s Ambiguous Dance (May 31), who Wood calls “flat out fun,” presents the premiere of Rhythm of Human, telling the story of a Korean man trying to find his own rhythm in modern society, and expressing the view that dance is for anyone seeking to discover their inner groove. Bahiya Movement (May 26) presents Weighted Acceptance, combining dance, music, and poetic storytelling to capture the pain of oppression and prejudice often experienced by people of color. De Rompe y Raja Cultural Association (June 2) performs the world premiere of Christo Moreno, a musical adaptation of a story that shines a light on the story of slaves transported from Angola to Peru.

The Interrogation Room (May 25 and 27) is an absurdist performance piece centering on the immigration process. It invites audience members to participate in its investigations and final judgments on who is selected or rejected. Championing hip-hop artists and musicians with disabilities, Krip Hop Nation presents the world premiere of The Crossroads Experience, (June 3). Using poetry, spoken word, and a funky soundtrack, this piece tells the tale of what it is like to be a black, disabled artist in this country.

Adding a rhythmic South American flavor to the festival, Argentinian pianist Pablo Estigarribia (May 26) presents the U.S. premiere of Concert Hall Tango, playing solo and with an ensemble. Japan’s singer/songwriter/guitarist Yohei Miyake (May 24), who became known as “the Japanese Bob Marley with a Bernie Sanders ideology” when he ran for office a couple of times in Japan, singing his platform for thousands of fans, will share his views on environmental and sustainable living, and political expression through music.

The exuberant two-week festival builds bridges — not walls — between cultures.

In a Quest for Unity, Ragamala Dance Company Embraces Paradox and Difference

The dance company is blurring boundaries for Cal Performances, but also acknowledging the complexity of that act.