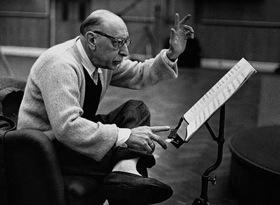 Shrinking Stravinsky Without Sacrificing His Rite

Composer Noah Luna vividly invokes the memory of being seduced by classical music at the age of 17, during a performance by the Ballet Preljocaj, set to Igor Stravinsky’s Rite of Spring, at the Yerba Buena Center. Although the music was recorded, it sounded as alive to the teenager as were the fantastically costumed pagans on stage.

“There were strange sounds wafting out from the speakers, and naked dancers,” recalls Luna, now 26. “They were scantily clad in the beginning, and during the Sacrificial Dance portion there was this woman that gets stripped down, doing this incredibly aggressive dance. And I remember being shocked at this woman moving that way, in as little as she was wearing, and then just collapsing to the ground. I thought, 'If this is classical music, sign me up!'”

Eight years later — married, classically trained, and immersed in a master’s degree program at the San Francisco Conservatory of Music — Luna found Rite beckoning to him once again. This time it took the form of an invitation from the San Francisco Chamber Orchestra (SFCO), conveyed by the Conservatory’s Composition Department head, Dan Becker, to his students and alumni. To introduce what it had christened The Incredible Shrinking Orchestra Project (ISOP), the SFCO was recruiting a team to reimagine Rite as a chamber piece for 14 players. (The 31-year-old Stravinsky had scored his 1913 original for a supersized orchestra.) Luna, much to his delight, was among the five composers chosen for the 15-month project, which will culminate in a series of performances beginning next week.

“I thought, This was a very cool composition for them to pick, because it’s so iconic to so many young composers,” says Luna, still boyishly ebullient. “I mean, it was rock ’n’ roll for orchestra! Who wouldn’t love to get their hands dirty on that piece, of all pieces?” This, even though the new venture would have to proceed without a massive wall of sound and naked dancers.

For Ben Simon, the SFCO’s energetic music director and conductor, who thought up the ISOP in an East Bay coffee shop in the company of his composer in residence, Gabriela Lena Frank, it meant a refreshing loosening of constraints. “There’s a tremendous repertoire for chamber orchestras, classical and modern, but there’s this period, 1850 to 1925, where the orchestras got very big,” Simon says. “So I thought, I’ll never conduct a Mahler symphony, or The Rite of Spring, with a chamber orchestra. The only solution was to scale it down to what we could put on our stage. But we didn’t want to make it ‘Mahler Lite’ or ‘Stravinsky Lite.’ This had to be the real piece, with different instruments.”

Each member of the composing team — Luna, fellow students Elizabeth Kimble and Winton Yuichiro White, and alumni Anthony Porter and Jonathan Russell — was assigned a section of Rite, in accordance with what Luna assumes were “the traits we exhibited in our applications, as well as who we were as composers. They gave Liz [Kimble] the more ambient, textural thing to manipulate, whereas they gave Jon (who’s in Squonk, a very cool, aggressive bass clarinet duo) the opening section, because it has all those great aggressive themes.”

Luna got “my favorite part of the whole piece,” he says, starting with the “Spring Rounds” and proceeding through the “Games of the Two Rival Tribes” and “Procession of the Oldest and Wisest One.” “I’d like to think they gave me my section because it’s got all these great jazz chords in it,” giggles Luna, who played pop-rock guitar in high school, and jazz, to pay his way through college, before embracing classical music. “These voicings that Stravinsky had are very close, clustery chords, that a jazz player might make a mishmash out of,” Luna continues, “but Stravinsky arrived at them intuitively, with that heavy driving fifth [interval] groove that I’d been dying to let loose, on some piece or other.”

The reduction of the size of the ensemble, from the original orchestration premiered under the baton of Pierre Monteux, was a challenge that Luna welcomed, since he could approach it “from a big-band-jazz point of view. I’ve got a brassy sound to make, and I just have a trumpet, trombone, and saxophone. So I listened to my Duke Ellington recordings, to see if I couldn’t get a little bit of that 1930s wah-wah into the Rite.”

The team of five brought their initial ideas to a workshop with the SFCO’s players at the Conservatory in May 2010. “Gabi [Gabriela Lena Frank] worked with each composer individually,” says Simon, “getting them moving in the right direction and thinking in colors, not how Stravinsky would have done it, had he had 14 instruments, but how you would interpret what Stravinsky did. This is something a young composer rarely gets to do, with a live orchestra.”

Simon proved “an incredible resource,” testifies Luna, “because just looking at a score, he could make suggestions right away. ... I was also surprised at how nice the [SFCO] musicians were. It was the coolest experience, to just listen to something that you wrote either succeed or fall flat on its face, with the luxury of being able to go home and change it, instead of having an audience behind you, cringing and feeling just as badly as you.”

Luna was also struck by the diversity among his five teammates.“Liz definitely draws heavily from the Arvo Pärt school of music: very kind of dark and solemn and meditative,” he observes. “She took this very adventurous approach to doing prepared-piano stuff, and inside-the-piano playing, that took a lot of setup time. [But] it was affirming to know where the line was on extended technique, that you didn’t want to cross.”

“The composers were taking notes, and the thing was being videotaped and audio-recorded,” recounts Simon. “And then we all went to dinner and kept talking shop. And all the composers went home with dozens of suggestions and ideas to improve their product. Since education, in many different respects, is very close to the heart of the mission of the SFCO, I thought it was fantastic.”

Luna continued his assignment while also pursuing his studies at the Conservatory and a day job as engraver, committing other composers’ scores to formally arrayed, printed, and bound parts for dissemination to performing ensembles. “I put everything about myself into the orchestration,” he reflects, “and even though it was very faithful to Stravinsky’s intention, there were little funny percussion things that I totally stole from [Latin Jazz master] Poncho Sanchez.”

In October, the ISOP team and the SFCO players workshopped again at the Conservatory, this time with more-complete scores and a small, live audience. “It was almost like an open rehearsal, and it was comforting to have people react so well to such different sounds coming out of Stravinsky,” Luna reports. “But there were a lot of things that ended up on the cutting room floor, that everyone’s glad of, like the use of the saxophone: It was so loud, it had to be put in a register that didn’t speak so loudly. And I’ll never forget the scowl I got from the bassoon player. She just shouted at me, ‘You’re giving me tendinitis; I’m not gonna play this the way you wrote it!’ Okay, let me change it, I can do it. I don’t wanna get sued.”

The process of making what might seem like composing-by-committee into an edifying organic whole is being completed during this week’s rehearsals. “There are three advantages we had,” Luna points out. “One is that it’s not our original music, it’s someone else’s. Secondly, we all discussed with the people before and after our sections how to dovetail the sections into each other. I got to say, ‘Jon, you know that little trill that happens at the end of your section? Could you put that in the marimba, because that’s how mine begins.’ And thirdly, we brainstormed solutions to common problems, like, how do you make your strings sound big, or get the brass to get quiet? We all kind of made a pact to remain true to Stravinsky’s intention, not to try to do something avant, for avant’s sake, or to draw attention to ourselves.

“And I think our saving grace is that Rite is a century old,” Luna continues, acknowledging the fabled chaos among its Paris audience in 1913, prompted by the challenging music and the Ballets Russes’ sensual choreography and costuming. “There’s been enough time passed that we’re not trying to one-up it any more. We’re just trying to do something different.”

Next week’s program will also include alternatively instrumented versions of a Vivaldi Concerto for Lute and Viola d’amore (with David Tanenbaum on guitar and Simon on contemporary viola) and Beethoven’s Variations on “Là ci darem la mano.” Gabriela Lena Frank’s Grammy-winning Inca Dances will be performed as written.

The SFCO’s Simon has created a separate ISOP Web site and has already cast next year’s transformation, of Prokofiev’s Romeo and Juliet. Now he’s excitedly looking forward to other creative shrinkings. “Mahler’s Symphony of a Thousand would be very cool,” he offers. “Wouldn’t it be great to make it a Symphony of a Dozen?”