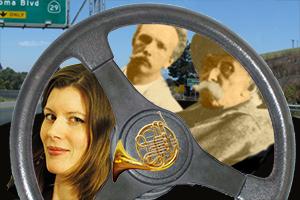 If you plan to drive up I-80 to the next concert of the Vallejo Symphony to hear virtuoso Meredith Brown, you must be prepared to play her second-most-important instrument. No, not the French horn, but the one in which “Freeway Philharmonic’” members are extremely practiced: the steering wheel.

Brown is one of seven musicians depicted in Tal Skloot’s film Freeway Philharmonic, which depicts the struggles of freelancers to “balance a love of music with a road warrior lifestyle that often requires traveling hundreds of miles a day to rehearse, teach, and perform.” She is the principal horn for the Fremont and Napa symphony orchestras, in addition to the Vallejo, and she was the silver medalist in the 2009 International Horn Competition of America. But she also plays in seven or more orchestras, as well.

When I spoke to her on the phone, naturally, she was in her car, driving some of the 35,000 miles she covers in a year for the love of music. She explained to me why the Vallejo Symphony is “an undiscovered jewel,” according to Music Director David Ramadanoff, who told me earlier that in his 27 years with the orchestra, he has developed “a special connection” with local musicians. Quoth Brown:

It attracts some of the very best players. [Attendees] will really see a higher quality performance than you might expect from a group that size — much higher. We have one of the best conductors in the Bay Area, who is incidentally giving a great preconcert talk at 7, before the concert. If you want to know a little more about the music and some things to listen for in the piece, it will enhance the listening of the concert. And I’ll be taking part in that as well, for the [Richard] Strauss portion.

The Strauss concerto people may not know well, even though it’s probably the most-often-played horn concerto in our repertoire. It’s a really amazing piece. It’s been great for me to rediscover it lately through getting to perform it with an orchestra. I normally will play sections of it for an audition. When you experience it in abbreviated form, you don’t get the effect of the whole piece. It’s incredibly well-developed, especially considering Strauss was only 18 years old when he wrote it for his, [father] Franz, who was one of the premier horn players of his time. His father liked the piece, but didn’t ever perform it in public because he said there were too many high notes!

Brown loves the music both for such technical challenges and for its inherent beauty.

When you put your thumb over the end of a hose, what happens to the water has to happen to our air, when we play these high notes. Our lips are the hose and thumb; we’re just decreasing the diameter of the hose.

But the Strauss piece has got some great melodies, as well. The guy really knows to write a melody. I also like that in the second movement, he jars in a kind of wacky theme in a completely different key. He goes from a key with lots of flats to one with lots of sharps in it. He brings in the heroic nature of the horn into a movement which is typically tender and lyrical.

In addition to the Strauss, the program features two Mozart pieces: the Symphony No. 39, and, to launch the concert, the overture to his opera Don Giovanni. The opener will be conducted by Ramadanoff’s wife, Pamela Martin, herself an accomplished batonista. She loves the way the piece “sets the idea of drama and comedy” in “high contrast.”

If you decide to steer your way to Vallejo, don’t forget your car keys. You’ll need them in E-flat for the Mozart symphony.