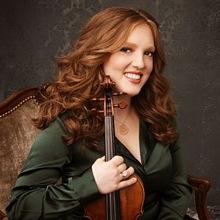 Verve and Variety: It's Hard to Pin Down Rachel Barton Pine

A couple of months after her Sacramento Philharmonic reunion this week with Michael Morgan, Rachel Barton Pine will be feted in her hometown of Chicago, where Morgan had mentored her as a precocious, teenaged violinist in the 1980s. With characteristic enthusiasm and intelligence, she anticipates the gala, which will celebrate her reception of the Great Performer of Illinois Award.

“It’ll be a really cool concert, at the big Pritzker Pavilion in Millennium Park,” says the 35-year-old Pine. “The first hour will be with my Baroque trio [Settecento], with harpsichord and viola da gamba; the second hour will be soloing with the Illinois Symphony [conducted by Karen Deal]; and the third hour will be with my Metal band [Earthen Grave]. And I’m gonna have a different outfit for each set. We’re gonna go from flowing silky clothes, to a nice modern fashionable concert gown, to black leather.”

She releases a giggle before going on to account for the corresponding change of instruments: from a Baroque violin with gut strings and a viola d’amore with Settecento, to a Guarneri “del Gesu” once owned by Brahms affiliate Marie Soldat, to an electrified Viper manufactured by rock musician Mark Wood. Pine has performed and recorded in all these contexts before, but this will be the first time she’ll have showcased them on a single evening.

Ever-curious and adventurous, Pine will try something else new this week in Sacramento, opening for Berkeley-bred fusion guitarist Charlie Hunter at the jazz-friendly Harlow’s Restaurant and Nightclub on May 12, three nights before her Philharmonic gig with Morgan at the Community Center Theater. At the club, she’ll solo on Blues Forms by the African-American classical composer Coleridge-Taylor Perkinson, whom she got to know in Chicago before his death in 2004. “I’ve performed that piece all over the world in classical concert halls,” says Pine, “but playing it in an actual jazz setting will give a different feel to it.”

Although Perkinson’s approach was imbued by both the jazz and classical influences he grew up with, Pine has recorded older classical music by black composers for the Chicago-based Cedille Records label. With Morgan directing his Sacramento Philharmonic, Pine (who has also appeared with Morgan's Oakland East Bay Symphony), she’ll register another personal first on May 15, performing one more jazz-tinged masterwork, the Suite for Violin and Orchestra by William Grant Still, who is often referred to as the “dean” of African-American composers. She’ll also play Prokofiev’s Concerto for Violin No. 1, in D, “which has as much of the fiery stuff as some of his best music, but also real moments of delicacy.”

It was Morgan who introduced the young Pine to the “neglected [black classical] segment of the repertoire” during his tenure as principal conductor of the Civic Orchestra of Chicago and hers as the ensemble’s concertmaster, a post she assumed at age 15. “I learned so much about the art of interpretation from him,” Pine remembers. “He always made sure the music came to life and was really exciting, to move the listeners as much as possible.”

Having started on violin at age 3, Pine was already an award-winner by the time she came to Morgan. But she was also a fan of the loud, dramatic forms of rock that developed earlier in the ’80s, driven by bands like Berkeley’s Testament and L.A.’s Megadeth, associated with the genres of Thrash and Heavy Metal, respectively. Later, after winning prizes at the Bach and Paganini violin competitions in Leipzig and Genoa, Pine came to realize that some of her rock heroes were impressively hip about classical music.

“One of the most fun stories was, I was backstage with Megadeth, and their lead guitarist, Marty Friedman, said, ‘You know what I’ve been into lately? It’s the Ysaÿe violin sonatas!’” Pine shares this tale of erudition when she guests on rock radio stations, helping to promote Earthen Grave, the “Thrash Doom Metal” band that she helped form in 2008. “People who are looking for more intensity in their music, like Metal artists and fans, are gonna look towards classical as a music that’s already achieved the ultimate in intensity,” Pine points out. “And then they’ll try to take those elements and incorporate them into their style, to maximize the potential of their genre.”

The violinist will facilitate another form of outreach to younger generations by visiting schools and colleges in the Sacramento area between her jazz and classical dates. And she maintains an active, attractive presence on the Web, with both classical and rock sections on her site. “Having performances up on YouTube, it’s almost like I can share my music with people all over the world, in cities where I might not happen to be coming to perform,” she says. “Microblogging is great, because I can post a Twitter from my cell phone and it automatically updates my Web site, my MySpace, and my Facebook, as well as my Twitter. And on Facebook, I might say something about how I’m practicing a particular piece, and then a couple of kids write in and talk about how they’re learning that same piece, and I can engage them in dialogue.” In the same vein, her Rachel Elizabeth Barton Foundation (from her birth name) funds an instrument loan program, grants for education and career, and curricula inclusive of the contributions of black composers.

Then there’s last year’s publication, by Carl Fischer, of The Rachel Barton Pine Collection, with transcriptions of some of her original compositions, arrangements, cadenzas, and editions, along with a cover-mount CD of piano accompaniments. Her originals “are very virtuosic and could only be played by advanced players or professionals,” she realizes, “but I still think it may be fun for people who are not quite up to performing them to still fool around with them. And as far as colleagues and young artists coming up, I really wanted not only to share this repertoire with others who might want to play it, but also to encourage other violinists to create their own repertoire, because it’s the most personal music-making you can do. ... There’s no reason not to take a little bit of time to explore your own voice. So I’m hoping my book will serve as an example, and kids might take a look and say, if she can do it, maybe I can do it, too.”