Electronic music is more mainstream than ever, appearing not just in new music concerts, but on street corners, in clubs and stadiums, through video and film or streamed on the internet in today’s overwhelmingly digital universe. How, then, does the San Francisco Electronic Music Festival, in its 19th iteration, find artists who travel off the perpetually widening, beaten path?

The answer lies largely in the organization’s eight founders, who in 1999 coalesced around a mission to discover groundbreaking sounds rising from ambient, rhythmic, atonal, melodic, and any other means in addition to electronic imaginable. Festival history displays the results of their individual pursuits to find eclectic artists: clipping., zoviet france, William Basinski, Dieter Moebius, Christian Marclay, Maja Ratkje and others. In a rare, positive outcome of groupthink, local, national, and international artists participating in the three-day series of performances at the Brava Theater Center display many styles and approaches: modular synthesis, concrète experimentalism, psychoacoustics, soundscapes, electroacoustic environments, ambient noise, and improvisation.

“Last year, for some reason we had more old school modular synthesizer people,” says founding member/composer/performer Pamela Z. “This year one thing in common is some of them combine their voices with electronics. Always, we curate for a demographically diverse group: race, age, gender, everything. In the past, the electronic music world has been largely white and male.” 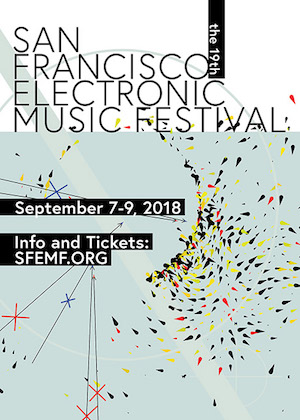 “We added her in because she makes lovely music,” says Z. “It’s dark and moody. She’s a trumpet player, although she probably won’t play it on Saturday when she performs at the reception. She uses her voice to create thick textures and layers those elements with electronics.”

Reflecting on other artists included this year, Z says, “There aren’t a lot of people who have literalism in their use of voice. They’re not channeling towards a verbal message. The change [that represents the genre’s evolution] that I see is the diversity of people who’re doing work and whose work is getting represented: numerous women, people of color. In that sense, there’s a broadening of where this music is coming from.”

It’s coming via a diaspora that includes electroacoustic multi-instrumentalist Glochids, aka James Roemer. The Arizona-now-Oakland-based composer whose identifier — cactus quills (glochids) — are occasionally used in his work excels in subtle shifts and unusual textures. “The juxtapositions of different colors, the unidentifiable-ness of the sound sources that a video makes very clear are beautiful in how they enter and change,” says Z. “There’s a composerly way the layers are structured. The intentional working with time, changes in intensity that are adept and carefully constructed to build sound is what I hear and appreciate.”

Robert Aiki Aubrey Lowe arrives with a background that includes time in a metal band and explorations that combine modular synth with voice processing. In talks he has given, Lowe explains why he views synthesizers and the human voice as similarly organic. Both use electric impulses to make sound; one generated by manmade machinery, the other by biological signals sent by the brain to the nervous system to create action. His warm, near-falsetto voice, Z says, is striking, emotional.

It’s most often true that classical training underlies a number of festival artists whose practice has evolved to include feedback systems, electroacoustic experiments and the use of multimedia films and performances. Julie Moon and Adria Otte performing as OMMO, make use of voice with analog and digital electronics. Improvisation, theater, and storytelling address their Korean-American experiences. “They’re both classical, high-caliber musicians. Adria is a violinist and doesn’t play it very much anymore and Julie is a virtuoso pianist. The breadth of their musicality extends to these instruments. Layers of whispering and murmuring go into their deep musicianship. They think about their work from a cultural point of view. I don’t know if a listener will pick that out from the work, but it’s a driving motivation if you talk to them.”

Although most of the artists don’t dally in long introductory or interjected comments onstage, Z says audiences in the Bay Area find their entry into electronic music easily and without hand-holding. “We’ve always had enthusiastic, curious audiences coming to the festival. People who have a different fan base — a base other than electronic music — come because we always bring a wide range of people.”

Casting a net with breadth and a bit of bravado, the 19th festival likely offers opportunity for a surprise catch.