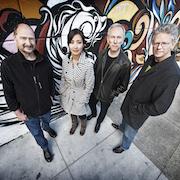 Youth Speaks Through Poetry and the Kronos Quartet

One act to rival the heartwarming uplift of an old dog still able to learn new tricks is an old dog learning new tricks from a young dog.

“I was wondering how we could fit in with them, these great, young performers,” says Kronos Quartet founder and violinist David Harrington, about the contemporary string quartet’s work with the young poets of Youth Speaks. “You find new ways of interacting. There’s a song that Tassiana (Willis) sings with us and I feel the sound of her voice in the hair of my bow. It’s a beautiful feeling.”

If the artists will forgive the canine comparison, there’s more than one reason to celebrate the San Francisco Performances collaborative project, Echoes.

The 60-minute work includes poetry, music, dialogue, and recorded street sounds that aim to bring the aural echo of San Francisco into the concert hall, according to San José. “The real trail we are following is the Echoes of the City; in the day to day, on the street corner,” he says. Add to that, the hidden echoes carried throughout history and heard in what San José calls “ghosts,” or the current voices of young people of color who have all too often been left outside of center stage, mainstream conversations.

The topical hub of the project, gentrification, serves merely as a jumping off point. Change over time, rapid expansion of an urban footprint — the tempo of renovation alone threatens to drown out or literally brick over history — triggered a question Willis posed to her fellow collaborators: What will happen when there are no more echoes in our City?

San José says the thorny frame of under-represented voices gave fruit to the proliferation of ideas and themes generated by the musicians and poets. He and composer Clay worked in a call-and-response fashion to create structured writing workshops that were sonically reshaped to result in “a big block of music” and “a draft of text.”

Harrington says he’s not sure he can find words to describe the music, but nevertheless, “twists and turns” applies to its development. “It has to do with learning the timbre of the poets’ voices, learning how they enunciate and their presence. It alternates between rhythmic, chordal, incredibly melodic. Danny is working off the words and giving the poets a launching pad.”

Clay, he adds, is amazingly flexible. “He has strong ideas as a composer, but they never control anything. He knows where he wants to arrive, but he’s not wedded to notes or rigid in how he gets there.”

The poets respond to Kronos in refreshing manner. Often, a chord, accent, or tonality of the combined instruments provokes a fluid energy stream or a quietness that is arresting. “They respond as wonderful listeners,” Harrington says. “I’m not sure if any of them have performed with a string quartet before, probably not. So, we’re getting these incredible poems and performances, but we’re also getting a new way of listening to our work from them.”

Maintaining that back-and-forth river, valuable in any collaboration, is a precious task and perhaps rare in a project that brings established, professional musicians who are mostly white and might assume privilege or claim power into the same room as young vocalists and people of color. Credit, to some extent, San José, whose role it is to balance integrity, ambition, and race- and age-diverse communities coming together. “No, no, never a concern,” says San José, in response to a question about worries he may have had going into the project. A show with younger people of color at the center and with the ideas emanating from there was the centralizing purpose. “That was the thrill, excitement, and kind of the base aesthetic idea. The continued inspiration was that all [of us] were about making it fluid, as opposed to one piece backing another.”

With only one performance, the complex operation leaves a question even before its premiere: Will this be a one-off? San José says the work being done in rehearsals now is simply the preparation for a dialogue between live performers and an audience. He hopes the chamber opera “speaks to folks enough that it goes elsewhere in the Bay and beyond.”

Harrington says the poets provide access to something central, which is happening to marginalized people in our country; to topics that, for better or worse, compose ongoing conversations in the larger world. “They’re tapping into being left outside of the conversation, of the news. There’s a certain amount of righteousness in their stories. I wrote to one poet after a rehearsal and told her it was the best thing Kronos has been into since performing “Howl” with Allen Ginsberg at Carnegie Hall (in 1994). It’s the world they’re growing into and we are a part of it.”