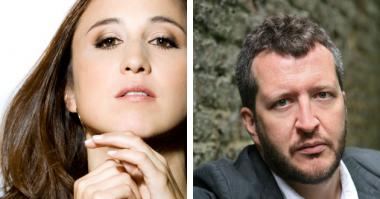 Thursday’s Berkeley Symphony concert, more than anything else, brought home the wisdom of Milan Kundera’s assertion that “happiness is the longing for repetition.”

The two halves of the evening, nicely presented by Music Director Joana Carneiro, were works separated by 104 years of stylistic evolution: Thomas Adès 1997 Asyla and Tchaikovsky’s Pathétique. But more important, both works to me exemplified the true meaning of Kundera’s aphorism: Happiness is not repetition; happiness is the longing for repetition.

It is these structures that build anticipation for new events by their recurrence — a kind of repetition that includes longing (the anticipation of an attractive-to-be sound) within their DNA, so to speak.

Adès repeats themes as well. There are several in the 24-minute Asyla, but they don’t jump out at you.

Soon into the work, a dotted-rhythm horn phrase appears and recurs in woodwinds and strings, but surrounded off-and-on by a battery of percussion emanations. In the second movement, descending, whining motives provide a passacaglia-like structural coat hanger. The third movement (Ecstasio) is described by annotator Thomas May as “a night of club raving and excess in the London of the 1990s.” Whatever its associations (such as the titular insane asylums), its kaleidoscopic-shifts and splendid surprises are seamed by recurring 4/4 rock drumbeats.

The final movement reminds me of another recurring element in the work: the use of extreme ranges in usual instruments. The low ones are of the greatest interest, especially some spooky growls emerging from a bass oboe. Bartokian woodwind sighs, super-high strings and pops on the piano generate a difficult-to-follow theater a la Harold Pinter: a cornucopia of menace.

All but one of the 15 concert attendees I randomly interviewed during intermission liked the work, especially the last two movements.

Comments included: “there was a narrative thrust … something was about to happen,” “spacy,” “complicated, generates intense and mixed feelings,” “I lived the ups and downs.”

One concert goer thought the music was “expressively Nietzschean” — a reaction that perfectly described the loud major-to-minor chord at the finale’s conclusion that seemed to reference Strauss’ Also sprach Zarathustra.

Carneiro handled Adès’ very difficult work well, as did her musicians. There must have been considerable rehearsal time involved, which I’m glad was not diffused by preparing a third work for the relatively short program.

The Tchaikovsky received a creditable rendition, overall, with Carneiro maintaining a laudable sense of drama that brought forth solid cheers at the conclusion. I was a bit disappointed with her tendency to speed up at climaxes. Those are usually my favorite parts, and I would prefer to luxuriate in them, but Carneiro’s is a valid approach.

But was I “happy” from the Tchaikovsky? No. Repetition is delivered by the composer in spades. Almost every melodic fragment repeats itself immediately, sometimes dozens of times. And of course there are beautiful melodies, some less internally repetitive or with more harmonic variety to counteract the repetition. For many seasoned listeners, I suspect, this well-known staple brought little “longing for repetition” — there is more than enough for a full belly.

On the other hand, I’m dying to hear the Adès again and again. I must be extremely happy now, right? Well, I would be ecstatically happy if the next time a worthy recent work like Adès’ is programmed, a movement of it would be repeated, like they used to do with successful pieces like Tchaikovsky’s in the old days — before Kundera discovered the secret of happiness.