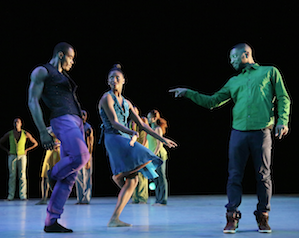 Alvin Ailey Brings Down the House

The return of the Alvin Ailey American Dance Theater for its second engagement at Zellerbach Hall since Robert Battle took over the artistic directorship is, to judge from Tuesday’s opening, a rip-roaring audience success. The dancers look more gorgeous than ever, taking precision and rapport to new levels.

Battle warmed up the crowd and set the tone. Introduced by Cal Performances Director Matias Tarnopolsky, he cracked jokes and asked the audience if they liked his necktie. They liked — everything. It seems so mean and picky to wish for more emotional heft, more implied narrative, on the program. Battle both choreographs and courts work that displays his company’s power, particularly that of the men. In/Side, a solo danced by the excellent Samuel Lee Roberts to Nina Simone’s rendition of Wild is the Wind, combines twists of the body and incredibly fast spins. The dancer is the wind and the person who’s caught in it, and it’s tremendously entertaining, if cringe-inducing. When he drops to the floor, the smacking noise sounds intensely painful (Roberts rises unscathed over and over, and does the whole thing again). In the other piece, Strange Humors, with music by John Mackey, frenemies Renaldo Gardner and Michael Francis McBride sometimes egged each other on and sometimes watched warily. The tension between them fired up the pyrotechnics, while the sporadically united moves of their arms and torsos suggested a certain inevitable rapport.

In both of Battle’s dances, the emphasis is on derring-do, and such is also the case in Kyle Abraham’s Another Night, set to Dizzy Gillespie’s A Night in Tunisia, which opened the evening. A full-company work, it has more modulation than the other two, despite the driving percussion of Art Blakey and the Jazz Messengers. Another Night gets its mojo working with a come-hither saunter from Belen Pereyra, in a blue cocktail dress, and expands to 10 dancers.

In Another Night, they cover a remarkable amount of acreage within the space of a stage. Every arm and leg seems to go on forever, and every move, whether a kick or a leap, a stretch or a plié, is like silk. The dancers wear a great range of colors, designed by Naoko Nagata with lighting by Dan Scully. They flash by in reds, purples, yellows, blues, greens. They rarely stop, and they never stop amazing. Hope Boykin, Kirvin James Boyd, Jacqueline Green, and Jamar Roberts, all 6-feet-3 of him, were particularly exciting.

That the modern-ballet repertoire staple Petite Mort, choreographed in 1991 by Jiri Kylian for his Nederlands Dans Theatre, has made it to Ailey is an encouraging sign. Although totally different from Paul Taylor’s Arden Court, which Battle took into the repertoire last year, it shares its virtues of terrifically innovative choreography and the lineaments of a story. Petite Mort is about sex and about as sexy as it gets. There are six couples in flesh-toned underwear. The men play with long, flexible swords. The women arrive under cover of a big cover that the men hastily spread on the stage. It’s like magic. The women’s hips thrust forward as they face the men; their legs flex and open as, in the men’s arms, they face us.

In the next scene, the women are in lovely gowns, and the tune is the theme from the movie Elvira Madigan, if you’re old enough to remember (the entire dance is to Mozart). But the women are actually posing behind shells of gowns, which are on casters, rolling back and forth on the stage. It’s pretty funny, and yet there are a lot of points being thrusted and parried. There’s a symbolic dig at artifice and phony respectability, but the women in their undies exhibit a rather tender fondness for these shell gowns, these personas. The men are towers, or pillars, or maybe swords of strength, yet they tenderly lie on top of their partners and seem to fly above them, like angels. The sexiness is emphatic, and so is the ambivalence.

Alvin Ailey’s 1960 classic, Revelations concluded the evening, looking like a premiere — fresh and perfect. It brought the house down.