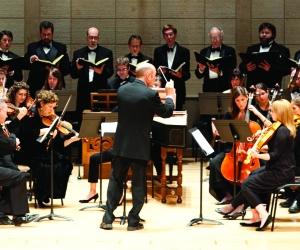 Take an assortment of works by J.S. Bach, add in a first-class orchestra and chorus, season with four fine soloists, appoint a deeply musical and experienced conductor to lead the program, and you have the recipe for a concert both moving and delightful. That’s what Music Director Jeffrey Thomas and American Bach Soloists put together for their final program of its regular season, heard Friday at Berkeley’s First Congregational Church — and, for that matter, for pretty much all their concerts.

This particular program told the Easter story through Bach’s music, though not through the composer’s mighty passions. Instead, ABS centered its concert on the Easter Oratorio Kommt, eilet und laufet (Come, rush and run), buttressing it with the Sinfonia from the cantata Wir danken dir, Gott, wir danken dir and the double chorus Nun is das Heil und die Kraft (Now is the salvation and the power).

The cantatas Christ lag in Todes Banden (Christ lay bound into death) and Ein feste Burg is unser Gott (A mighty fortress is our God) opened the program. Christ lag is austerely and rather darkly scored, its strings, cornetto, and trombones seemingly mirroring Christ’s death and the meaning of death for humanity — and yet it still conveys the message of hope present for Christians in the Easter story. Ein feste Burg’s mood is more joyful, its spirit more that of the church militant and the drive of the church for victory over Satan and sin.

The Sinfonia may be best known to the general public in its electrifying 1968 arrangement for Moog synthesizer by Wendy Carlos, but it’s at least as exciting in its usual instrumentation of organ, strings, trumpets, oboes, and drums. Organist Corey Jamason gave a fine account of the organ part, though, alas, the orchestra had to hold back noticeably so as not to overpower the small organ used in the performance.

The orchestra is first-class, playing with spirit, superb ensemble, good intonation, and virtuoso flair in the solos.

Kommt, eilet und laufet is unusually and explicitly dramatic for a sacred cantata, owing to its secular origins as a birthday cantata for the Duke of Saxony-Weissenfels. Saints Peter, John, and the two Marys all participate in the drama following Christ’s burial and resurrection, with Peter’s and John’s initial joy at the resurrection contrasting sharply with the deep sorrow of the Virgin and Mary Magdalen at Christ’s death. Nun is das Heil und die Kraft brought the program to a triumphant conclusion.

Cheered to the Rafters

The large audience responded enthusiastically to each of the individual works and gave ABS a standing ovation at the close of the concert. And why not? The orchestra is first-class, playing with spirit, superb ensemble, good intonation, and virtuoso flair in the solos. Sandra Miller was especially good in the long flute obbligato in the Easter oratorio’s soprano aria “Seele, deine Sperzereien,” and the entire oboe/oboe d’amore/oboe da caccia section of John Abberger, Debra Nagy, and Luke Conklin played like champs throughout the concert. Trumpeters Kathryn James Adduci, Nathan Botts, and William Harvey added great energy and sparkle to the program, especially to the Sinfonia.

The ABS Chorus sang incisively and with beautiful tone.

American Bach Soloists also had a fine vocal quartet of Kathryn Mueller, soprano; Judith Malafronte, alto; Jon Lee Keenan, tenor; and Tyler Duncan, baritone. Mueller’s light soprano sounded almost boyish in her first duet with Malafronte, but took on greater weight later in the program; she sang throughout with lovely tone and easy agility. Malafronte brought dark tone and considerable authority to her solos, with special dramatic urgency in the role of Mary Magdalena. I wish both had been positioned in front of the orchestra rather than behind; they were covered by the orchestra too often, and not helped in this by the resonant acoustics of First Congregational Church.

Keenan’s bright and beautifully projected tenor lent itself well to the tenor arias and duets; Duncan sounded less than perfectly at ease with the fioriture in some of his solos but nonetheless sang with lovely tone and line. The ABS Chorus sang incisively and with beautiful tone. Jeffrey Thomas conducted stylishly and with vigor, stepping out of the spotlight during solos while keeping the ensemble in excellent balance.