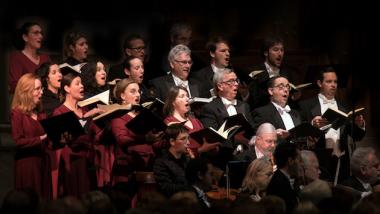 The American Bach Soloists gave a full-dress treatment to J.S. Bach’s motets Sunday, April 2, at San Francisco’s St. Mark’s Lutheran Church, in the third of four performances around the Bay and up to Davis. The men wore white tie and tails, and the women singers of the American Bach Choir sported matching robelike crimson dresses. The punctilious attention to detail extended to conductor Jeffrey Thomas’s carefully curated selection of works and his deeply informed and closely argued program notes, where issues of scholarly point and counterpoint were meticulously laid out.

The Bach motets, as the conductor Philip Herreweghe remarks in his liner notes to a La Chapelle Royale/Collegium Vocale recording on Harmonia Mundi, pose an alluring conundrum. While they are among the composer’s “most consummately finished works” and “constitute an absolute summit of Western polyphony,” writes Herreweghe, “their number, in particular, has been the subject of the most varied assertions.”

Thomas enthusiastically took up the issue himself, crediting portions of these motets to Telemann and Johann Kuhnau while parrying charges that some disputed sections might be the work of other Bach family members. Fittingly enough, the concert opened with an outlier, Der Gerechte kommt um, the only choral work on the bill not written for a double chorus.

Intriguing as all the scholarly and historical back-and-forth may be, the audience came to be enfolded in the sometimes seraphic, sometimes hypnotically dense textures of this extraordinary music. It took a while for that kind of transport to take hold Sunday. But when it did, in a splendid account of Komm, Jesu, komm, the architectural expanses and expressive powers of Bach were mapped out in glorious fashion.

Listeners who followed the text were rewarded with the moving specificity of Bach’s settings, exquisitely realized by the singers and musicians. Dying, pianissimo phrases captured the line “my strength is fading fast,” followed by the yearning uplift of “and I long for thy peace.” A “thorny path” brought on chromatic complications that melted away in the almost waltz-like grace of the gorgeously expansive “Thou art the way, the truth and the life.”

Close textual attention was by no means required to feel the grace and impact of the performance. Grounding it all was the sheer sonic pleasure of voices operating in consort, with antiphonal call-and-response and layered structures of elaborate counterpoint.

The singers came and went from separate entrances at St. Mark’s Lutheran, underscoring the symmetrical design and carefully deployed opposition of the double-chorus works. With the women positioned forward and the men behind, the spatial character of the music and acoustical properties of the church were largely in gratifying accord. The voices blended handsomely, with the men only occasionally, in the busiest passages, slightly buried. The doubled instruments supplied firm but demure support.

The orchestral players found their moments to shine in a pair of transcribed trio sonatas, originally written for organ. The invaluable violinist Elizabeth Blumenstock led the way in the first of the two, although her fiddling partner Jude Ziliak’s duller tone and wobbly intonation undermined the effort. The better of these two interludes came after intermission, when violist Tekla Cunningham and oboist Stephen Bard spun out long, amber-tinted lines and pertly articulated phrases.

Those two breaks in the vocal action were breathers in rich part-singing that was the predominant order of the day. Thomas led his forces through seven motets in all. The most exalted and complex, Singet dem Herrn ein neues Lied, came last. In the first movement of this “new song,” the dazzling overlay of voices rose and intersected like the ribs of a Gothic cathedral vault. The transparency and urgency of the voices were positively wondrous. The liquidly shifting harmonies of the chorale supplied a sunlit calm before the vigorous, crisply voiced praise song and final “Hallelujahs!”

Ich lasse dich nicht, which preceded it, was comparably fine. The taut symmetrical phrases of the opening line (“I will not let you go, unless you bless me, my Jesus”) opened into some of the loveliest music of the afternoon. When the women’s voices floated angelically above the churning male lines below, the sense of liberation and consolation poured through the sanctuary. The closing chorale was an emblem of faith, simply and feelingly expressed in a melody of surpassing beauty. “And may I always,” it ended, “always thank you.”