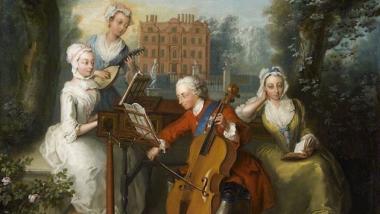 Like many works of its era, Handel’s Parnasso in festa invokes the gods to celebrate some milestone in a prominent and favored patron’s life. In this case the occasion was the 1734 wedding of Princess Anne, daughter of Caroline of Anspach, Queen Consort to the English King George II. The groom, for the record, was Prince William of Orange.

The bride had been one of the composer’s keyboard pupils — an apt affirmation, in an American Bach Soloists Academy showcase for rising young artists, that having the right teacher at the right time can really pay off. Billed by ABS as a North American premiere, Parnasso opened a two-night concert-version run on Thursday, August 11 at the San Francisco Conservatory of Music.

Handel laid it on thick in this abundant, tonally diverse, intermittently transporting and uneven three-act serenata. Set on Mount Parnassus, the piece is a kind of greatest hits of Greek mythology variety show that features musical accounts of Apollo and Daphne, Orpheus and Eurydice, the war-god Mars in his thundering mode, assorted muses and a lengthy bacchanal in praise of wine, dance and song. All of it is thematically if somewhat woodenly yoked to the marital occasion at hand.

It’s probably just as well that artistic director and conductor Jeffrey Thomas elected to leave this scattered dramaturgy to the listeners’ imaginations. Absent an immersive spectacle — and perhaps some of that “sacred liquor” celebrated at the end of Part One — the piece seemed less than intrinsically stageworthy. The six women soloists, all in elegant and colorful floor-length gowns, commanded the audience’s visual attention.

Thanks to some admirable work by various featured singers, a stellar contribution by the American Bach Choir and Thomas’ steady command of the vocal and musical forces, Parnasso came off as a worthy endeavor. While the 2-hour and 40-minute work might contain more Handelian packing material and less of the meltingly gorgeous passages that shine like molten silver in almost any of the composer’s vocal-and-orchestral works, none of that mattered when the second of three parts got underway.

After a brief mordant mood setter by the orchestra, four of the six female soloists left their distinctive marks on the same, downward-drifting melody. Contralto Robin Bier’s mysterious dark hue and sauntering presence stood out in particular. Then came one of the chorus’ stately contributions, the part-singing at once distinct and handsomely fused as it was all night.  Moments later, they turned rambunctious on the glories of a hunter’s life.

Mezzo Katie Clark rode the hectoring strings of Calliope’s aria about the furies to dizzying effect. Soprano Ashley Valentine was graceful if a shade too restrained in Orfeo’s wrenching aria about finding serenity only in the shadows. Even as it closed with a routine recitative and chorus, this middle section staked out the musical high ground in Parnasso.

The anchor from start to finish of the evening was mezzo-soprano Mindy Ella Chu, who used her serene presence, suave phrasing, liquid ornaments and a pleasantly earthy timbre to give the dominant role of Apollo a gratifying sheen. If a smattering of her many arias and recitatives felt slightly undercharged, this was a calmly heroic performance all-around.

There were plenty of other plaudits to hand around. Soprano Suzanne Karpov dug beneath a bell-like purity of tone to find the anguish in Clio’s lament (“Man was born only to suffer”), set to some of the most urgent and heart-tearing orchestral music. Mezzo Emily Skilling made the most of her limited opportunities, unfurling an arresting fibrous tone near the end of Part Three.   Bass Christopher Besch, the only male soloist in a solo consort that favored the mezzo and contralto female voice, swallowed his lines early on, but recovered and projected nicely in a second aria.

The orchestra played, overall, with sensitivity and tact. The woodwinds, with the demure flutes showcased several times, had a better evening than the erratic horns and sometimes wayward strings. Thomas made a point, at both the intermission and final curtain calls, of singling out the hard-working continuo players. Along with the choir, they were the bedrocks beneath this sometimes entrancing, sometimes static mountain of Greek fancy and wedding-night good wishes.