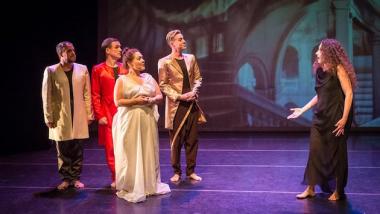 With costumes ranging from tacky Vegas glitz to prim prom dresses, a Cirque du Soleil-style aerial dancer, dynamic big projections and a slangy “Dude” or “She’s nuts” popping up in the supertitles, Ars Minerva’s production of Pietro Andrea Ziani’s 1665 opera La Circe seemed about as far from historical re-creation as it could be.

In fact, this three-year-old troupe had a gamely ambitious go at capturing the antic, anything-goes spirit of 17th century Venetian opera in a two-night run at San Francisco’s ODC theater. A small band anchored by a harpsichord (Derek Tam) and theorbo (Adam Cockerham) supplied a period-specific musical frame for all the swirl of modern goings on.

In the Cristoforo Ivanovich libretto, this treatment of characters best known from Homer’s Odyssey freewheels from romantic angst to ridiculous mischief, with assorted magic potions and spells, plenty of eavesdropping, and a spurned woman in male disguise thrown in. Lovers are betrayed, separated by shipwreck, reunited, rejected, ravished, and bewitched.

A pair of heavy drinkers turn up as pigs. A chastely perky Scylla (charmingly played and sung by soprano Aurélie Veruni) gets nothing but grief for her girlish demurrals. The title character (mezzo-soprano Céline Ricci, who is also Ars Minerva’s artistic director) spends the evening in a steamy, revenge-riddled funk about her love-toy Ulysses having fled the island and her amorous clutches.

Structurally the opera is something of a muddle. A first act full of lyrical arias gives way to fleeter, recitative-heavy second and third acts, with plenty of exposition and plot points. The audience had to keep their eyes on the subtitles to stay current with all the developments. Additional music by Biagio Marini and Giovanni Legrenzi was interpolated, though it’s doubtful there were many Ziani purists in the house to object. (Indeed, according to program annotator Paul V. Miller, there’s even some doubt that Ziani composed the work at all.) An oddly abrupt ending brought this 2 1/2-hour adventure to a close.

There was plenty to delight the eye and ear, nothing more so from the musical side than a sublimely murmurous love duet for the princess Andromaca and her husband, Pyrrhus, she thought she had lost at sea. Mezzo Kindra Scharich, who sang sweetly and tenderly throughout, paired gorgeously with countertenor Ryan Belongie, their vocal lines seductively imitative, offset and intertwined. Moments like this — and there were others — justified some of the more generic Italian Baroque composition the score contains.

A number of witty and wondrous touches enriched a production undersold as “semistaged,” with Ricci at the helm. Projection designer Patrícia Nardi came up with some uncannily human pigs to underscore the scene in which a careening, curly-tailed Jonathan Smucker and Igor Vieira got their comeuppance as they discussed the “nose” and vintage of their wine. An addled Glauco (tenor Kyle Stegall) had a haunting dialogue with a talking fountain (voiced offtstage by baritone Vieira).

For all its enlivening variety and lyrical freshets, La Circe had a tendency to meander and lose its way. High marks to aerialist and choreographer Katherine Hutchinson for the two muscular and languorous solos she performed on hanging straps. But they did little more than draw undue attention for covering several orchestral passages.

Ricci, who may have stretched herself too far by directing and playing the title role, was not entirely successful in either capacity. Some of the stage business was fussy and overly literal, with costume overkill (like Stegall’s glittered Elvis look and mannered acting) contributing to the confusion. Ricci’s own dour black costume seemed unduly grim for such a gifted and ostensibly charismatic sorceress. More problematic was her singing, which had a siren-like impact but lacked the modulations of feeling and temperament Circe undergoes. Mezzo Jasmine Johnson brought a raw, affronted timbre to the role of Aegele, the abandoned lover in disguise and in pursuit of her offender. But her approach and phrasing came off as slackly vernacular and out of sync with the other singers.

With four string players on hand – three of them sparingly used – conductor and keyboardist Tam led the way in a limber and steady reading of the score, a few shrill and imbalanced bits notwithstanding. Some of the loveliest passages featured the excellent theorbo player Cockerham in intimate conversation with a singer.

How fitting, then, that the principals found shelter from time to time by ducking in among the onstage band. Veruni showed Scylla’s appreciation by crowning them all with flower garlands. Belongie’s Pyrrhus was so at ease there that he cozied up to the back of harpsichordist Tam’s chair at one point and fell sound asleep.