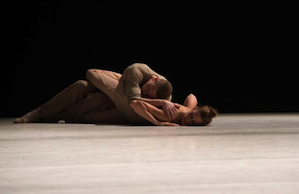 We are underwater with Aszure Barton, but don’t hold your breath. We’ll be down here for 70 minutes, watching Awáa, the word for “mother” in the Haida Gwaii language of northwest Canada native people. Created in 2012 at the Banff Arts Center, it’s Barton’s 2012 creation for seven gifted dancers — six men, one woman, her co-collaborators.

Barton, a Canadian who said she was inspired by a dream that she was sitting underwater in a rocking chair, draws and explores opposites from that environment, that element: masculine and feminine, sharp, and curved. Water suggests “the womb, motherhood and sense of time slowing down,” she said. Luckily, Awáa is so various and mercurial, its dancers so accomplished, that time rarely slows down.

The show, presented here by San Francisco Performances, begins before the lights dim, with black and white film of the dancers on the front curtain making fish faces (and so can you, dear reader; just squeeze your mouth together and pop it open and shut) to the sound of bubbles. If this seems rather unseemly, that’s one of the things I like about Barton. She’s not afraid to vary the tone of her undertaking. Usually it leads to something refreshing, but if it doesn’t work, she’ll just move on. So she’ll show the poetry of a body moving through water, but also the disconcerting vagaries — that random current that makes a foot rise and curl, dislocates a torso, tips the dancers (and us) off balance. There’s remarkable poetry in eccentric movement. Or a couple will nuzzle each other in unconventional regions (for the stage, anyway), lending their intimacy a certain uneasiness. Or one of a trio of dancers, having ended a stunning African-style number — it feels as if they’ve emerged on a beach — yells something Revelations-ish (Barton also choreographed a new piece for the Alvin Ailey company, coming to Zellerbach this spring) like “take me to the river” as the group exits. They’re the show’s only spoken words.

The music is equally strange, created by two composers, sax-and-soundman Curtis MacDonald and Lev Zhurbin, a violinist and percussionist . Some of it sounds like a wonderfully schmaltzy 1950s romance movie, some of it slops over into cheese, and some of it includes the blip and the bloop of tiny and major bubbles. The bubbles are also expressed as balloons, giant to small, carried by the dancers, who stand behind them or under them, or duck walk away from them. Visually, their introduction is the prettiest part of the show, sort of Asian minimalist, with a bubble that’s red and as big as the sun, and a dancer in shadow before it.

The puzzle is why the rest of the show isn’t prettier. The set is spare, with the exception of more black and white projections toward the end that were difficult to see; one was a woman rising upward through the sea, which would have been gorgeous if the lighting worked. The final moments have the woman dancer, Lara Barclay, in a rocking chair; if you hadn’t seen the publicity material, you wouldn’t understand what she was doing there. And never have there been so many costume changes into so many drab outfits – shorts, slacks, long dresses, t-shirts, all colors washed out except (of course) aqua.

Throughout are passages about what it means to mother, to nurture partner and offspring, and, physically, to do all that toting. Barclay, a tall and stunning dancer of flesh and steel, is mother sometimes to her lover, who morphs into an unsteady toddler, and sometimes to the other manchildren. She becomes a mom of two, carrying one dancer in her arms while leading the other around by a hand. How do full-size, muscular men make themselves so infantile and, most importantly, light? How does she make herself so strong? Barton has shared one of those ordinary human miracles here, of being a sensuous woman and being a caregiver moments later. It’s harder to do than to say.

And it’s hard to say enough about the other six dancers, namely Jonathan Emanuell Alsberry, Tobin Del Cuore, Nicholas Korkos, Thomas House, Davon Rainey and William Briscoe. They’re exemplars of what the body is capable of doing, how it can shift on a dime, and how much energy all that capability and shape-shifting demands. The men, singly and in groups, look muscled, manly, and ripply, and then the muscles displace, the ripples move faster, the muscles seem to liquefy. You watch the body turn pliant, before regaining its power just as swiftly.

And then, just when they look most dancey and stunning, they become Piscean, finny (sometimes funny) subjects of the sea. They coexist with it and in it. Nobody fights; nobody drowns. Awaa is made of hundreds of moving parts, thousands of ideas. With Barton’s imagination, the pieces of the puzzle glide and float together, forming a fluid ecosystem that feels as if it’s still growing and changing as the curtain falls.