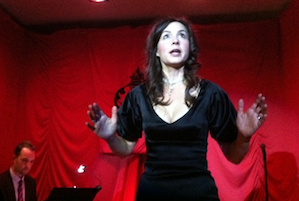 On Saturday evening I found myself in lower Nob Hill, watching opera at a bar. No, I wasn’t watching a scene from a TV movie, but rather real singers performing live. The concert was part of Classical Revolution’s Bay Area Chamber Music Festival, which features chamber music concerts every day for the month of September.

The musicians belong to the San Francisco chapter of Opera on Tap, a national organization whose mission it is to bring opera to the people and strip away the affected atmosphere that many new opera fans experience in an opera house. Almost every month, San Francisco opera fans can find Opera on Tap at Café Royale at the corner of Post and Leavenworth. If you are looking for an alternative to the usual Saturday night bar crowd, this is your ticket to better music and better company. It’s an operatic complement to Classical Revolution’s mission.

The bar was already crowded with opera patrons when I arrived, 10 minutes before showtime. Not finding a chair, I ended up leaning up against the wall with a cocktail in hand. Luckily, one friendly audience member waved me over to a wide ledge that lined a bank of windows and I was able to squeeze in.

The atmosphere, not surprisingly, was nothing like that of a more formal concert venue. Patrons conducted whispered conversations and huddled around tables, some listening intently, while others treated the singers as background music. During the breaks, I found myself talking animatedly with my fellow audience members, something I have never done at an opera house. Everyone I spoke with appreciated the opportunity to see opera in a casual setting and no one seemed to mind the chinking of the ice during the performances as the bartenders mixed drinks.

Along with the casual feel of the concert, another highlight of the night was MC and soprano Indre Viskontas, who brought further levity and wit to the evening. She described each aria, making snarky jokes about the frequently ridiculous situations in which opera characters find themselves (who really can’t recognize their partner simply because he/she dons a mustache?). This dry humor was then extended to the supertitles (a pleasant surprise in and of themselves), which got raucous laughs from the audience.

There were a few singers who rose above the rest (in particular, Julia Mulholland in a clear and resonant rendition of “Caro nome,” from Verdi’s Rigoletto, and Indre Viskontas with an achingly haunting “Adieu, notre petite table,” from Massenet’s Manon), much of the singing fell flat. This was partly the fault of the acoustics and partly the singers. On the other hand, while I was not bowled over by anyone, neither was I seriously disappointed, considering the venue.

One further problem with the evening was the unfortunate electric piano. The pianist tried desperately throughout the evening to create colors that are simply non-existent on an electric keyboard of that quality. As Opera on Tap gains traction in the Bay Area, they should seriously consider a higher quality keyboard, because this one served neither the pianist nor the singers.

Despite these minor issues, Opera on Tap put on a good show. It is wonderful to know that I have somewhere to take my friends who have shown an interest in opera but are not quite ready to make the plunge into the hallowed (and expensive) halls of the opera house. And heck, with a few good cocktails, Opera on Tap could turn even the staunchest philistine into a Puccini fanatic.