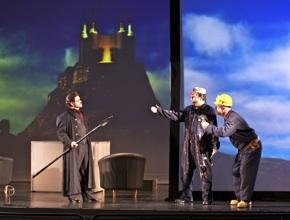 Once upon a time, six long years ago, there was a little opera company in Berkeley tackling a huge project, called the Legend of the Ring, making waves far and wide. And now, on Saturday, here was a little company again, taking up the same challenge: David Seaman’s condensation of Richard Wagner’s four-opera, 15-hour Der Ring des Nibelungen cycle into a four-hour evening, including a single intermission.

The first part combines Das Rheingold and Die Walküre, and the second consists of Siegfried and Götterdämmerung.

A point of perspective: Legend’s entire running time is shorter than Ring intermissions alone in the Wagner temple of Bayreuth, Germany, where the first of the 2010 cycles just concluded on Sunday — a total of six hours.

Legend dispenses with a 100-plus-piece orchestra, about the same number of soloists and chorus, and huge sets, settling instead for a cast of eight (eight!) in multiple roles, no chorus, an orchestra of 16, and projected sets. A challenge, indeed.

In 2004, it was the Berkeley Opera in the Julia Morgan Theatre, packing ’em in and scoring critical success. This time, it’s the freshly renamed Berkeley West Edge Opera in its new venue, the El Cerrito Performing Arts Theater, once again filling a hall (twice the size of the Julia Morgan), and scoring even bigger. And ... not.

Seaman’s reduction of the orchestra is radical. In the string sections alone, Wagner’s 32 violins disappear, as Legend has none; instead of 12 violas, there are three (Michi Aceret is the first violist and thus the concertmaster in El Cerrito), while two cellos do the work of 12, and two basses substitute for the original eight.

Strings on Saturday did fine work, though there weren’t enough of them to cover up problems in the brass to the same extent that the original, gargantuan Wagner orchestra can.

Perhaps there were not enough rehearsals or it was merely a “bad night,” so upcoming performances — on Aug. 4, 6, and 8 — may still have the best of both worlds, on the stage and in the pit.

The cast is gloriously starry, for a small company. Wotan is sung by Richard Paul Fink, a regular in some of the world’s big opera houses. His Saturday performance combined a great voice with musical intelligence, along with praiseworthy restraint to avoid oversinging in a relatively small theater. The Seaman reduction takes most of the depth away from the character, yet Fink still gives a solid portrayal.

Fink also appears as Gunter, another remarkable vocal performance, but here he is handicapped by the director’s whim of presenting the character as a shuffling, prissy caricature.

Jay Hunter Morris, as Siegmund, Siegfried, and Froh, gives sterling performances, his bright, clear heldentenor not only holding up well, but actually peaking as time went on.

Among a number of roles they sing, Bojan Knezovic scores best as Alberich, as does Dean Peterson as Hagen. The two are also paired well as the giants Fasolt and Fafner.

Music Director Jonathan Khuner, who has had an important role in many “real” Ring productions in both San Francisco and New York, exhibits an impressive mastery of the score, which is a smooth aggregation of Wagner’s operas, making the omission of lengthy portions and of big numbers (bye-bye, “Ride of the Valkyries”!) almost imperceptible.

Artistic Director Mark Streshinsky, whose career has skyrocketed since his early days with Berkeley Opera, had a fascinating stage production back then, and he has improved on it this time.

Gods, dragons, giants, dwarves, heroes, and villains — all perform their cosmic drama on the small-box center stage between two large screens. The set consists of two chairs and a desklike platform; that’s it. And yet it works.

The improvement since the last production: Instead of Loge’s using a trash can to clean up the stage during the finale, this one has the proper, world-ending fireworks.

Insisting on a previous misstep, however, Streshinsky still has the Forest Bird use a cell phone to report (silently, but in a grotesquely animated fashion) Siegfried’s slaying of the dragon, and then sing her lines into the phone. Mercifully short of EuroTrash, it’s just plain silly.

Jeremy Knight’s projections are terrific: more modest, abstract, and at a fraction of the cost of and yet quite as effective as those in the San Francisco Opera’s current production. Lucas Krech’s lighting design, though, needs fine-tuning, for the stripes and blotches of colors on faces and bodies are confusing.

Again, there are only three more chances to see and hear this economic, vocally opulent edition of the Ring.