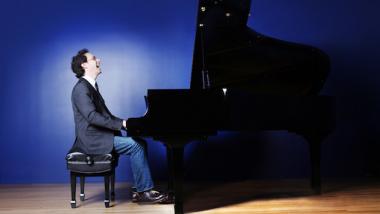 No words were spoken and no songs were sung, but Berkeley Symphony’s Reverence concert was all about breathing.

Or, maybe “moving air” is a more accurate term for describing the delivery and essence of the symphony’s U.S. premiere of James MacMillan’s Symphony No. 4 and the performance of Beethoven’s Piano Concerto No. 4 on Thursday night at Zellerbach Hall. Certainly the first indication that the evening would offer breathtaking moments were the gasps heard when guest conductor Elim Chan entered. Deceptively slight of build, the first female winner (in 2014) of the Donatella Flick LSO Conducting Competition and soon-to-be (in 2017) Chief Conductor of NorrlandsOperan likely caused some people to wonder, “This mere child is about to lead an orchestra?”

But looks are deceiving and within moments of taking the podium, Chan’s arms flung themselves from her tiny torso like gigantic flags whipped by gale force winds. With her baton slashing like a thunderbolt and alternately bending knees that took on an oceanic quality as she shifted her weight and attention from the violins to the horns to the percussionists to the violas, it was as if the universe of natural forces — water, earth, wind, light and sound — emanated from her body.

Leading the orchestra through the wilderness created by MacMillan’s one-movement symphony, Chan built excitement, drawing boldness and contrasting dissolution with dexterity. It was a pleasure to hear a piece that featured the symphony’s fine viola players in solo lines that draped themselves across muted trumpets or pushed against the piano passages that were played with exceptional authority by Miles Graber.

At times, the forceful layering of strings, winds, xylophone, and piano thrust itself like a mighty ship emerging unexpectedly from the fog and threatened collisions — only to fall away, leaving behind shimmering bell-like notes played by principal harpist Wendy Tamis and a cascade of strings that ended in long, sustained notes. Sweet peace reigned momentarily, disturbed intermittently by brief, jazzy flourishes on piano and mini-cloudburst intrusions from the violins that never amounted to a real downpour. With the trumpets gaining momentum, the work continually plowed forward from each cessation as if geared to drive itself off a cliff.

Unfortunately, two-thirds of the way through, the “stretched and developed” themes (as described in program notes) stalled and meandered aimlessly, enervating the earlier sections. The reentry of a steady kettledrum signaled a reprise of the elegant, glowing violas and vigorous skirmishes by the cellos that came in a swift, dynamic finish. An internal trim might have led to a work with more memorable, consistent impact.

If the MacMillan was uneven, guest pianist Shai Wosner and the orchestra’s playing of Beethoven’s fourth concerto was not. Performing with equal parts tenderness and forcefulness, Wosner literally leaned towards the orchestra as he listened. It was as if he might fall into their laps to better absorb their instruments’ sound waves, then allow the interplay to ripple through his body and onto the keys. Displaying technique that was nearly frightening, or at least breathtaking in the easy, casual manner with which he lifted his hands at the last moment before each critical solo passage or cadenza, Wosner addressed the work’s many colors. He played with poignant delicacy (especially in the andante movement), jubilant buoyancy, subdued seriousness, vigor, and playfulness.

The symphony matched his tone, capturing the muted heroism in the first movement and the spirited brilliance throughout. Beethoven adorns the concerto (the last of his concertos in which he played as a soloist before deafness robbed him of his performing career) with thematic material that is like the perfect houseguest. His themes rarely overstay their welcome and when they return, they bring surprises and enough creativity, brightness, enlightenment, and joy that you are left eager for another visit. Berkeley Symphony and Wosner brought that aspect to the forefront more than anything else. Their shared pleasure stretched into the audience, causing people to breathe as one person, from my nonscientific observation of the people seated nearby.

Wosner’s encore, the second movement of Schubert's Piano Sonata in A Major D664, finished the evening with grace. In the brief pause before applause began, a woman’s long, languid sigh was audible. She wasn’t alone. Breath — moving air — swept away tension and left behind only loveliness.

Correction: The first published version of this story misidentied Wosner's encore as the first movement of Schubert's Piano Sonata in A Major D664. It was the second movement.