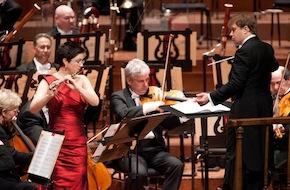 As announced, the Boston Symphony Orchestra’s visit as part of the American Orchestras series marked the return of the great orchestra after a 15-year absence, a chance to assess its state after five years under James Levine, and an opportunity to hear two recent works by important American composers. With Levine’s tenure at the BSO sadly cut short by his ongoing health problems, the Bay Area also got its first look at Ludovic Morlot, the new music director of the Seattle Symphony.

And what a look it was. The orchestra itself is in splendid shape, boasting a string section that plays with remarkable depth of tone and woodwinds that have as distinctive a sound as I’ve ever heard. Never less than excellent, Morlot was sensational in several of the diverse works he led, earning a well-deserved standing ovation at the close of Wednesday’s concert. That program included two of several highlights of the BSO’s visit. Morlot led a ravishing account of Ravel’s Daphnis et Chloé, Suite No. 2, the orchestral sound both full-bodied and luminous at every dynamic level. Both sonically and musically, this was as good as it gets. Principal flutist Elizabeth Rowe played the intricate flute solo with graceful panache; Clint Foreman, second chair, and Elizabeth Ostling, alto flute, also made notable contributions, as did principal oboist John Ferrillo.

The birdsongs of Daphnis’ “Daybreak” section led neatly to the birdsongs of Mahler’s Symphony No. 1, an unexpected aural connection between two very different works. A few bumpy bits in the first movement aside, the performance was superb, easily equaling the considerable best we’ve heard in San Francisco in recent years. Morlot’s magic gave the work propulsion, cohesion, grandeur without bombast, charm without preciousness, emotional power without exaggeration. The lilt and lift of the Ländler, the weight and majesty of the low strings in the minor-key “Frere Jacques” section of the third movement, the blaze of the trumpets throughout, the rich mahogany tone of principal clarinetist William R. Hudgins will all live long in memory.

John Harbison’s Symphony No. 4, composed in 2003 for the Seattle Symphony, opened Wednesday’s program. It’s an engrossing work, full of interesting detail and structural experimentation. Like the Mahler and Ravel, it deploys a very large orchestra, but the effects provided by that orchestra seem more studied and less organic than those in its companions, thought through rather than arising naturally from the melodic and harmonic elements of the work.

The big, jazzy first movement (Fanfare) starts off sounding like a parody of marching band music, with a jagged recurrent theme — but then it fades out strangely at the end, as if losing momentum and energy. The chiming Intermezzo, with its shades-of-Sibelius first theme, similarly drops off at the end, and the bumptious Scherzo finishes quietly too. Perhaps Harbison was explicitly trying to be inconclusive at the end of these movements, but my sense was that his style doesn’t quite allow for simply cutting loose when the musical materials imply a climax. The Threnody, a moody adagio, was closest to a conventional symphonic movement, while the Finale finally accepted its fate and, following a stop-and-go opening, closed with a bang.

Of equal interest was Elliott Carter’s Flute Concerto, a late work completed shortly after the composer’s 99th birthday and heard Tuesday night. About 15 minutes long and for a smallish orchestra that nonetheless includes a colorful percussion section, a harp, and a piano, it’s a lovely and challenging showpiece for the flutist. Its outer sections call for virtuoso playing, which Elizabeth Rowe dispatched with brilliant aplomb and tone of liquid gold; the central section contrasts a lengthy lyrical flute solo with Carter’s characteristic scurrying interjections. Whether the Harbison will enter the standard repertory remains to be seen, but this concerto is unquestionably a splendid addition to the flute repertory.

Tuesday’s concert opened with a fizzy and gorgeously executed reading of Berlioz’ Roman Carnival Overture. Also on the program was Mozart’s Piano Concerto No. 25 in C Major, K. 503, which in the hands of pianist Richard Goode received a genial, tender, and utterly unexciting performance. Morlot and the orchestra provided sympathetic support. The evening concluded with a stormy and powerful account of Bartók’s brutal Suite from The Miraculous Mandarin, with notable contributions from English horn player Robert Sheena and, again, William Hudgins.