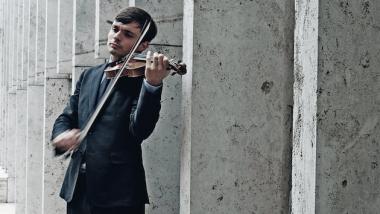 Bouncing Between Baroque and Contemporary at Music in the Vineyards

The upstairs dining room at the Silverado Vineyards in Napa Valley, with its vaulted ceiling and massive fireplace, is suitable for banquets, but last Friday it offered a feast for the ears — an adventurous program that paired four baroque works with three contemporary ones, courtesy of Music in the Vineyards, the amazingly successful music festival run by Michael and Daria Adams.

The opening work was an unaccompanied 1720 Grave for violin, by J.S. Bach. The performer, Francisco Fullana, was a paragon of delicacy as he unveiled the opening notes. His bow seemed not so much to pull the strings as to float on them. The bow was modern, but his grip was the one employed for baroque bows: hand far up the stick, pinky up in the air. Despite that tenuous grasp, he elicited tremendous volume and tone from his instrument, a Guarneri del Gesù.

Performances of the Bach unaccompanied sonatas are ubiquitous, but Fullana offered a refreshing take, with as much emphasis on the quietude as the drama. Sadly, the Grave was the only movement he played, but it was immediately followed by Arches for solo violin by Kevin Puts, performed by Axel Strauss on the other side of the room, well behind the audience. His ferocity contrasted wonderfully with Fullana’s restraint.

Arches is a modern homage to the Bach unaccompanied sonatas, at times nearly indistinguishable from its forebears, at others more like a hoedown. It begins slowly but soon accelerates and then accelerates even more, with bravura sul ponticello (played near the bridge) passages. Strauss proved equal to the technical demands and imparted plenty of his own zing.

A quintet then played an extremely rare Buxtehude sonata for two violins, cello, bass, and harpsichord, circa 1690. The piece was inventive, often daring and always dazzling under the fingers and leadership of Fullana, who played the first violin part to perfection. His playing is quite expressive and relaxedly virtuosic, with impeccable bowing. His colleagues matched him stroke for stroke, making a case for the seldom-heard glories of the baroque before Bach.

The main work of the evening, with the composer in attendance, was Aaron Jay Kernis’s Musica Celestis for string quartet, performed by the Chiara String Quartet. One of the most celebrated pieces of contemporary chamber music, Musica Celestis amazes with the intensity of its vision, the deceptive simplicity of its materials, and its manifest spirituality. The Chiara never wavered in its well-honed, often fervent performance. Each player soared to the farthest reaches of the fingerboard with full tone and knife-edge intonation. The final section, begun after a long rest, was the most ethereal, with abundant harmonics, long sustains, and a wonderful viola solo.

Kernis’s sumptuous quartet called for a full-bodied digestif, in this case a 1700 Albinoni Sonata à cinque. The sonata is essentially a standard-issue Albinoni concerto for two oboes transposed for two violins. Fullana led the ensemble once again, playing energetically with infectious clarity and drive.

The second movement of Jefferson Friedman’s second string quartet suffered in comparison to Kernis’ work, which it resembled in many ways. Like Musica Celestis, the Friedman was slow moving and tended to settle into one harmonic center. But the drift seemed aimless, with none of the magnificent architecture of the Kernis. From a programming standpoint, it would have been better to offer a work with more contrast.

All was forgiven in the bubbly finale, the summer concerto of Vivaldi’s Le quattro stagioni. Axel Strauss returned to lead the combined ensembles in a thunderous rendition of this much-played concerto. He stood out from the crowded field of Vivaldi interpreters by taking dynamics and tempi to extremes. The storm in the first movement was truly a storm, with the instruments swaying in the wind at top volume. Likewise the attack of the hornets in the third.

In the calmer atmosphere of the second movement, Strauss played almost metrically. He articulated the flowing solos as if he were playing an unaccompanied Bach sonata, giving Vivaldi’s melodic line new shape and impact.

Given the success of the new-old framework of this concert, we can only hope that Music in the Vineyards will program more contemporary works in future seasons. There’s nothing wrong with old wine, but new grapes keep growing every year.

Music in the Vineyards Owes Success to Its Faithful Audience

Co-founder, Michael Adams, says when it comes to programming a festival, you have to know what your audience likes.