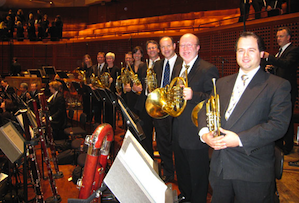 San Francisco Symphony suffered a tremendous loss this week, with the death Thursday morning of longtime Principal Oboe William Bennett, several days after he collapsed on stage while performing the Strauss Oboe Concerto. Fittingly, the current program of works by Mozart and Bruckner is dedicated to Bennett's memory, and the program insert about him makes touchingly clear the affection and deep respect in which Bennett was held by his colleagues.

Before the concert started, Music Director Michael Tilson Thomas said a few words in fond remembrance of Bennett, contrasting the oboist’s youth when he joined the Symphony at 23 with the great age of much of the music the orchestra performs. Before the Bruckner, he had the audience stand for a moment of silence in memory of Bennett.

It was an oddly unbalanced program, with about 15 minutes of music from Mozart’s unfinished opera Zaide, followed after the intermission by Bruckner’s colossal Symphony No. 7. Soprano Nadine Sierra, a former San Francisco Opera Adler Fellow and a graduate of the Merola Opera Program, made her SFS debut in two arias from Zaide, “Ruhe sanft, mein holdes Leben” (Rest gently, my dear life) and “Tiger! Wetze nur die Klauen” (Tiger! Sharpen your claws).

“Tiger!,” however, is a rage aria that came off more as a mild annoyance aria than a fit of rage. Sierra’s soft-grained voice lacks the heft and the edge to adequately project a blazing temper. She could have made up for this with accents, sharp consonants, and precise diction, but without the printed text, it would have been nearly impossible to understand what she was singing. And it didn’t help that she consistently gave “Tiger” its English rather than German pronunciation, Tie-ger for Tee-ger.

Still, Sierra has charm to burn, and just now she’s more of a Nozze Susanna than an Idomeneo Elettra. The program could have been chosen to better suit her current vocal character. MTT led the orchestra with unsurprising point and grace, given that he recently concluded conducting longer excerpts from Zaide in Miami with his New World Symphony.

As for the Bruckner, all the Mahler that MTT has conducted in the last decade has paid off handsomely in his ability to encompass with ease and insight the largest and most structurally complex works in the repertoire. Bruckner’s Seventh received a shapely, beautifully proportioned, and often searing performance, its heroic passages balanced on a knife edge with the more naive. The outer movements, especially, unfolded with long-breathed grandeur. Tilson Thomas launched the scherzo with savage intensity, but didn’t quite maintain that extra fierceness, the initial tempo slackening off after the opening.

The woodwinds, who normally play with astonishingly unified precision, had an off night, with a surprising number of messy entries and a sense that some solos were not quite in synch with MTT and the entirety of the orchestra. One exception would certainly be Carey Bell’s gorgeously played clarinet solo near the start of the last movement. I’m inclined to chalk the coordination issues up to the understandable musical and emotional effects of losing Bennett, an anchor of the winds in more ways than one. Acting associate principal oboe Chris Gaudi and principal English horn Russ deLuna filled the oboe chairs more than ably. Still, in the wake of such a sudden and devastating loss, it is likely to take some time to adjust to Bennett’s absence.