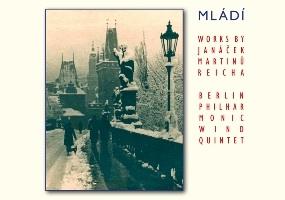 Bracing Winds From the Czechs

The wind quintet repertory gets little exposure in the world of chamber music, where string quartets and piano-plus-strings are the ensembles most likely to be programmed — and it’s not as though dozens of first-rate wind quintets evangelize for that repertory.

Yet at least one does: the Berlin Philharmonic Wind Quintet, formed in 1988 by players from that august orchestra. Based on this CD (BIS-CD-1802), the latest of a dozen on the BIS label, they’re the Juilliard, the Emerson, the Arditti of wind quintets — fire-breathing virtuosos who toss off difficult music with tremendous panache and flair.

Mládí contains works by three great Czech composers, of whom Anton Reicha is surely the least-known to modern audiences. Most familiar to today’s music historians as an important teacher at the Paris Conservatory in the first third of the 19th century, he was nonetheless a fine composer. Working in Paris, he had some of the greatest wind players of the time at his disposal, and he composed about two dozen wind quintets as a result.

Of the two Reicha works on the CD, the Quintet in E-flat Major, Op. 22, No. 2 (1811), uses the standard instrumentation of flute, oboe, clarinet, bassoon, and French horn, while in Three Pieces (1817, 1819) he substitutes the English horn for the oboe. Both works are full of clever and charming writing; lovely tunes abound, as do many challenging and difficult passages for the players. The compositions also show the considerable range of Reicha’s technical abilities; one movement even contains a long and finely worked-out fugue.

Bohuslav Martinů wrote his Sextet for Piano and Winds in 1929 during a long sojourn in Paris. The composer had clearly absorbed a great deal from the musical melting pot that was that capital between the wars, from Stravinskian neoclassicism to “le jazz hot.” The Sextet, in which the winds are flute, oboe, clarinet, and a pair of bassoons, has the kind of brisk cheekiness and fluidity you find in much of the composer’s work — additional evidence of why he should be played more frequently.

March of the Bluebirds, for piccolo and piano, recalls the poor scholarship boys, dressed in blue uniforms, of the school where Leoš Janáček studied as a boy.

In the sextet Mládí (Youth), Janáček adds a bass clarinet to the standard quintet, giving the sextet a darker hue; he also brings the piccolo in when he quotes his own March of the Bluebirds. Written in the composer’s late style, full of minimalist-like repetitions, it’s also far and away the most emotionally dark-toned work on the set. The players project the melancholy and also the closing exaltation with the greatest of ease.