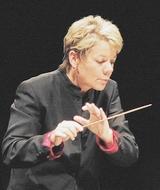 Brilliance in the Air

Lisa Hirsch on August 14, 2007
Great performances are nearly a given at the Cabrillo Festival of Contemporary Music, whether or not you find yourself loving the work being played, thanks to Music Director Marin Alsop and her fabulous orchestra. Happily, the program for Saturday's concert consisted of three first-class pieces that should all earn a place in the standard repertory. The concert led off with Rusty Air in Carolina, by 30-year-old Mason Bates, a student of John Corigliano and others who is currently studying at the Center for New Music and Audio Technologies at UC Berkeley. Before the performance, Bates told the audience that "rusty air" refers to the texture of the air in the South, heavy with humidity and alive with the rattle and buzz of cicadas and katydids. Those sounds, recorded and electronically transformed, underlie much of Rusty Air in Carolina, whose three movements give us the feeling of a Southern night. The insect sounds — which Bates referred to as an "insectoid techno-beat," to much audience laughter — add plenty of atmosphere, but the composer also treats the sounds as percussion, and integral to the music, especially in the jazzy middle movement. The three movements segue smoothly into each other, without a break, much as dusk turns to darkness and darkness to dawn. The mood changes, too, from the mysterious trills and swells of the first movement to the driving blues of the second, then to the long, arching sunrise melody of the third, in which, among other things, you can hear the birds awakening with the dawn. Bates handles the big, colorful orchestra imaginatively, layering the instruments from top to bottom without losing transparency, even in the problematic acoustics of the Santa Cruz Civic Auditorium. Particularly striking were the great washes of sound in the first movement, built over a base of horns, trombones, and tuba, and the bird noises in the third. As strong as the evocation of the South is, Rusty Air in Carolina would work as well if it were called Three Movements for Orchestra and Electronica.

Thomas Adès wasn't in attendance at the Cabrillo Festival, so Alsop stepped up to introduce the composer's violin concerto, Concentric Paths, which was receiving its first West Coast performance. She sounded a bit rueful over the complexity of the piece and the difficulties of rehearsing it, describing Concentric Paths as consisting of "puzzles within puzzles within puzzles, or maybe one of those Russian dolls, or maybe one of those Escher drawings where you follow a staircase and, uh-oh — what happened?" Alsop and soloist Yumi Hwang Williams, concertmaster of the Cabrillo orchestra, gave the audience a helping hand in deciphering the puzzles, playing some well-chosen excerpts to demonstrate the paths through which the piece moves. The first movement of the concerto, "Rings," runs on nervous energy generated by a repeated sixteenth-note passage that appears first in the solo violin before working its way into the orchestra. Through much of the movement, the violin plays in its highest register, often in harmonics, giving the movement a desperate air. The second movement, "Paths," brings to mind Brahms and Bach not only because it's a passacaglia, but also because of the striking way that Adès uses silences to punctuate intensity in the repeating ground pattern, contrasting short solo violin phrases with violent orchestral outbursts. The third movement, "Rounds," takes the passacaglia theme and transforms it into something sinister and haunting, played over throbbing drums. A horn countermelody follows, and is succeeded by the return of a piccolo and violin duet initially heard in the second movement. However complicated Concentric Paths may be, the complexity is like that of a work by Brahms or Bach, with tightly worked-out and frequently audible formal structures, most strikingly in the second-movement passacaglia. And, as in so much of Brahms, the formal rigor doesn't keep Concentric Paths from being both beautiful and deeply emotional. As with other works by Adès, Concentric Paths is a masterpiece — richly imaginative, skillfully scored, and impossible to describe adequately on one hearing.

The entire second half of the concert was devoted to Philip Glass' Symphony No. 8, which, like Concentric Paths, was composed in 2005 and received its West Coast premiere at Cabrillo. Most likely, plenty of people are still making bad jokes about Glass and his music — but as my companion for the evening remarked, this only means they haven't listened to anything he's done in the last 25 or 30 years. Symphony No. 8 is about as far from the Glass stereotype as you can get: a big, three-movement work of great complexity and variety. The first movement, some 20 minutes long, contains no fewer than eight themes, which Glass combines, contrasts, repeats with different harmony or orchestration, and plays in counterpoint to one another. He builds massive structures from his materials, and not just in the first movement. As in the Adès, the second movement is a passacaglia, though instead of the truncated phrases that Adès uses for his theme, Glass' theme is 16 measures long. It's first heard as part of a brass chorale, then running winds dance over the ground. A plateau of sorts arrives where the violins and trumpet play together, followed by a flute and harp, then a magnificent solo on high trumpet or cornet. The movement dies down to the quiet thrumming of basses and harp, together with flutes above. The third movement, the shortest of the three, is long-breathed and almost languid. Like the Adès and Bates, the Glass symphony received a bravura performance, and after all three I had to restrain myself from shouting, "Encore!"