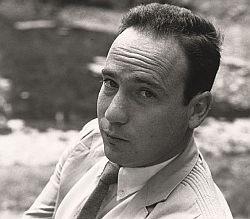 To celebrate the newly renovated, reopened, and renamed Jeannik Méquet Littlefield Concert Hall at Mills College, various ensembles and musicians gathered on Saturday evening to perform the music of one of the college’s many musical luminaries: Darius Milhaud, the French composer who took up a post there after fleeing the Germans in 1940.

The evening began with a piece that does not fit the conventional image of Milhaud — that is, the enfant terrible stirring up hedonistic and harmless fun in 1920s Paris. His Cantate pour l’Inauguration du musée de l’homme (1937) is a ponderous setting of texts by Robert Desnos, scored for orchestra, chorus, soloists, and narrator. The 10 movements depict the progression of mankind from its primordial beginnings to a hopeful vision of peace and harmony. Written at a time when Europe was positioning itself for war, the Cantate serves as a sort of dark counterpart to the composer’s more well-known Création du Monde (1923).

The performers, under the baton of Nicole Paiement, rendered this dark vision with enthusiasm. The chorus did not hold back in the score’s many guttural outbursts, treating the barbaric shouts and grunts with the same seriousness as the more conventionally melodic passages. At times the seriousness got the better of itself: Jacinthe Harbec’s histrionic narration almost sounded like parody.

The soloists were slightly mismatched. Soprano Patrice Maginnis’ and mezzo-soprano Wendy Hillhouse’s heavy vibratos clashed with tenor Brian Staufenbiel’s and baritone Robert Stafford’s more straitlaced tone. Still, this did not detract from their individual performances. The third movement features a beautiful unaccompanied passage for tenor on wordless syllables, and in Staufenbiel’s earnestness a listener really could hear the call of the wild.

The next piece provided a sort of transition from the Cantate to the first-half closer. The Cinq Études (1920), for piano and orchestra, use the same primitivist sounds in a more abstract piece. Here the focus shifted to rhythm, with many passages involving contrasting and overlaid rhythms. Many of these were shakily executed. The orchestra was not quite in sync with pianist Robert Schwartz, making the rhythms sound uncoordinated rather than asymmetrical.

The first half ended on a promising note, however, in the Concerto for Percussion (1930). For those new to the concept, a percussion concerto might not seem capable of the virtuosic spectacle that piano or violin concertos often provide. Yet picture a violinist surrounded by five violins, and imagine that he or she has to jump from one to another every four measures. Additionally, imagine that the violinist has six bows to choose from, and that he or she must remember which passages require which bows.

That begins to approximate the experience of watching percussionist William Winant. The rhythms of Milhaud’s concerto are not terribly complex, though they do call for dizzying permutations of instruments. No one could take their eyes off him as he spun from drum to drum, sometimes with his back to the conductor, switching from mallets to sticks in the space of a half-note. And it wasn’t simply his gymnastics that held us in thrall, but his musicality, as well. Never have I seen a tympanum hit so tenderly or a gong struck with such expressivity.

Milhaud’s youthfulness came to the fore in the second half of the program. The first work presented was Le Carnaval d’Aix (1926), a 12-movement suite of dances, humorous episodes, and other musical confections, for piano and orchestra. The movements, some of which last under two minutes, range from the quietly serene to the boisterously jovial, but the unifying mood of the piece is lightheartedness rather than emotional profundity. Having a fuller orchestra seemed to trigger a response in Paiement, who conducted with a lively merriment that elicited more than a few appreciative grins.

The evening was brought to close with Milhaud’s Bœuf sur le Toit (1919), which provided the Brazilian flair that the concert’s title promised. The piece is a rondo built around an infectious dance tune that cannot fail to get one’s foot tapping. The coordination problems from the first half of the program resurfaced here, robbing the rhythms somewhat of their spice, but no one seemed to mind. Like Le Carnaval d’Aix, Le Bœuf was written at a time when composers were rediscovering the entertainment value of music. If the number of people who were whistling Milhaud’s tune while exiting the hall is any indication, I’d say the Mills Music Festival succeeded in that task.