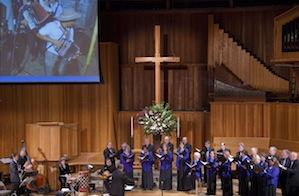 “My desire with Cantare,” said David Morales, Cantare Con Vivo’s founder and music director, “is to use music as a tool for building community. That word implies a whole slew of things: collaborating with other groups, in different styles, entering into those styles and learning about them ... and that increases audiences.”

The whole slew was visible and very audible at the 24-voice chamber choral ensemble’s collaboration with another Oakland-based group, instrumental quartet Quijeremá, in a joint venture called “Arroz Con Leche, The Music of Latin America,” Sunday afternoon at the Lafayette-Orinda Presbyterian Church. The day before, on Cinco de Mayo, the groups played together, for free, outdoors at the Fruitvale BART Transit Plaza in Oakland.

In Lafayette, the audience sat in pews; at first, a head or two bobbed and a foot tapped to the brio of the eponymous number that named the concert — a beloved folksong named, appropriately enough, after a simple confection, both song and sweet being known throughout Latin America: “Arroz con leche,/Me quiero casar ... Con esta, si/con esta, no ... me caso yo” (Rice with milk,/I want to get hitched ... With this one, yes/That one, no ... I’ll be married).

After a while, more bobbing heads and tapping feet joined in, and the ovations grew in volume and length.

Quijeremá, led by Quique Cruz of Chile, alternated instrumental numbers with the chorale’s vocals, sometimes accompanying Cantare, sometimes sitting out as the choir sang a cappella, and sometimes vocalizing themselves. Guitarist Cruz and percussionist-string player Maria Acuña (from Venezuela) sang songs from the Caribbean to the Andes, in any number of rhythms, played on a variety of traditional instruments, while images of two continents flashed by on a big screen above the musicians’ heads. Between numbers, Cruz often commented on the images: pictures of sprawling cities, huts on the beach, towering peaks with glaciers, “the driest deserts in the world.” And faces — an entire spectrum of them, working, celebrating, singing, dancing.

“My singers sing well,” Morales, who is of Mexican heritage, noted, “but there’re challenges. Spanish is not their first language. We like to get the intellect involved, though, to keep an inspiration — and keep it entertaining. Hear a sound, a style. ... Bring in a little more understanding, awareness of history; make it so you want to go home, look at a map, read a book. And music suddenly becomes elevated when you perform it with people who’ve played and sung it all their lives.”

A Wealth of Continent-Spanning Songs

Many sounds in many styles were heard Sunday in the capacious redwood sanctuary. Repertory ranged from the familiar — Bésame, mucho (Kiss me, much!), the international hit of 1940 from Mexico that figured prominently in North American Big Band repertoire, with alto Heather Ogden soloing short, urgent lines with a light touch while the choir carried the body of the lyrics sonorously, leading to a muted trumpet solo by Henry Hung (to nice brushwork on drums by Acuña) — to a samba from Brazil in Portuguese, with whistle, hand, and stick drum accompaniment; a Saya, played by Quijeremá, an Afro-Bolivian celebration of San Benito; from Costa Rica, Un beso y yna flor (A kiss and a flower; lyrics included “Light luggage; long voyage”); Inga Telé, Cruz’ original from an Afro-Peruvian festejo, with Acuña on cajo (box, from when slaves were prohibited from playing drums) — and another Cruz original, Cenizas recanto, reminding the audience of his remarks on the sources of Latin America music: Native American, African, as well as Spanish-European (which includes Arabic influence, Cruz’ guitar sometimes sounding like a lute, an oud).

The song Se equivocó la paloma (The dove was wrong: “She was wrong, flying south for north. She thought wheat was water. ... Asleep on the shore, with you atop a bough!”) was set to a poem of Rafael Alberti, the great Spanish poet, a friend of Garcia Lorca, who left for Buenos Aires when the Spanish Republic fell. (Alberti, at 80, appeared 30 years ago at UC Berkeley, reading his poems with humor and passion.)

On the somber, near-requiem from the Argentina of “The Colonels” and their infamous “disappearances,” Te quiero (I adore you: “Your mouth is yours and mine ... never mistaken ...[it] knows how to cry out, rebel ... I want you in my paradise, that is, my country ...), four soloists, one after another, “testified” in brief quatrains. Bass Paul Kircher distinguished himself with sudden emotion and pointedness to his voice. “I don’t usually sing that way,” he remarked after the concert, with his children around him, “so I tried to sound like a trumpet.” His voice soared with the meaning in it.

“Both audiences went away with the same thing: understanding, pride — and entertainment.”

Early in the concert, Cantare sang the upbeat Cuban number Son de la loma (From the hills), with Acuña scratching away on guiro (a gourd) and the rest of Quijeremá joining in with the choir: “Mama, I want to know where these singers are from, whom I find so gallant. ... Let’s go see them, Yes sir!” At the close, the audience leapt to their feet, some shouting, then gathered around the singers and musicians in the church and in the bright light outside. “I never play at four in the afternoon,” Cruz said, laughing. It was an infectious moment.

Morales spoke of the day before, in Fruitvale for the holiday: “The sounds, the smell of food, a mother dancing with her 4-year-old while Claudio played. ... You could feel it, standing with them, eating ice cream. ... Taking pride that somebody with clear class in music-making had come down for them to listen, move around. ... My singers are from both sides of the [Caldecott] Tunnel. Most of them don’t know that BART station; they have no reason to get off there. The crowd’s mostly Latino; it’s their neighborhood. So I said, ‘Don’t drive; take BART!’”

And he compared the two concerts, one at the Plaza, the other a few miles away, the next day, in the hills: “Both audiences went away with the same thing: understanding, pride — and entertainment. Our audience in Lafayette would’ve come if we’d done an all-Spanish music program, in any case — and look what they got! But my singers probably benefited most. They saw both audiences.”