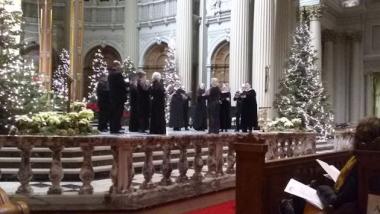 Two calendars, two branches of Christianity converged Saturday night in the splendor of St. Ignatius Church. Huge, garlanded Christmas trees left over from the Gregorian Dec. 25 bracketed the vast sanctuary for a performance of music evoking the Jan. 7 Christmas of the Julian calendar.

Cappella Romana, led by guest conductor Marika Kuzma, presented “Christmas in Ukraine,” an affecting combination of the country’s folk and contemporary music with the hypnotic liturgical sound of the Eastern Orthodox Church.

The concert, the third stop of a tour after Seattle and Portland, was a creation of Kuzma, UC Music Department professor and choral director for 25 years, until her retirement in 2016. Speaking from an intimate knowledge of the country’s culture, Kuzma explained the evening’s program:

In Ukraine, Christmas music-making occurs in churches and concert halls, but rather than being focused on lengthy oratorios or cantatas, its repertoire centers on a cappella miniatures.

Even the categories of Ukrainian carols have diminutive names koliadky and shchedrivky - little carols, little epiphany songs. There are hundreds of them and they are ubiquitous. Whether sung by professional choirs in many vocal parts, by concert soloists, old women in their babushka-scarves together with the church congregation … they are sung with gusto.

A cappella miniatures did make up the program, the ensemble’s 18 singers performing in smoothly changing configurations, at times even singing from the back of the enormous nave. A handful of soloists opened the evening with “Before there was a world,” called the oldest known Ukrainian folksong.

The whole ensemble joined in “Let everything that has breath,” a Galician chant, with soloist Erik Hundtoft. Following a Kievan chant (“God with us”), the folk carol “Today, let’s sing” closed the first set.

Of the program’s three dozen pieces, a standout was the grouping of songs under the title “The Wonder of Mary.” From living composers Roman Hurko and Volodymyr Yakymets to A. Bakkalinsky and Vasyl Barvinsky in the 19th century, to the 18th century Galician chant “All creation rejoices in Thee,” the ensemble and soloists Les Green, Daniel Burnett, Cecily Kiester, and Brenna Wells invoked the music of devotion to the mother of Jesus.

A quirky set, titled “A Peacock and a Window,” consisted of the Lemko winter song “The Peacock Walks” and the Crimean Tatar song “At my window, snow is falling,” with Nadia Tarnawsky (alto and bandura), mezzo Jessica Israels, and Tim Galloway (recorder):

Kuzma’s parents were from Ukraine, “escaping both the Nazis and the Red Army” in 1943, and while she was born in Hartford, Connecticut, her first language was still Ukrainian, “and the first songs I sang at home and in church were in Ukrainian and Church Slavic.”

Her scholarly and music-professional work, varied as it was, returned her to Ukraine, from her dissertation on Dmitry Bortniansky, the “Russian Palestrina,” to talks at conferences at the Kyiv and Moscow Conservatories. Almost none of the music at the concert was published for non-Cyrillic-reading choirs, so Kuzma did the work, thanking the singers for being patient with her handwriting.

While most of her conducting career focused on non-Ukrainian music, ranging from Hildegard of Bingen to John Adams, Kuzma still sings with her hometown Ukrainian church choir every Christmas.

“While I’m an omnivore,” Kuzma says, “I always included some carol or piece in Ukrainian or Russian or Church Slavic with my choirs at Cal. I figured if choirs can sing in Latin, German, French, they can sing in Ukrainian. In college their minds and ears are still flexible enough to manage that.” She led tours of the UC Chamber Chorus to Central Europe, meeting Lesia Dychko, composer of the final piece in the concert. Kuzma has also coached the San Francisco Symphony Chorus, Chanticleer, and other choirs in Slavic diction.