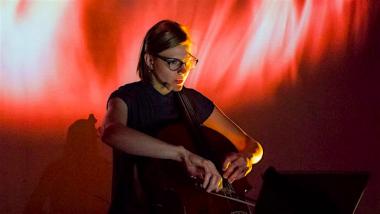 Cellist Amanda Gookin describes her Forward Music Project, produced by National Sawdust, as one that confronts the audience with works about women’s social justice issues. I did not find it confrontational, but challenging.

Each solo piece was commissioned by Gookin and accompanied by beautifully synchronous videos by artist S. Katy Tucker. The mission of the project is to create awareness of the problems facing women and girls who are fighting for their empowerment, and each unique problem and perspective tackled by the composers drew fresh empathy from the audience. In this sense, the program did much of what it set out to do — to inspire empathy and a will to do better for women and girls around the world. But by the end I was exhausted, and not in a cathartic way.

Gookin and her co-creators, Tucker and lighting designer Bruce Steinberg, decided to have each piece run into the next, bringing down the lights immediately and introducing the next work with a recording of the composer speaking. I wish there had been time between each piece: I wanted space to breathe, to let myself cry a little. There was no room for the music to reverberate before the next worthy, important speech began, and I often could not concentrate on the new piece until my mind had settled from the previous.

For instance, Allison Loggins-Hull’s Stolen focuses on the tragedy of modern child brides. The music rolled between lamentation and furious pizzicato strumming. The accompanying video included text of a testimony by a Yemeni girl trying to escape her family who were trying to marry her off. The combination was fruitful, though bitter.

When Gookin finished playing, text flashed up on the screen, stating the source of the text and the fact that the girl was killed not long after she shared her story. There were scattered sounds of sad shock across the audience. Immediately the lights went down and the intro to the next piece began, Angélica Negrón’s Las Desaparecidas, which is about the disappeared women of the sex slave trade. My heart couldn’t keep up.

Nathalie Joachim and Jessica Meyer both honed in on topics that did not focus on danger, and it was very apt that they opened and closed the program. Joachim’s piece Dam Mwen Yo concentrated on the voices of the Haitian women in her life — her mother, aunts, grandmother — and the cultural and sonic appreciation of the presence of women’s voices in the landscape of Haiti. It was a solemn “thank you.” Against a fabric of vocal samples — sung fragments, close breathing sounds, and speech — Gookin was left to weave a smooth line of melody. The feel of the piece was especially fresh in its large changes in rhythmic structure; brightness and seriousness pervaded.

Meyer, in her recorded program note, explained that in writing Swerve she wanted to create a piece that would highlight the way she loved to see Gookin play. Fast and virtuosic, the piece is meant to celebrate how women can juggle the requirements of life, culture, and the self. It is composed with the use of a loop pedal, adding to this ecstatic feeling of anticipation as Gookin layers on more grooves and spikey jams.

Not surprisingly, these two pieces were the ones I was not overwhelmed by and so could focus on their musical value.

The vision for this commissioning project is exactly what needs to be happening in this industry, but because all these pieces were programmed together and without pause, the messages overpowered the musical experience. It wasn’t that the music didn’t live up to the messages: it was difficult to concentrate on the music became I became too caught up in my own thoughts and feelings to fully experience the combination of music, live performance, and video.

Amanda Gookin is on a righteous road, and I hope she can step back and re-think the density of her programming in coming projects. With trees this beautiful, it was a shame that I couldn’t see them for the forest.

In the Loop with Zoë Keating

The acclaimed experimental cellist is a dynamo of creative and social-justice activity.