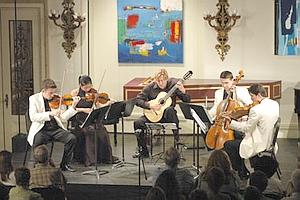 Janos Gereben on July 31, 2007
What do you know: a grand operatic discovery at a chamber-music concert. But consider the source. He was both the "Paganini of the Double Bass" and the conductor of the Cairo premiere of Verdi's Aida. He was a composer who went on stage with the double bass at the intermissions of performances he conducted, to play fantasies on the opera's themes. For me on Sunday, Giovanni Bottesini (1821-1889) stepped from history (and trivia) books into the musical limbo between great composers and the land of Riccardo Drigo and Adolphe Adam — another conductor-composer and a composer-critic not generally held in high esteem today, but favored by my ilk of uncritical melody-hunters. (I do stop at Léon Minkus, however.) Between the great and the not-so-much, I say, because Sunday's superb performance of Bottesini's 1880 Gran duo concertante at [email protected] impressed even more than a Drigo pas de deux or even Giselle (never mind, please, Adam's O Holy Night) — helped perhaps by its novelty. Held in Atherton's Menlo School (as well as St. Mark’s Episcopal and Menlo Park Presbyterian Churches), the festival has brilliant programming and casting by David Finckel and Wu Han. They brought together violinist Erin Keefe and "Yo Yo Ma of the Double Bass" DaXun Zhang, against the "orchestra" of the finest young quartet today, the Manhattan School of Music's barely two-year-old Escher String Quartet (of Adam Barnett-Hart, Wu Jie, Pierre Lapointe, and Andrew Janss). Gran duo opens with a heroic march, which quickly dissolves in a melting operatic/balletic melody with a surprisingly anachronistic (i.e., 20th century) harmonic language, of intriguing and pleasing complexity. Keefe's big-voiced violin played a true duet with the instrument three times its size, and Zhang cajoled astonishing high notes and gentle pianissimos from the double bass. The Escher String Quartet accompanied the duet as if from the pit of an opera house at a performance of a passionate/lyrical work of late verismo — three or four decades before its time. I have heard a few Bottesini works, although nothing with the impact of this, and none of his operas. He has a baker's dozen of them, from the 1856 L'assedio di Firenze to Cedar and La regina del Nepal, both from 1880, the year of the Gran duo. (He also wrote Babele, which is either Italian for Babel or a Yiddish opera.)

Korngold the Way You Don't Usually Hear Him

Opera, peripherally, was also on the program with strains of Die tote Stadt in Erich Wolfgang Korngold's 1930 Suite for Two Violins, Cello, and Piano (Left Hand), a forceful, mighty work performed with raw passion and unparalleled excellence by Keefe, Philip Setzer, Andrés Díaz, and Gary Graffman, who made his festival debut. Graffman, of course, is Mr. Curtis Institute himself, associated with and eventually heading the Philadelphia school over a six-decade span; he has played only with the left hand since an injury 30 years ago. It was hard to believe that five fingers could produce the thundering chords opening the Korngold suite. Graffman maintained an organlike presence throughout the devilishly difficult and altogether wonderful half-hour piece. Clearly, those dissing "Hollywood composer" Korngold never heard the suite, and its unique combination of "Schoenbergian" chromaticism and Romantic anguish. A breathtaking prelude, a ghostly waltz, a stomach-punching Groteske movement, a gorgeous (if deliberately distorted Lied and a stormy Rondo came and went, leaving the audience stunned for a few moments before the inevitable and appropriate standing ovations. How rich are [email protected] programs? Add to the two works above Handel's Concerto No. 15 in D Minor (with Kenneth Cooper producing thunderclaps of sound clusters on the harpsichord, an instrument supposedly incapable of such); Boccherini's Guitar Quintet No. 4 (the Eschers again, with guitarist Jason Vieaux, and castanets played by the young cellist/flamenco artist/festival staffer Marcella Prieto); and Bach's Brandenburg Concerto No. 6 — with violists Roberto Diaz, Masao Kawasaki, a dynamite cello trio of Diaz, Finckel, and Ralph Kirshbaum, plus Zhang and Cooper.

In the Boccherini, Escher cellist Janss came to the fore in the Pastorale, and all five performers hit a marvelous high point in the angry Grave assai (so not 18th century), with the "really big finish" of the Fandango.

For those whom this Aspen-size event didn't satisfy, there was a Prelude concert by the festival's International Program for young musicians. It featured Beethoven's String Trio in G Major; Mendelssohn's Andante and Allegro brillant (with supertalented Esther Park playing the four-hand piano piece alongside her coach, Wu Han, substituting for a young musician unable to perform); and the Brandenburg Concerto No. 3. Here's a significant finding on behalf of the importance of music: Look up Christian Ludwig (1677-1734) — margrave of Brandenburg-Schwedt, a high-ranking officer of Brandenburg-Prussia's Hohenzollern dynasty, and an elector-prince of the Holy Roman Emperor — and what's the first thing Google or Wikipedia says about him? "He is most famous for inspiring the name of the Brandenburg concertos." That somehow feels good. In the Prelude concert’s Beethoven and Bach, first violinists shone brightly: Katie Hyun in the String Trio, and Jennifer Caine in particular in the Brandenburg. They, and the other young artists, played with assurance and self-confidence, as previously witnessed at the festival. It was one fabulous afternoon at [email protected] (with early — and welcome — starting times of 3 p.m. and 5 p.m.), and that's not just whistling Bottesini. Superlatives are easy to recite (especially if you're lazy or careless or both), but difficult to earn. This festival does the earning, over and over again, climbing from one pinnacle to another.