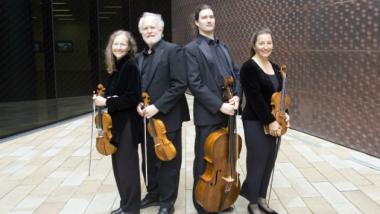 Performing without a score and as if she were communicating directly with each and every member of the small crowd at St. Mark’s Lutheran Church in San Francisco, soprano Christine Brandes took matters into her own very capable hands on Saturday afternoon.

The season-ending concert by the New Esterházy Quartet had gotten off to a wobbly start. Intonation problems, some spotty internal communication, and a largely generic reading of Haydn’s Quartet Op. 71, No. 2 had plagued the ensemble’s performance. Then, in this symmetrical all-Haydn program of two quartets and two soprano cantatas, Brandes arrived to end the first half with Arianna a Naxos. From the opening, wonderstruck lines about her absent beloved Theseus, she lit up the room with a soft glow that would later flare into full flame.

In contrast to Sasha Cooke, who over-powered her way through this piece exactly three months ago at this venue, Brandes found an elegant dramatic and musical throughline. Her Ariadne was sweetly puzzled when musing on her lover’s missing-in-action status, stirred by loyalty when it occurred to her that Theseus might be off in battle, radiant at the thought of their binding love, and wistful, in a final poignant phrase, about her own, sighing heart. The soprano encompassed this broad emotional range in the opening Adagio. There was much more to come.

Brandes supported and reinforced her musical command with a supple, compelling demeanor. Her face bloomed open with hope and touching self-deception, hardened in fury and even captured the ticking processes of thought and self-scrutiny. It was a marvelous thing to behold. The string accompaniment wasn’t always as tightly controlled, but Brandes seemed to raise the Esterházy’s game to a higher, keener level than they had brought to the opening quartet.

The effect continued after intermission. With Kati Kyme taking the first violin chair that Lisa Weiss had occupied for the first half of the program, the ensemble sounded revitalized in the Quartet Op. 55, No. 2. Most of the deficits in the earlier quartet were nowhere to be found here. Attacks and phrasing, wit and byplay folded together with a singleness of purpose.

It helped that this F Minor work is more wonderfully, weirdly engaging than the Op. 71. Opening with a set of somber variations, it proceeds through an Allegro interruptus of impulsive key changes and dark mutterings. The minuet movement, too, is striking, with its pleading second section that is more a mordant argument than a distinct departure from the first section theme. The concluding Presto is by turns playful and pristine, discursive and terse.

The Esterházy players were alert to all of these demands. Cellist William Skeen deserves special mention for the quizzical charm he brought to the piece. But this was, as any quartet performance must be, a feat of intimate union. Memories of the indifferent Op. 71 were all but swept away.

Brandes returned with another distressed woman’s lament, in Haydn’s Scena di Berenice. Shorter and less dramatically developed than Arianna, it starts with news of a lover’s death and tracks a kind of stages-of-grief response. Once again, the soprano hit her marks. She delivered an abrupt exclamation to “Stop! Live!” as a compressed, high-contrast effect of hard and soft sounds. The final aria unfurled in a cascade of sorrow, agitation, and near delirium. An earlier aria, “Non partir, bell’idol mio,” (Don’t leave, my idol) sailed by without much tenderness, a rare if fleeting opportunity missed by Brandes.

The quartet, in a transcription by Skeen, maintained the sharp edge and subtle shadings the members had just achieved in the Op. 55 quartet. Although the lesser of the two cantatas on the bill, Berenice brought the 100-minute concert to a gratifying end.