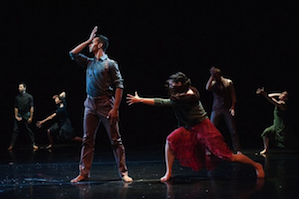 Dance that Could Stop Traffic

What are the odds? Googling the phrase “the green bride,” to see if it has something to do with the wedding symbolism of Marc Chagall, I ran across this on a ketubah, or Jewish marriage contract, web site:

A long marriage is two people trying to dance a duet and two solos at the same time.

Israeli choreographer Barak Marshall obviously knows something about this. Creator of the Los Angeles contemporary dance troupe Bodytraffic’s spectacular opener, titled And at midnight, the green bride floated through the village square, Marshall plows through the marital perplex — its pairings, passions, and put-downs — with razor-sharp, often hilarious speed and volubility. The narration originated with his mother, choreographer and performer Margalit Oved. Marshall started in the United States, went to Harvard as a philosophy major, emigrated to Israel and, it says on the site, got into dance by accident.

Well, he was made for it, and luckily so are the company’s 10 dancers (co-artistic directors Lillian Rose Barbieto and Tina Finkelman Berkett, plus eight more), paying their second San Francisco visit at the ODC Theater through Sunday. Founded in 2007, Bodytraffic’s dancing all over the place lately. New York’s Joyce Theater, commissioned the Marshall piece in 2012, and last summer the company played the prestigious Jacob’s Pillow Dance Festival.

The music for And at midnight … is Judeo-Arabic (Oved is Yemeni-Israeli), Ladino and Yiddish, with klezmer overtones. The net effect is bouncy and plaintive, like life itself. Gesturally it owes much, especially in its warmth and juiciness, to Ohad Naharin, for whose Batsheva Dance Company Marshall was in-house choreographer in 1999. The dizzying pace incorporates staccato gestures toward the face, involutions of the arms, and steps and patterns flavored with modern and folkdance idioms. The bride, not green but in an ivory nightgown, and the groom are borne overhead in a traditional chair dance minus the chairs, floating Chagall-esquely.

Too, the exchanges about farm animals between ultra-superior grooms and their brides evoke Chagall’s village paintings of goats, lambs, and chickens. The grooms describe them as “stupid” animals, and there’s no doubt that they mean their brides. Now the gents offer up recipes, their voices approaching lustfulness; the brides’ replies range from servile to hostile. What was on view was excerpted from a longer piece and still felt a bit too long. With a little more selectivity, its arrival at a wary accommodation of individuality and couplehood could be even more entertaining.

Timing is everything, and the preview of choreographer Kyle Abraham’s Kollide, coincides with his winning a MacArthur fellowship — clearly richly deserved. Abraham’s forte is an expressive push-pull quality whose stretchiness is offset by bursts of allegro movement. For all that, Kollide, a piece for three women and two men whose pairings and triplings speak of romantic couples and confounding triangles, was also distinguished by the delicious intimacy, the bravado and vulnerability, of its partnered moves.

Not to mention the audacity of one man (Guzman Rosado), either a player or a lost soul, depending on your point of view. The other fine dancers were Barbeito, Berkett, Melissa Bourkas and Miguel Perez. Set to music by Hildur Guonadottir and Valgeir Sigurdsson, it was an inspired, uh, kollision of shape and story, and I hope to see it again someday.

The final dance, o2Joy, choreographed by Richard Siegel, offered ultimate proof of Bodytraffic’s versatility, as well as a salute to its hometown movie musical past. If there was a star style missing, I didn’t notice it. To songs from the likes of Oscar Peterson, Billie Holiday, Ella Fitzgerald, and Glen Miller, Siegel barreled through evocations of Fred Astaire and Ginger Rogers, Gene Kelly and Cyd Charisse, Bob Fosse, Gwen Verdon, Donald O’Connor, Leslie Caron, Ann Miller, and maybe even Ruby Keeler and Joan Crawford. The five hoofers onstage were flashy stand-ins for a cast of thousands. In another time, the Bodytraffickers could all be Hollywood gypsies. How lucky for dance that they’ve got a real home.