The introduction to David Hallberg’s autobiography, A Body of Work: Dancing to the Edge and Back, puts us squarely at the center of his existence. “I remember what it feels like to dance,” he says, a young man with a very old man’s perspective. If you’re a balletomane, he’s got you at hello.

Hallberg, 35, who has returned to American Ballet Theatre this season after nearly four years of injury and rehab, is one of the world’s great dancers, gone from Minneapolis — where in childhood he taped coins onto the soles of his shoes to imitate the tapping of Fred Astaire on TV — to ABT, where he’s a principal dancer, and to the Bolshoi, where in 2011 he became the first American ever hired as a principal. The path to such triumphs is rarely direct, but in Hallberg’s case, it was particularly convoluted.  He managed to focus on tap and jazz until age 13, late to start ballet. With a demonic work ethic to match that of his demanding teacher, Kee Juan Han (one of the book’s dedicatees), he plunged in. He speculates that his intensity may have damaged his growing body, exacerbating his later injuries. 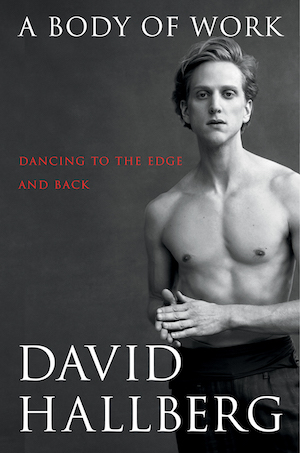 There would be psychic injuries as well. At school, Hallberg was bullied from third grade on, the other boys homing in on his ease around girls, his appearance, and the fact that he took dance classes after school. His parents went to the principal over the bullying; the principal believed the problem was for them to solve. Meanwhile, there was punching and chasing. Once, the brats poured a bottle of perfume on his head. Fortunately, there was an escape hatch: a new school for the arts in Phoenix, where the Hallbergs now lived, that combined academics, arts, and a pool of students who exhibited a fine disregard for “public school” and its sports, proms, cliques, and pettiness.

A classmate named Jack became his soulmate and his first love. He’s the only person Hallberg names in the book and he keeps his descriptions both tender and discreet. When he was 15, his mother pressed him to tell her if he was in a relationship. His parents were supportive. They knew he and Jack had often shared his bedroom, and they had kept their counsel. After confiding in his mother, Hallberg felt a weight come off his shoulders. But, she told him, they were terrified by the threat of AIDS. Hallberg, envisioning their tears if it killed him, took their concerns to heart. He stayed well, and they became activists on behalf of the gay community.

Growing up in the school of the arts under the tutelage of Mr. Han and emotionally freer to focus on his dancing, Hallberg soaked up the routine that is a dancer’s life.

His chronology is orderly but never dull, moving on to a year’s study at the Paris Opera Ballet School, followed by an invitation to join ABT’s corps de ballet, to his growing success and a life spent in New York City and in midair, guesting around the world, partnering great ballerinas, and picking up the differences between companies in New York, Paris, and Russia.

The same precision driving him as a dancer drives his ability to talk about it with candor:  fly-on-the-wall descriptions of class routine, of the combination of esprit and battle fatigue that drives dancers and bonds troupes, of professional jealousies and private relationships (after all, who will you fall in love with if you spend all your time in ballet?). Few dancers, says Hallberg, pay attention to life outside the company or to other art forms. He was able, though, to form a tremendous, even ecstatic connection with the music of class and performance, to trust in one’s mastery of technique and just dance — among a dancer’s biggest challenges.

But he also looks closely at his own downs, including the antagonism other dancers directed at him at ABT as he retreated into a chilly shell. To his credit, he unveils much beyond the physical act of dancing, about learning to balance the need for camaraderie and trust with equally necessary introspection, self-discipline, and self-containment.

His most devastating experience, though, was his interrupted career. In an ABT rehearsal, he broke the fifth metatarsal on his right leg and passed out. He was out for four months. By then he had lost even the most basic leg muscles. Rushing to rebuild, he reinjured himself and was out for two months more. With contracts at both companies, he was out of both while he worked with ABT therapists in New York to recover. He was away from the Bolshoi for 13 months. When he returned, he came back too fast. It was as if he had a mania to catch up. Within a month, he danced in Moscow, Singapore, Paris, and Sydney. Back in Paris again, he developed an itch in his left foot when he jumped. He ignored it and continued dancing, first in Russia, then in Milan. “I believed I was invincible.” In 2014, dancing in Washington, D.C. with the Bolshoi — his first U.S. tour with the Russians — his foot started killing him. It got worse in time for a show at Lincoln Center. He made it through, but he wasn’t doing the steps properly. He felt like an imposter.

Finally he had more surgery and another year of little progress. He decided to go to Melbourne, Australia, where he’d heard he might be helped. He shaved off all his hair and baldly went to war. With a team of miracle workers — doctors and physiotherapists who kept his therapy under their perpetual watch, he spent five hours a day at a different kind of non-dance dance therapy, learning how working all the muscle groups would create the healing moves that would rebuild his leg.  And when he finally was allowed ballet exercises, he was doing all the time-honored steps differently, working from the top of the leg rather than the bottom, relearning everything from square one. “I felt like my ass was sticking out. I was totally turned in.” And his therapists wouldn’t let him work on the weekends. Saturdays and Sundays he became the local park drunk, lounging on a bench and demolishing a six-pack of beer.  The weekly discipline demanded a weekend corrective, although maybe this wasn’t the best one. Mondays, he’d start over. He was driven, but he was angry at himself as well as at his two physical therapists. It got worse; he hit bottom. He had failed; he would never dance again. From his therapists and from his gut, he recovered enough to keep at it.

Then, little by little, it got better. After a year and a half, Hallberg left Melbourne and returned to New York, to ABT.

How did it go? Well, if you don’t tear up when he describes performing again for the first time, then you, my friend, have no heart.

To Hallberg, dancing was never a choice. He knew “it was something I had to do.” With luck and work, his artistry will be something we have to see for years to come.