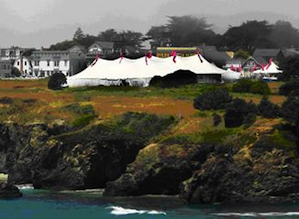 “I want people to remember why they’re artists,” declares Allan Pollack, artistic director of the Mendocino Music Festival. “I want to remind them of what it was like to be 9 years old, when they got their first instrument. Because too often, they can lose that.”

This season, a host of instrumentalists and singers are once again rediscovering the wonders of music along a charming stretch of Main Street in the village of Mendocino, with a view of the Pacific Ocean beyond the Festival’s big white tent. Pollack has been showcasing his own eclectic vitality over the course of the Festival, having kicked it off on July 12 by leading the Festival Orchestra, later conducting Don Giovanni, and rallying a big-band jazz homage to Aretha Franklin, during which the conductor reclaimed the instrument of his own youth, performing several solos on saxophone.

I drove up to join the fun on Wednesday, the fifth day of an invigorating musical journey that took this seacoast town and its artists and audiences across borders of genre, history, and geography. After a delicious dinner of locally caught salmon at the Mendo Bistro, I joined Festival Executive Director Barbara Faulkner inside the 800-seat Tent Concert Hall, whose expansive curves dominate a field in Mendocino Headlands State Park. Faulkner has sung with the College of the Redwoods Community Chorus, has taught piano in town, and has been attending the Festival since it was started in 1987 by Pollack; his pianist wife, Susan Waterfall; and Walter Green, the late former San Francisco Symphony principal bassoonist.

The last in the Festival’s BachFest series began with a clear and entertaining verbal introduction by Waterfall to Bach’s Musical Offering, composed on a theme presented to the composer by Frederick the Great, “as puzzles to be solved by connoisseurs,” of whom there seemed to be many in the Tent audience. Four canons from the composition were performed with gusto by Waterfall (on piano), Jeremy Cohen (violin), Burke Schuchmann (cello), and Mindy Rosenfeld (flute). During an intermission enhanced by nearby coffee, cookies, and other goodies, it became obvious that attendees who’d arrived in Mendocino as strangers had already become friends in the course of the Festival, sharing the same sort of aware camaraderie that had been passed among the players on stage.

The piano was repositioned for Bach’s Clavier Concerto in D Minor, with pianist Stephen Prutsman facing away from the audience and conducting a mostly standing and uniformly fine string section. Prutsman’s keyboard approach was aggressively dramatic, perhaps more in a Romantic than a Baroque mode, or possibly appropriate to the jazz genre (here involving a curious swinging of the meter) in which he sometimes works.

Attendees who’d arrived in Mendocino as strangers had already become friends in the course of the Festival, sharing the same sort of aware camaraderie that had been passed among the players on stage.

After an intriguing gourmet vegan Thursday breakfast at the Stanford Inn's Ravens', I popped in for the Don Giovanni dress rehearsal, and then chatted with Barbara Faulkner at the Festival office, a block west of the Tent. As sunlight struggled with fog outside, Faulkner testified to the event’s increasing financial stability, and to its constructive relationship with the town’s merchants and with local residents, who’ve stepped up both as donors and as hosts of visiting artists. Many participating musicians — including the majority of the opera cast — hail from the Bay Area; local instrumentalists are invited to perform under Pollack’s baton if they’ve also worked with him in the Symphony of the Redwoods, based in nearby Fort Bragg.

Featured that afternoon in the smaller, woodsy Preston Hall, adjoining the Presbyterian Church four blocks east of the Tent, was Mills College and San Francisco Conservatory faculty pianist Robert Schwartz. His rich and merry approach to Mozart’s Sonata in B-flat Major seemed to reflect the gemütlich spirit of the town’s historical homes, visible through the Hall’s large front windows. In other modes, Schwartz managed to navigate the rocky, sometimes stormy clime of Brahms’s Sonata in F Minor, and to enhance the baubles of Mendelssohn’s Lieder ohne Worte. As had been the case in the Tent, this smaller audience was rapt in listening and active in cheering and applauding.

Back in the Tent after a rollicking dinner and drink at Patterson’s Pub (a destination for musicians before and after gigs), I witnessed with a packed house the dual talents of Canadian April Verch, who trades off fiddling, in a variety of styles rooted in regions across her country and ours (including bluegrass and country), with her trophy-winning step-dancing (resembling Irish ceili but actually based in the Ottawa Valley). With Cody Walters contributing bass and claw hammer banjo and Hayes Griffin guitar and mandolin, Verch presented traditional folk and original material, including her own plaintive love ballad, called Broken, which she sang in a sweet, high, girlish voice evocative of Dolly Parton. The audience was visibly and audibly in love with her long before she thanked them for their enthusiasm and treated them to a breathtaking display of simultaneous bowing and stepping, on her last number. Verch also took care to praise the Festival crew, some of who’d prepared her a pre-gig supper on the second floor of the adjoining historical Ford House Visitors Center and Museum.

Schwartz’ rich and merry approach to Mozart’s Sonata in B-flat Major seemed to reflect the gemütlich spirit of the town’s historical homes.

On Friday, I availed myself of a delicately and delectably seasoned taco made from locally caught fish, next to the Festival office at the Trillium Café, which also provides dessert coupons to orchestra members. At Preston Hall, later that afternoon, pianist Paul Hersh, one of the Festival’s several repeated billings, was paired for the first time with his violinist son, Stefan Hersh, on Beethoven’s Violin Sonata in G Major. The elder Hersh’s calling as a teacher of poetry and literature as well as of piano and chamber music at the San Francisco Conservatory informed his fascinating verbal preface to the performance, which sweetly evoked the avian and arboreal elements visible through the Hall’s rear windows. The pianist introduced Beethoven’s Sonata in C Minor with an enthusiastic reading from the pages of Thomas Mann’s novel Doctor Faustus, which may have, in part, inspired his sometimes melodramatic solo performance of the piece, rather sacrificing precision for feeling.

Feeling worked more appropriately in the much-anticipated production of Mozart’s Don Giovanni in the Tent on Friday evening, with Romanian-born baritone Eugene Brancoveanu singing the title role, directing the stage action, and even assembling and adapting the costumes. Brancoveanu was partnered by mostly world-class female sopranos, notably the bright and appealing Kelly Britt (as Donna Anna) and the clarion and lusciously hued Adina Dorband (Zerlina). Tenor Sergio Gonzalez’ Don Ottavio was vibrant and engaging, with bass-baritone Philip Skinner doing clear and confident double duty as both Masetto and Il Commendatore. Bass-baritone Dennis Rupp proved a tuneful and wonderfully characterized boffo Leporello, though his volume never reached the compelling and alluring level of Brancoveanu’s Giovanni.

The audience was visibly and audibly in love with April Verch long before she thanked them for their enthusiasm.

This staging of Mozart’s eerie mix of tragedy and comedy was unique and fascinating, if at times confusing or static, but in any case it boasted impressive achievement on a small budget with few rehearsals. Allan Pollack and his orchestra’s accompaniment from backstage (with monitors) was well-paced, kinetic, and practically faultless. Sound engineer Peter Temple’s subtle enrichment of acoustics in the Tent was effective yet unobtrusive.

I left the village somewhat reluctantly on Saturday morning, to the sounds of a rehearsal by jazz vocalist Kim Nalley, enhanced by the big band, bouncing off the 19th-century Main Street visage of the Mendocino Hotel, opposite the Tent. The Festival’s second week offerings (some of them still available to you) will include the Calder Quartet, a Frederica von Stade recital, a program of 20th- and 21st-century music by the Festival Orchestra, the Festival Chamber Players, the Festival Chorus, and New Orleans diva Irma Thomas. Get up there while you can — it’s worth the long and lovely drive. Or plan for a more lasting indulgence in musical and natural splendor and small-town hospitality next year. I know I will.