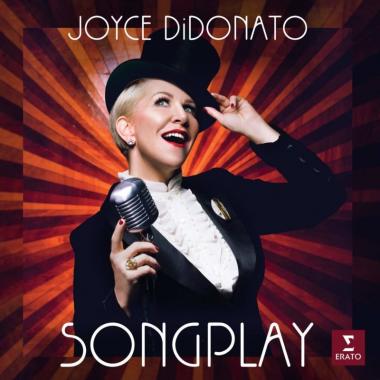 DiDonato Swerves Delightfully Out of Her Lane

The set list for Songplay suggested a high-wire crossover act, from 17th-century art songs to Leon Russell, Duke Ellington to Broadway’s She Loves Me, and beyond. But because it was the redoubtable mezzo-soprano Joyce DiDonato onstage at Berkeley’s Zellerbach Hall, the evening figured to be much more than a musical stunt.

And so it was. Dressed in an elegant kelly-green gown and presiding over a jazz combo of Craig Terry on piano, Chuck Israels on double bass, trumpeter Charlie Porter, drummer Jimmy Madison, and bandoneon player Lautaro Greco, DiDonato conjured a nightclub atmosphere that was at once relaxed and rarefied, improbable and utterly convincing. Songplay fell into a groove of its own singular making, and pulled a grateful, at times wonderstruck, audience into its warm embrace.

Presented by Cal Performances on Feb. 20, the piece used the beginning singer’s familiar 24 Italian Art Songs book as its premise. What if, Didonato and Terry mused, we gave those well-worked studies by Giordani, Caccini, Torelli et al. a fresh approach? DiDonato, who talks almost as engagingly as she sings, opened up by asking if there were any singers in the house. Hearing a good number of shout-outs, she promised, “This one’s for you, guys.”

Recalling a disastrous early singing lesson, the Kansas-born mezzo croaked and creaked her way through Giordani’s “Caro mio ben.” Then, after summoning Terry to the stage, she sang the number again, the purity of her line and precision of her Baroque ornaments gradually offset by Terry’s almost subliminal introduction of gentle jazz stylings and chord patterns as the song progressed. It was so tactful, so gracefully done that the what-if experiment became a persuasive new musical language in a matter of minutes.

Calling her musical accomplices to the stage one by one — each of whom would get ample solo time during the course of the evening — DiDonato segued from the Italian repertoire to Russell’s “This Masquerade,” back to the art songs and into a gorgeously realized selection from Jerry Bock and Sheldon Harnick’s 1963 musical She Loves Me. Almost every song was so beguiling in its own right that it only dawned on the listener slowly that these artists were performing a kind of musical transubstantiation — a water-to-wine feat that managed to honor both things at once, an intoxicating refreshment that left the original sweet taste shining through.

In Giulio Caccini’s “Amarilli, mia bella” DiDonato shaded her own lush trills with a faintly husky tone, a lovely melding that gave the song’s floral metaphors a languid but carefully controlled air. The singer called what she was doing a “mashup” at one point, but that undersold the subtlety and artfulness.

If her “Masquerade” seemed a little too tightly metered at first, Porter’s muted trumpet interpolations seemed to whisper her into a looser mode, as if the bittersweet address to a lover were happening in real time. Alessandro Parisotti’s “Se tu m’ami,” from the Italian songbook, got an infectious samba beat. A Benedetti Marcello selection came off as a smoldering tarantella.

And then there were the moments of becalmed sublimity, to piano-only accompaniment, when DiDonato lavished her extraordinary technique on the deceptively simple beauty of Giuseppe Torelli’s “Tu lo sai” and Giovanni Paisiello’s “Nel cor più mio non sento.” Her judicious vibrato and peerless breath control, the variations of timbre and airily easy ornaments all served the cause and gave each song its particular tint and emotional effect. The players, who might have vamped a bit too much on their own at times, engaged DiDonato in smart, self-effacing conversation throughout.

The singer’s “Will He Like Me?”, from the Bock/Harnick show, was a model of dramatic presentation. Unlike many classical singers who try to go out of their lane into Broadway or pop, DiDonato almost never sounded like a stranger in a strange land. Her phrases in Ellington’s “(In My) Solitude” melted together in a languorous swoon, which she snapped out of at the end with prompting from Porter’s articulate trumpet. George Shearing and George David Weiss’s “Lullaby of Birdland” got a smart uptempo reading. “Lean Away,” a tender if slightly voluble song by Gene Scheer (best known as opera composer Jake Heggie’s regular lyricist), served as a reminder that the art song as a form is alive and well today, with no updating needed.

Songplay took an expansive — perhaps too leisurely — turn at the end, with the Scheer number and Rodgers and Hart’s lengthy “With a Song in My Heart.” A swatch of Vivaldi and “La Vie en Rose,” the latter linking DiDonato and Greco’s soulful bandoneon in an excursion into nasal French, were the encores. Whatever language she was singing, DiDonato, in consort with the resourceful musicians, turned this tribute to a beginner’s songbook into a suave and moving master class.

The celebrated mezzo-soprano explores the peacemaking power of music with a new recording and touring theatrical program.

The wondrous mezzo Joyce DiDonato, now at the very top of her game, sings bel canto arias to a fare-thee-well, both the rare and the familiar, the tragic and the camp.

An Interview With Joyce DiDonato: Rossini as Her Barometer