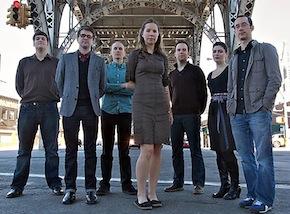 Like the universe, new American music is in expansion mode. And it’s expanding in many different directions. That much was easily gleaned at Sacramento’s Festival of New American Music.

This 10-day festival, which offers its wares for free and is an unsung gem, is held at Sacramento State University. This year the festival entered its 34th year by presenting a wide-ranging repertoire performed by the likes of Martin Bresnick, the Wet Ink Ensemble, pianist Lisa Moore, the Allegresse Trio, and the Iridium Saxophone quartet, among others.

Although the offerings seem random, the operative paradigm for festival Codirectors Keith Bohm and Stephen Blumberg is a willingness to program both the familiar and the musically profane.

The festival was kicked off with a performance by theremin specialist Eric Ross, in concert with video artist and wife Mary Ross. His short work Underground Passage set the tone for the festival — where just about anything can be expected. The piece is written for that odd electronic instrument the theremin, for which the composer drew inspiration from a 12-tone note row. As a concept Ross’ music makes for an interesting encounter, but as music it is less so, since some of his explorations of the instrument play out as nothing more than a travelogue of sound.

The festival had hits and misses, though the former outnumbered the latter. No group was more bracingly thought-provoking and expansive than the Wet Ink Ensemble. These seven New York musicians/composers are fearless in testing the limitations of what instruments or musical forms can be. Best of all, they don’t shy away from integrating the spoken word as a tasty and dramatic counterpoint to the music. That played out powerfully in the unnerving but entrancing two movements from Voices From the Killing Jar, written by vocalist Kate Soper. Here hypnotic music was defined by start and stop rhythms punctuated by Soper’s sung text and finger-caress of a cymbal. In one of the movements the text was an incantation mining the Iphigenia tale, wherein the words exclaim Clytemnestra’s wish for bloodshed.

No group was more bracingly thought-provoking and expansive than the Wet Ink Ensemble.

Unlike Wet Ink, the Kansas City–based Allegresse Trio shot for something more conventional, and wrapped it in a cloak of stellar musicianship. The highlight here was Canto and Danza, by the composer Gabriela Lena Frank. A highly punctuated rhythm saw the piano playing sculptural and round figurations that gave flute and oboe space for longer held-notes.

Each year, the festival likes to showcase a composer. This year that mantle fell to Martin Bresnick, who gave a talk on the perils of beauty without hierarchy. Several of his own works were performed throughout the festival, and none better than his Ballade, an homage to Brahms performed with a dark, taut vibrancy by the Left Coast Chamber Ensemble.

This year the festival tried new approaches to presenting new music, including live and on-demand streaming, as well as efforts to widen the new-music net by inviting more ethnically diverse acts. These included the jazz-Latin ensemble Nahual, of Sacramento, along with Bal du Kor, a West Coast trio that mines traditional and original West African rhythms in the pursuit of new music. Yet these seemed to belong more to the jazz realm than to the fields of contemporary or new classical music.

The festival closed with a new-music ensemble, Citywater, also of Sacramento. This fresh-faced sextet defines the tenor of new music in that city. The sextet has forged close relationships with composers Steven Mackey and Alexandra Gardner. For its performance much of the focus was cast on Gardner, a Baltimore composer with a deft touch at writing for the marimba and other percussion instruments. This ability played out elegantly in the round and poetic musical patterns of Ayeti, which paired a marimba with recordings made at Ground Zero shortly after 9/11.

The festival’s closing work was Gardner’s cinematic Migrations, a potent, 10-minute work whose glissandos on strings and chord clusters on the piano grew more expansive, underscoring a surprising evolution from one musical idea to the next. It was, by turns, highly lyrical music and provocative of thought.

That work made a fitting end to this festival, which aims to compel as much as to entertain. The intimate atmosphere and seeming randomness of the Festival of New American Music provides a telltale microcosm of new American music in general — music that grows more and more indefinable with each passing minute.