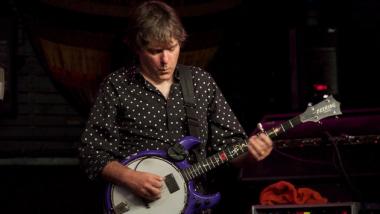 Though Hugh Hefner is gone and the long arms of the Los Angeles Philharmonic took charge of the outdoor music party that he started, the Playboy Jazz Festival continues pretty much unchanged in the vast spaces of the Hollywood Bowl.

The huge concrete amphitheater is nearly full to bursting with picnickers, partygoers, and music fans taking in 10 acts per day over a mid-June weekend (June 8-9). The front ends of the long days are still loaded with youth bands, new acts, surviving veterans from jazz’s past, and ringers from other idioms while the populist crowd-pleasers and bigger names follow the dinner hour when people want to dance. The beach balls still come bouncing out when the music turns cerebral or subdued.

But another thing that hasn’t changed is the loud, blatant, coarse, often badly-balanced sound, with the decibel levels at or near the maximum allowed in the Bowl a good deal of the time. There were times when a bassist was visibly playing an intricate pattern but all you could perceive was a single throbbing note. You can have good sound in a facility this size; they do in the Bowl’s regular season jazz series. Why not at the Playboy Fest?

While there will always be differing opinions as to how far the boundaries of jazz stretch, there is still an abundance of what I would call jazz in a festival that has long been known for diversity. In Saturday’s show, there was jazz in sax newcomer Terrace Martin’s wildly sizzling, complex groove in his take on Herbie Hancock’s “Butterfly,” and in the intelligent, intricate charts and digitally harmonized trumpet choruses of Terence Blanchard. Béla Fleck and his longtime cast of Flecktones continued to take banjo licks deep into fascinating, chromatic, electric jazz territory from a bluegrass base, with Blanchard sitting in somewhat tentatively on one number.

Probably the high point of Saturday’s show occurred during an all-star tribute to the late great drummer Leon “Ndugu” Chancler, where a string of Santana, Michael Jackson, and Weather Report tunes that Ndugu played on culminated in the irresistible, deep-pile, jazz-funk groove of George Duke’s “Reach For It.” It’s not bebop — not like spry 90-year-old tenor saxophonist Benny Golson’s engaging, straight-ahead renderings of some of his greatest hits, jazz standards all — but Dukey’s funk is every bit as much a part of the jazz family legacy.

Sunday’s program swung wildly from one idiom to another, with more overall satisfying results. Saxophonist Donny McCaslin’s high-energy, densely textured, jazz-rock set, positioned not far from his work on David Bowie’s last album Blackstar, was highlighted by Jason Lindner’s wild, propulsive, electronic space race on Prophet 6 synthesizer and Wurlitzer electric piano. That gave way to the band of Gambian kora virtuoso Sona Jobarteh, whose lovely, percolating, revolving, Afro-beat grooves could have gone on all day as far as I’m concerned.

The Cookers, an all-star septet of esteemed veterans — trumpeter Eddie Henderson, tenor saxophonist Billy Harper, and drummer Billy Hart among them — concentrated their fire on tough, Blue Note-era, post-bop circa the 1960s whose virtues seemed lost upon the crowd during the dinner hour. Right on schedule, the Dirty Dozen Brass Band woke them up with tributes to Dr. John, a beloved Playboy Fest performer who died just last Thursday (“It’s All Over Now”), and Fats Domino, with a jiggling “I’m Walkin’.” Better known for being James Brown’s saxophonist, Maceo Parker lately has been doing Ray Charles impressions with a solid big band stocked with Brother Ray alumni. Parker’s vocal impersonations grew closer to the source with each passing number.

Boz Scaggs, who turned 75 Saturday and put out a pretty good blues-based album last year, mainly fell back upon his hitmaking days in the 1970s in a disciplined yet easygoing set mostly caught in a mainstream pop time warp. But the so-called Family Stone, whose sole original member is saxophonist Jerry Martini, sounded timeless, doing a sterling job of resurrecting the extraordinary catalogue of the now-reclusive Sly Stone, with the final funk groove of “Thank You (Falettinme Be Mice Elf Agin’)” going on and on gloriously into the night.