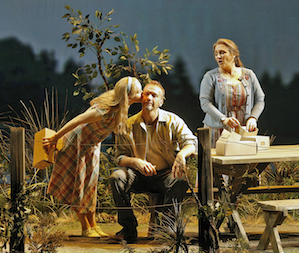 Dolores and Racette: Double Triumph Against All Odds

Tragedies of gods and kings in opera are easy to take, given the distance, and at times it's possible to focus on the drama and beauty of the music independently of the subject. What's Hecuba to us; why should we weep for her? And yet, tears are natural and undeniable when hearing Berlioz' music for Hécube.

But what if the subject is a bleak tragedy of the abuse of wife and child, murder, sustained loneliness, and despair among ordinary people, quite without the distance of Olympus or ancient Troy?

Such was the challenge met with triumph tonight at the San Francisco Opera premiere of Tobias Picker's Dolores Claiborne, the unblinking treatment of a true, raw, and difficult to take story of desperate lives. All the while, the music is not divorced from the drama, and eventually provides a measure of catharsis, unshared by the characters themselves.

The ovation Racette received after the final curtain from a large audience — including Justice Ruth Bader Ginsburg and numerous composers, including Jake Heggie — came after her stepping into the long, difficult role weeks before the premiere when Dolora Zajick withdrew, and singing faultlessly and marvelously through the opera's two-hour length.

This was also the night after one of her numerous Mefistofele appearances, all in glorious, unstinting voice, with convincing stage presence, and her usual excellent diction, so important in an English-language opera.

The instant transformation of a glamorous opera star into the frumpy, downtrodden, abused housekeeper, trying desperately to save her daughter from incest, is a theatrical coup.

Lame as adjectives such as "interesting" and "fascinating" are, they apply without anything pejorative, to Picker's music on first hearing.

Conducted by George Manahan, the SFO Orchestra had a principal role in the performance, first underlying the vocal lines, now seeming at variance with them, and then "singing their own song." Wildly and — again — fascinatingly eclectic, with jagged edges, using different voices and styles, the orchestral part of Picker's work qualifies Dolores as a first-class work.

There are a couple of arias and Dolores' final scene where the quality of vocal writing meets the level of the orchestral, but otherwise the sound from the stage is often excessively — although, considering the subject, necessarily — harsh, and bordering on ugly.

The great soprano Elizabeth Futral as Vera Donavan, Dolores’ demanding boss, and theatrically brilliant novice Susannah Biller as Selena St. George, Dolores’ daughter, heroically handle the impossibly high tessitura written for them. It's not their fault that the roles of Vera Donavan and Selena St. George, respectively, often sound screechy. Their acting, in these difficult and demanding roles, is admirable.

Just where you would expect "ugly music" (a la Elektra), for the abusive, thoroughly loathsome character of the husband, Wayne Tigges is given a few measures of quiet singing, sandwiched between all the big, hulking, threatening sounds he produces so convincingly. But as for the melting call to Orest in the Recognition Scene, don't wait for it.

Dolores Claiborne runs through Oct. 4, and I hope other companies will take a chance on this brash, defiant, successful newcomer.