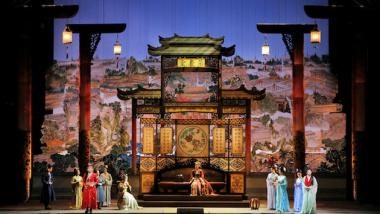 At twice the length of War and Peace and teeming with more than 500 characters, the classic 18th-century Chinese novel Dream of the Red Chamber is about as daunting a source for operatic adaptation as anyone could name. Not only does the episodic narrative demand radical pruning and selection, its very familiarity to many readers guarantees quarrels with those choices.

But opera, of course, isn’t only or even primarily about storytelling. It’s about the musical, dramatic, and theatrical realization of emotion, thought, character, history, politics, atmosphere, and more. On those terms, San Francisco Opera’s Dream of the Red Chamber world premiere, in a gorgeously evocative coproduction with the Hong Kong Arts Festival, delivers ample if inconsistent returns on its considerable investment of artistic and monetary capital. Performances continue through September 29 at the War Memorial Opera House.

Again and again during the course of this three-hour evening, powered most strongly by Bright Sheng’s expressively colorful score and Tim Yip’s ravishing production design, the audience is swept into both the imposing scale and febrile intimacy of an imperiled Qing dynasty family. The Jia clan’s impetuous male heir, Bao Yu (an utterly charming performance by Yijie Shi), falls in love with his poetically inclined cousin Dai Yu (the delicate but flinty Pureum Jo). Their romance is expressed in lyrical, long-lined, Puccini-esque duets, but growling brass or bassoon intrusions of palace reality suddenly cut them off. That kind of oscillation — from private to public, personal to political — forms the opera’s distinguishing watermark.

A veritable battalion of formidable women stand poised to protect what the young lovers’ romance threatens. Bao Yu’s Granny Jia (a murky-voiced Qiulin Zhang) may love and sympathize with her indulged grandson, but her days and powers are fading. Waiting in the wings is Lady Wang (underdeveloped by a stolid Hyona Kim), who is determined to marry the young man off to another, richer cousin (a glittering and steely Irene Roberts) and pull the Jias out of their crippling debt obligations. Living beyond one’s means, this Dream reminds us, is an age-old problem that didn’t start with high-limit credit cards.

And then there’s the tragically beautiful Princess Jia (Karen Chia-ling Ho), on home leave from her duties as the Emperor’s recently promoted imperial concubine. Like everyone else in the cast, she cuts a vivid image in opulent costumes set off by a fluidly changing set of palace arches and pillars, leafy bamboo forest hideaways and a stylized Chinese landscape painting that rises, deconstructs and reassembles as a backdrop. Stan Lai’s stage direction operates in a similarly fluent register, by turns stately and revealing.

Sheng, a composer who is well known to San Francisco Symphony audiences, is, like many in the cast, making his San Francisco Opera debut. His decisive and attractive if sometimes dogged and overly illustrative musical language combines Western tonalities with Chinese modalities and percussion punctuation (cymbals, wood blocks). He uses it to fashion some rich solos and ensembles that depict everything from formal court scenes to Bao Yu’s erotic dream. In that splendidly rendered scene, the close harmonies of a female chorus lend a murmurous intensity to the women dancers (choreography by Fang-Yi Sheu) who weave their sinuous way through the young man’s lustful visions.

Women, in all respects, dominate this Dream. With the exception of Shi’s youthfully vaulting tenor voice, along with a few contributions by supporting players and male members of the San Francisco Opera Chorus, female voices hold the stage. While co-librettists Sheng and the playwright and screenwriter David Henry Hwang may have fashioned an empowering feminist view of a patriarchal society, the vocal timbres grow wearisome and limited as the opera proceeds. A male voice and character — perhaps the absent Jia father or the Emperor — would supply the needed musical and dramatic counterweight.

That’s not the only liability of the problematic libretto. Too often, in both dialogue and commentary, the English text (buttressed by both English and Chinese supertitles) instructs the listener on the meaning and lessons of the action. In some ways that’s inherent in the source material’s fable-enhanced qualities. The opera appropriates the novel’s Stone and Flower tale as prologue and prefigurement of the main action.

But by adding a narrating monk (Randall Nakano in a speaking role) and a kind of meta-opening chorus in which the singers refer to themselves as performers and plainly foreshadow the story’s end, Dream is weighted down by its triple framing devices. Paring some of that away — the avuncular narrator is one obvious candidate for excision — would deliver a more immediate and dramatically effective impact, even if the few plot twists in the story are plainly telegraphed.

Like The Bonesetter’s Daughter, San Francisco Opera’s 2008 adaptation of the Amy Tan novel, Dream of the Red Chamber is a cultural event that in some ways transcends its own intrinsic strengths and limitations. Seeing and hearing this company of international singers, in a story with deep resonance in China and beyond, widens the lens of what opera can and should do to thrive in an increasingly global age.

From his first gamboling entrance to a final coup that sends him hurtling from youthful naivete to rueful old age, Shi’s vital Bao Yu is a singular and distinctive creation. At once touching and funny, truthful and vulnerable, he is a spoiled young poet who is also wise and self-aware beyond his years. He’s not quite like anyone else in opera, a flexible reed with roots that go centuries deep. That’s both the fragile flower and the sturdy promise of San Francisco Opera’s Dream.