Back in 2012, Gustavo Dudamel set out on one of his “crazy” (his word) projects, perhaps his craziest — a cycle of all nine completed Mahler symphonies, plus the Adagio from the Tenth and Songs of a Wayfarer, over a span of 24 days in Los Angeles. Then he immediately did it all over again in Caracas in an even shorter period of time.

Some of the performances were great, a few misfired, most placed somewhere in the middle. It was all too much, though, and since then, Dudamel has parceled out his revisits to Mahler in more scattered, more easily assimilated portions.

Nevertheless, a mini-reprise of the marathon of seven years ago started up at Walt Disney Concert Hall over the past weekend when Dudamel led the Los Angeles Philharmonic in four performances of Mahler’s Symphony No. 9. Next weekend, he returns to Mahler’s Symphony No. 1 for four performances and then takes both works on the Phil’s Asian tour later this month. Not so crazy, perhaps, but still an indication of how central Mahler is in Dudamel’s repertoire.

The Ninth Symphony was the only L.A. performance in Dudamel’s Mahler Project that made it onto a recording (Deutsche Grammophon), so we have a ready reference as to how much his approach has evolved, if at all. It was noticeably faster on Sunday afternoon, knocking five minutes off the 2012 timing of the entire work, a significant amount.

Dudamel kept the first movement moving steadily forward, with more control over the wild, noisy cataclysms, the once-sharp lunging for effect now gone. For some reason, the movement’s four-note motto three-fourths of the way through was now played on a Nord synthesizer instead of tubular chimes; it produced a dull bonging sound reminiscent of Wagner’s original bells for Parsifal at Bayreuth. 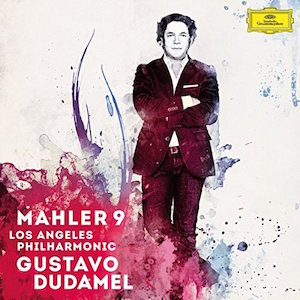 The second movement got off to a faster clip than before, the rhythms springy and lively, the feeling of the dance always present. The Rondo Burleske bristled just as jaggedly and energetically as it did in 2012, while slowing for the melodramatic climax midway. Dudamel is one of the few conductors who observe and push to the max all three of Mahler’s progressively faster acceleration markings in the mad dash to the finish line, and it resulted in an even more tremendously explosive payoff this time.

The Adagio finale mostly pushed forward more at an Andante pace, with the LA strings making a thick, bright, not too lush sound. Only in the ethereal Adagissimo last page did Dudamel really stretch things out, trying to reach infinity, letting his arms drop very, very slowly for about 40 seconds after the last note in order to prevent instant applause (one errant early clapper notwithstanding).

There is more assurance and authority in Dudamel’s direction of the Ninth now after several passes through this soundscape since 2011. He is physically more controlled, feet mostly planted firmly in one place, getting more done with less motion. The orchestra’s playing was wonderful, with a special nod to the secure horn section.

What I still don’t hear in Gustavo’s Ninth is deep, introspective soul. His Mahler excites the senses and sweats the details, but it doesn’t grab you by the throat or put you through an emotional wringer. The late Pierre Boulez, of all people, could do that with the LA Phil; his Ninth at the 2003 Ojai Festival remains the single most affecting live performance of the piece that I have heard from this orchestra.

The first performance of the Ninth Thursday, incidentally, was dedicated to the memory of André Previn, the LA Phil’s former music director who passed away that morning. Previn wasn’t exactly a Mahler man — the Fourth Symphony was the only one in his repertoire — but it was a nice gesture for a great musician who resigned from the Phil on such regrettably acrimonious terms in 1989.

The Santa Rosa Symphony’s music director bows out with a strong reading of Mahler’s epic Ninth.

Recovering and Refreshed, MTT Returns to His Hometown Orchestra in L.A.

Robert Glasper Reimagines Duke Ellington From the Jazz Side

Die Tote Stadt Gets a Vibrant Rebirth on DVD