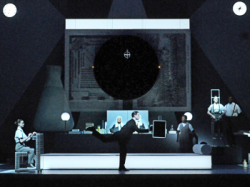 When the members of the Florentine Camerata set out, in the 16th Century, to recreate Greek drama, they couldn't have imagined what their new genre, opera, would look like a few centuries on. They couldn't have predicted the florid opera of the Baroque era, Wagner's through-composed epics, or Berg's twelve-tone expressionist masterpieces.

And they certainly couldn't have predicted or imagined Robert Wilson and Philip Glass’s Einstein on the Beach, an opera that intentionally defies all standard operatic conventions. It’s a four-hour opera with only one extended vocal solo and a pair of duets. Instead, the bulk of the vocal music, the usual focus of an opera, is for a chorus of just twelve voices. It uses amplification, both out of need — Glass's characteristic paired organs can be overpoweringly loud — and to selectively submerge or surface particular musical layers.

An ensemble of only seven players performs the music, despite the scale and length of the opera. The libretto has no obvious plot or direction and is pieced together from texts by several individuals, including Wilson, choreographer Lucinda Childs, Samuel M. Johnson (who performed in the first production), and poet Christopher Knowles. Two long dance episodes form centerpieces of the work, rather than interrupting the action as operatic ballet so often does.

Einstein on the Beach, which has achieved legendary status, made its long-overdue West Coast debut this weekend, in three sold-out performances at Zellerbach Hall in Berkeley, sponsored by Cal Performances. At the close of Friday's performance, after nearly five hours, the crowd quite rightly cheered it to the rafters. One can only guess at the degree of concentration and ongoing physical conditioning required of the performers.

As impressive as the sheer physical effort was, the cast, which has been rehearsing and performing together for some months now, put the work across with utter conviction and integrity, providing an integrated theatrical experience of exceptional power and considerable delight. And this was not in spite of, but because of the quirks of the piece.

Both audience and performers are set adrift in Einstein, and it's incumbent on the audience to simply observe and absorb Einstein on a subconscious or subverbal level. The highly repetitive libretto, mirrored in Glass's highly repetitive score and in the actors' repetitive gestural language, conveys little in the way of plot or structure. What, after all, can be made of lyrics such as “One two three one two three one two three”? Instead, the themes and what little there is of narrative are carried by the sets, the music, and the actors' physical movements.

Einstein consists of four acts, divided into five Knee Plays — the connective tissue of the opera, all performed by the brilliant actors Helga Davis and Kate Moran — and nine scenes, called Train; Trial (Bed); Field (Space Machine); Train; Trial (Bed)/Prison; Field (Space Machine); Building; Bed, and Space Machine (Interior). The program helpfully reproduces a charming 1976 Robert Wilson sketch of the sets for each of these 14 scenes, providing visual signposts if you find yourself disoriented by the nonlinear narrative.

Albert Einstein is a character of sorts, but he's directly visible only in a couple of photographs and in the person of a solo violinist, here heroically portrayed by Jennifer Koh, fiddling madly, and splendidly, from a chair perched above the orchestra pit. The great physicist is more of an idea than anything else, represented by dancers and actors who pencil calculations in the air or gesture, over and over, as if using an adding machine. A photograph of equations is projected on a backdrop at one point, and also a photograph of the youthful Einstein seated on what seems to be a photography studio set of a beach. And twice, a dancer lifts a large seashell to her ear and listens closely, rapt with delight and completely still. This is all you get of beaches.

Einstein is also represented by the results of his work. If Einstein has a climax, it is the startling brief and quiet scene in which a model airplane climbs diagonally across the stage, and a scrim comes down that details the workings of an atomic bomb. This follows the most frenetic and visually overwhelming scene, Space Machine (Interior), in which most of the cast is on several levels of scaffolding frantically gesturing in front of blinking light patterns, while an elevator occupied by a young boy goes up and down on one side of the stage and a horizontal elevator moves another cast member back and forth across the stage. It's quite a scene, and the quiet climax, and end of the opera, are shocking as a result.

Einstein belies Wilson's reputation for devising static stagings with little movement (for example, his Metropolitan Opera Lohengrin). While the movements you see are highly stylized, over the course of the opera, its grammar becomes somewhat clear, or, at least, with familiarity comes the suggestion of clarity. For one scene, my notes wondered whether the particular gestures used were sempahore, martial arts, writing, or train signals, because a locomotive comes slowly on stage, then retreats. 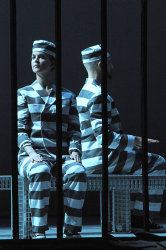 For the second run of Einstein performances (in 1984), choreography by Lucinda Childs replaced that of Andy DeGroat, and it's that choreography that has been recreated for the current production. The two long dances are a complete joy to see. They're plotless but deeply integrated with Glass's music, with dancers sometimes going in and out of phase with each other, in the way that some minimalist movement goes in and out of phrase. The dancers also use a distinct repertory of gestures that seem keyed closely to the music. The entire troupe performs magnificently and tirelessly, and it's also delightful to see their physical variety, so different from the attempted uniformity of classical ballet.

As for the music, it is typical Glass, with many arpeggios, repeated fragments, and minor variations, contrasted with several sections of Bachian complexity and a long, bluesy tenor saxophone solo, played with jazzy authority by Andrew Sterman. Divorced from the visuals, the score would lose much of its force and power – but it is absolutely perfect in context, the small instrumental ensemble and singers offering the needed contrast and variety.

There's more plot, and activity, in Einstein on the Beach than can possibly be detailed here. An article by Hilton Als in a recent issue of The New Yorker talks about Wilson's life and career and the genesis and history of Einstein. It is very much worth reading.

As any number of preview articles have mentioned, the current touring production is likely to be the last supervised by the creators, given their ages and the expense of staging Einstein on the Beach. If you're lucky enough to have a ticket, go with an open mind and you will surely have a good time: I only wish I'd gotten tickets to two of the Berkeley performances.