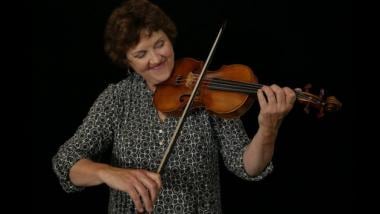 to amending some 18th-century musical history.

One matter was rather technical and arcane — a performance of Haydn’s Symphony No. 91 based on a newly discovered score at odds, in various places, with the standard published edition. The other issue was ostensibly more substantive. In opening the program with Adalbert Gyrowetz’s 1783 Symphony in F Major, Music Director Nicolas McGegan introduced listeners to a prolific composer (40 symphonies, 30 operas, 19 masses) with whom most were undoubtedly unfamiliar. 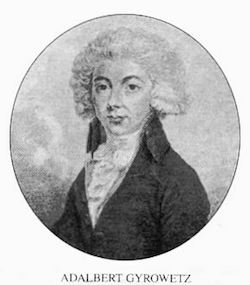 Even the composer, who knew Mozart and Chopin and many other musical luminaries of his long life (1763-1850), was aware of his Salieri-like fate. As quoted in a program note, Gyrowetz said this of his own obscurity: “What a peculiar feeling it is to remain alive and yet realize that one is already spiritually dead.”

It would be fun to report that Philharmonia Baroque had uncovered a buried treasure. But based on this admittedly small sample of an apprentice work — the composer was 20 years old at the time he wrote it — Gyrowetz doesn’t seem poised for a full-on revival. Heard at Herbst Theatre on Saturday might, this four-movement symphony labored under a paucity of thematic invention and absorbing musical ideas.

Yes, there were patches of Mozart-like development, especially in the Andante and Rondo Finale. The opening waltz Allegro danced through several deftly linked key changes. Some teasing rhythmic felicities brightened the scene. And a spot of drama emerged here and there, with a sudden stop and change in direction.

But none of it added up more than the sum of its largely indifferent parts. Nor did it help matters that the orchestra seemed a little disengaged. The strings sounded fuzzy and tentative in the early going and in stretches later on. The horns had their share of misadventures. Passages that called for a leaner, crisper sound didn’t always get it.

Gyrowetz — or almost anyone else for that matter — was bound to suffer by comparison in a program that included a mature Haydn symphony and Mozart’s Violin Concerto No. 5 (“Turkish”), with a sterling solo performance by local heroine Elizabeth Blumenstock.

From the arresting opening measures, in which the soloist first joins the other violins and then ventures off in a searching, exploratory subject of her own, Blumenstock was in fine form. She was pungent and playful in the opening movement, grave and shapely in the long-lined Adagio and full of verve and grit at the end. McGegan and the band were with her all the way, pulling out the stops with a bow-snapping drive and momentum in the closing Rondeau.

Closely aligned as orchestra and soloist were, despite some intonation lapses now and then, Blumenstock was at her very best on her own, in the probing, expansive cadenzas. She was patient, full of candor, and often dramatically deployed rubato, without milking anything for unearned effects. Her second-movement solo was particularly fine, an introspective meditation that made the orchestra’s return feel like an affectionate consolation. It was an altogether lovely and expressive reading of the piece, greeted with a sustained and well-earned ovation.

The Haydn symphony filled the second half of the evening, and did so amply. The performance got off to a strong start, with a robust and full-throated first movement, which rises from its Largo opening to a sturdily built and richly textured Allegro. Bassoonist Andrew Schwartz made the most his burbling solo turn in the Andante variations, laid in high relief by the stylish, clipped phrasing in the orchestra. Schwartz added more color in the tautly rendered Minuet, with flautist Janet See providing some added sheen. The closing Vivace reprised the virtues of the first movement.

Even if the headliners made Gyrowetz the forgotten man at the front end of the bill, McGegan deserves credit for expanding the 18th-century envelope. Newcomers from the past, no matter how modest their contributions, are always welcome.

Correction: The credit for the photo of Elizabeth Blumenstock belongs to David Tayler, not David Taylor, as was listed when the article was originally published.