When the Israeli-American cellist and YouTube master-class favorite Inbal Segev commissioned a new piece from British composer Anna Clyne, it’s not certain that she was deliberately looking for a companion piece to the often-played Elgar Cello Concerto. But this shoe fits fairly neatly, for Clyne has come up with an enticing new concerto that she calls DANCE which makes a good coupling for the Elgar concerto on a just-out CD (Avie).

At first glance, the word “dance” might be misleading, for there is nothing dance-like in a literal sense that I can hear anywhere in this piece. Rather, the basis for the title is a pithy poem by the 13th-century Sufi mystic Rumi that determined the concerto’s five-movement structure and is worth quoting in full: 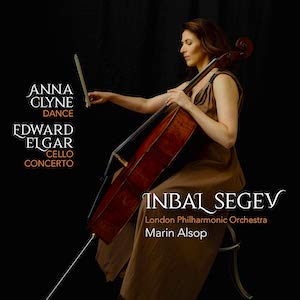 Accordingly, the opening movement mainly consists of a long, serene, elegiac line way up in the cello’s high range that gives way to a second movement of mostly agitation and aggression, with a hint of Shostakovich in softer focus. The next two movements are process pieces; the third almost resembles a ruminating minor-key Baroque passacaglia as the cello line gradually ascends in register with each return of the pattern, and the fourth builds fervently as if the sections of the orchestra act as a giant loop processor, piling on one line after another. The finale pulls everything together with a solemn tune that finally blossoms with a yearning Hebraic flavor aimed squarely at the soloist’s heritage (and the composer’s, since her father happens to be Jewish).

DANCE could catch on with cellists looking for a very attractive, thoroughly tonal, audience-friendly piece beyond the handful of standard cello concertos. Playing on a luscious-sounding 1673 Ruggeri instrument, Segev makes a persuasive case, backed by the London Philharmonic under Marin Alsop. (Interestingly, the world premiere was given at the 2019 Cabrillo Festival, which Alsop led for 25 summers, but with current music director Cristian Macelaru presiding.)

In the wake of the Clyne concerto, with the minor-key Hebraic tune arriving at a major-key final chord, the opening of the Elgar concerto seems to plunge uncannily back into the gloom — different language, similar mood. From there, Elgar goes his own way, but the point has been made how well these British concertos of roughly similar length fit together. Segev concedes nothing technically and in warmth of timbre to the better-known brand names in the Elgar discography, and she and Alsop have a unique (so far) coupling to make their version stand out in the physical and digital domains.