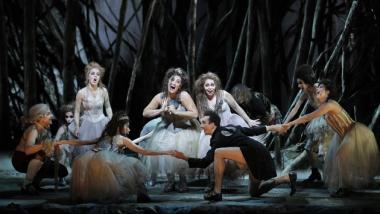 Hoisting their skirts, rubbing their thighs and bellies, and cheerfully accepting the attentions of all comers from behind, the singing and dancing wood nymphs in the opening scene of San Francisco Opera’s Rusalka are a free-limbed, free-spirited, even a free-love group. Their rampant physicality commands attention from the get-go of Antonin Dvořák’s 1901 opera.

More importantly and sustainingly, it sets the terms for this capacious and captivating production at the War Memorial Opera House. Everything from the highly characterized singing to the moodily compelling design elements to the lush yet keenly honed reading of the score, under conductor Eun Sun Kim’s baton in her fine company debut, registers in a vividly visceral, emotionally penetrating way. Even a shower of rose petals, fanned to maelstrom by a trio of menacing crows during a castle ball, has an active charge. Nothing feels or sounds gratuitous; just about everything, across three-and-a-half musically and dramatically absorbing hours, seems essential.

Jaroslav Kvapil’s multiply-sourced Little Mermaid libretto, based on (among other works) Friedrich de la Motte Fourqué’s novella Undine, lays out the heroine’s Faustian bargain for love. The water-bound Rusalka (the formidable soprano Rachel Willis-Sørensen in her role debut), longing for the thrill of human flesh and the transforming power of a soul, defies the warnings of her father (a stern but affecting Kristinn Sigmundsson in the bass water goblin part of Vodnik) and summons the witch Ježibaba to strike a deal.

Sung and played with cackling, cauterizing sarcasm by mezzo Jamie Barton, the witch grants Rusalka her wish, with the condition that she not speak to her beloved terra firma Prince (company stalwart Brandon Jovanovich, rallying from a slow start at the opening matinee to tap a potent heldentenor vein). The results are predictably, painfully tragic.

Familiar as it is, from the Hans Christian Andersen fable to the Disney animated feature to a perfervid San Francisco Ballet version (revived at the Opera Hose earlier this spring), the Little Mermaid scenario has an uncanny power to entice, startle, and unnerve. In its overall design and vividly rendered details, the Dvořák score, sung in a consonant-rich Czech, takes full measure of the breadth and depth of the story.

There are passages of ravishing, long-lined lyricism, most famously in the heroine’s Act One “Song to the Moon” but by no means limited to that. The composer is a great scene painter, whether with watery flutes, a shimmering harp, plangent woodwind meditations, alarmed outbursts from the strings or a hunter’s eager, hopeful horn in the distance.

The music has a cumulative force, culminating in a duet for Rusalka and the Prince of such excruciating tenderness and bone-deep truth that the Liebestod of Wagner’s Tristan and Isolde can’t help but come to mind. Willis-Sørensen and Jovanovich delivered it in great waves and lamenting eddies at the opening performance.

Credit for how Rusalka came off at the Opera House is widely shared. First presented at the Lyric Opera of Chicago, David McVicar’s production (re-staged here by Leah Hausman) yokes entrancing atmosphere to psychological and dramatic insight. The first and third acts take place in a swampy, liminal realm between water and earth, myth and materiality. A swarm of bare tree trunks and exposed roots, played off against mighty stone barricades bordering the stage, dominate John Macfarlane’s set. Fog-laced stage traps and lifts conjure the lake’s dangerous, alluring depths.

When Rusalka surfaces, she finds herself in the gilded austerity of the Prince’s castle, with hunting trophies and a romantic rival (the calmly calculating soprano Sarah Cambidge) bearing down her as she remains duty bound not to speak. (It’s one of the opera’s enlivening paradoxes that the title character is largely mute through the second act, even though she’s onstage virtually throughout.)

The title role poses numerous challenges, both musical and theatrical. If Willis-Sørensen’s sometimes self-consciously studied acting doesn’t quite embody Rusalka’s fish-out-of-water alienation, her singing more than compensates. Blending gleaming high notes with the deep shaded coloring that borders on mezzo territory, she draws a dramatic arc with her voice. Her hopefulness is heartbreaking, her determination clear, her suffering absolute. Even when the direction forces her to clamber awkwardly onto a tree root to deliver her “Song to the Moon” pinned in place, Willis-Sørensen sends her shining phrases aloft.

Everything has amplitude and authority. The young lovers are reckless, selfish, nakedly exposed. Their grizzled seniors look on with gleeful menace (Barton’s Ježibaba) or rueful knowing (Sigmundsson’s Vodnik). Both the character dancing by a troupe of eight and a formal ballet, tellingly integrated into the story, add an animating dimension. Bass baritone Philip Horst and mezzo Laura Krumm are both admirable and convincing as a posturing game keeper and innocent, doomed kitchen boy, respectively.

The costumes (Moritz Junge) and lighting (David Finn) are at once evocative and precise. A hellish kitchen scene, which makes a raw turkey the center of attention, strikes one of several pointedly comic notes in the staging.

Rusalka, the last and clearly best of the company’s three summer productions, is a triumph in all ways. This wonderfully wrought work, last seen her 24 years ago, has returned to the San Francisco Opera stage in a stirring, disturbing, exhilarating way, sure to etch itself in the audience’s memory.

Like Water for Opera: Dvořák’s Rusalka Comes to the War Memorial

The lovely, tongue-twisting Czech libretto offers a challenge to the singers — and their coaches.

The singer shares the buzz about her upcoming role with S.F. Opera.

Some repertory staples get a makeover and fresh casting, while The (R)evolution of Steve Jobs gets its local premiere.